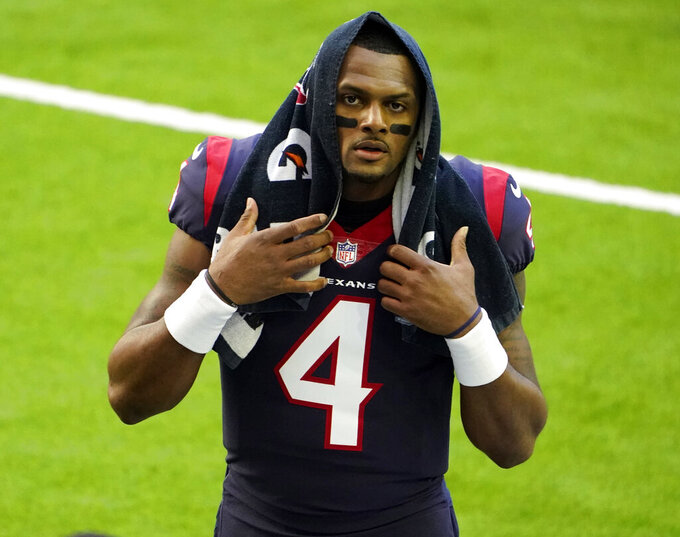 FILE - In this Jan. 3, 2021, file photo, Houston Texans quarterback Deshaun Watson walks off the field before an NFL football game against the Tennessee Titans in Houston. The Texans enter the draft with uncertainty at quarterback after 22 women have filed lawsuits since March 16 alleging that they were sexually assaulted or harassed by Watson. Houston police and the NFL have said they are investigating the allegations, leaving his future with the team up in the air. (AP Photo/Eric Christian Smith, File)

HOUSTON (AP) — The Houston Texans addressed needs at quarterback and receiver in the NFL draft despite tying a franchise low with just five selections this year.

Houston entered the draft without a first- or second-round pick because of its 2019 trade with Miami for left tackle Laremy Tunsil. New general manager Nick Caserio then made multiple trades on the last two days of the draft to leave them with even fewer picks.

“I just try to add good football players that are good people, that aren’t afraid of competition, that are selfless and are tough, and they have certain skills or attributes relative to their position that we think they can add to our team," he said. “And now we can look to improve and develop them."

Caserio is a general manager for the first time after being hired by the Texans in January following almost two decades as an executive with the Patriots. He took over for Bill O’Brien, who was the team’s coach and general manager until he was fired following last year’s 0-4 start. David Culley was hired as coach after last year's 4-12 season.

Caserio revealed after the draft that Culley's father died this week at age 94, and that Culley also lost his high school coach in the last few days. But he still helped with the draft.

Houston used its first pick in the draft to grab Stanford quarterback Davis Mills at No. 67 overall. The addition of Mills gives the Texans some depth at the position if Deshaun Watson can’t or won’t play for them this season.

Watson is facing an uncertain future after 22 women filed lawsuits alleging they were sexually assaulted or harassed by the quarterback. He also requested a trade early this year, unhappy with the direction of the team.

The Texans traded two picks this season and a fourth-rounder next year to move up to 89th for Michigan receiver Nico Collins on Friday night.

Houston stayed with offense for its first pick Saturday, selecting Miami tight end Brevin Jordan in the fifth round at 147.

The Texans then made two more trades to move up to nab their first defensive pick of the draft in TCU inside linebacker Garret Wallow. Houston traded picks No. 203 and No. 212 to the Bills in exchange for No. 174, and then traded that pick and No. 233 to the Rams to move up to No. 170 for Wallow.

“It's just the first step of what we’re trying to do this year," Caserio said. “And there’ll be other opportunities, hopefully, for us to continue to improve our team."

It's the second year in a row in which the Texans drafted just five players.

FILLING IN FOR FULLER

The Texans needed a receiver after Will Fuller signed with the Dolphins in free agency. The 6-foot-4, 215-pound Collins is a completely different player than the speedy and much smaller Fuller. But the Texans believe he has the tools to develop into a top NFL target.

Collins opted out of the 2020 season after grabbing 76 balls for 729 yards and seven touchdowns in 2019 for the Wolverines. That came after he had 632 yards receiving with six TDs in 2018.

Jordan joins a crowded group at tight end, with six players at that position already on the roster. Jordan Akins is the returning starter after he had 37 receptions for 403 yards and a touchdown last season.

Jordan was a three-year starter for Miami, where he had 105 receptions for 1,358 yards and 13 touchdowns.

After Wallow, the Texans added another defender by drafting Arizona defensive tackle Roy Lopez in the sixth round with the 195th pick. The 6-2, 312-pound Lopez spent four seasons at New Mexico State before transferring to Arizona last season as a graduate student. He had 18 tackles, including four for losses, in just five games last season.

Wallow had a productive career with the Horned Frogs, finishing with 295 tackles in four seasons. He had 90 tackles, including nine for losses, and three forced fumbles as a senior last season, earning first-team All-Big 12 honors.