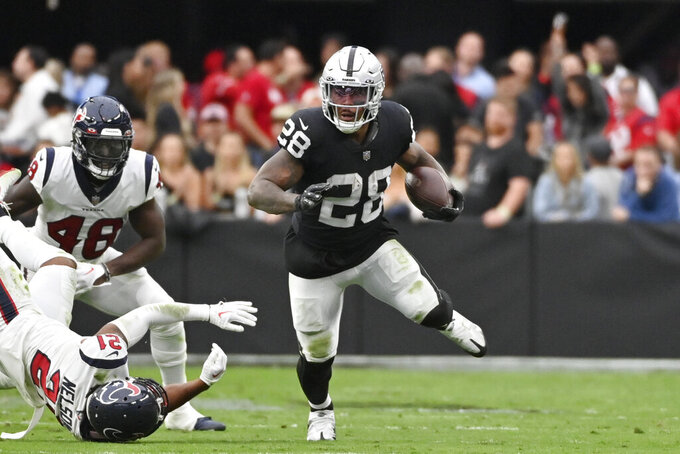 Las Vegas Raiders running back Josh Jacobs runs with the ball during the first half of an NFL football game against the Houston Texans, Sunday, Oct. 23, 2022, in Las Vegas. (AP Photo/David Becker)

LAS VEGAS (AP) — The Houston Texans led the Las Vegas Raiders by three points entering the fourth quarter on Sunday before one of their big weaknesses — run defense — cost them the game.

Josh Jacobs had a standout performance, rushing for 143 yards and three second-half touchdowns, including two in the fourth quarter.

“We didn’t play good enough defense today, so you can fill in the rest of the blanks,” Houston coach Lovie Smith said. “They got the run going, of course Jacobs is a heck of a back. But breakdowns, tackles, just weren’t physical enough at the end. There’s a lot of things, gotta give them a lot of credit for that. They definitely deserved to win today.”

Las Vegas finished the game with 400 yards of offense and averaged 7.3 yards per play. Jacobs trampled the Texans with 14 of his 20 rushes going for 5 or more yards.

While Smith said his offense made “a step in the right direction,” his defense is moving the opposite way.

“Defensively, just didn’t play well enough,” Smith said. “We gotta play a lot better than we did, but we’ll keep pushing on.”

Houston came in with the fourth-best red-zone defense, having allowed seven touchdowns in opponents' 18 trips inside the 20-yard line. But Las Vegas, which had the sixth-worst conversion rate coming in, was 3 for 3 in the red zone.

Houston allowed 149 yards or more on the ground for the fourth time.

Smith, in his first year coaching the Texans, was the defensive coordinator last season when Houston finished 31st in the NFL in run defense.

Houston came in off a bye that followed its first win of the season. The Texans' upcoming schedule includes three teams with strong running games: division rival Tennessee and undefeated Philadelphia at home followed by a visit to the surprising New York Giants (6-1).

The Titans' Derrick Henry, the Eagles' Miles Sanders and the Giants' Saquon Barkley all ranked in the top 10 in the league in rushing yards entering Sunday.

Adding injury to insult, the Texans lost tackle Maliek Collins to a chest injury during the game. Collins will be reevaluated when the team returns to Houston.

“It’s important, believe me. It’s important to us,” Smith said about fixing the run defense. “It hurts when you lose Maliek Collins. ... We’ll keep working. Eventually, we’ll get it right. Didn’t work today. Don’t know what else to tell you besides that, you’re kind of stating the obvious. Hadn’t played the run well, didn’t play it well today. We’re gonna work to get it right.”