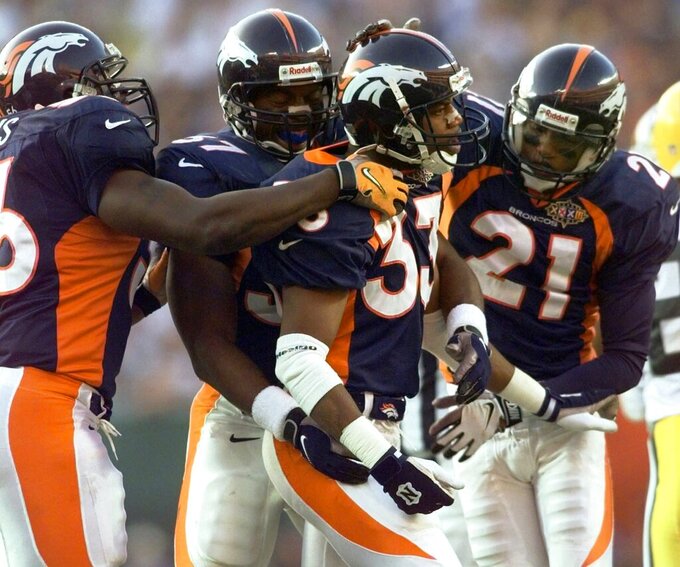 Dedrick Dodge has two Super Bowl rings — not bad for a guy who was working at an Anheuser-Busch plant after his Florida State career.

So how did Dodge go from being passed over by every NFL team on draft day to blitzing Brett Favre on a fourth-and-6 with 32 seconds left in the 1998 Super Bowl?

His answer: the World League of American Football.

Thirty years ago, Dodge joined the London Monarchs in the inaugural season of the NFL-backed WLAF, which later became NFL Europe. The Monarchs went on to beat the Barcelona Dragons 21-0 in the first World Bowl — played before 61,108 fans at Wembley Stadium.

Leading up to next month's 30th anniversary of the league's first game, the Monarchs recently got together on Zoom to reminisce.

“Once you win a championship, it’s forever. It doesn’t matter what level it is,” said Dodge, now a 53-year-old world history middle-school teacher outside Atlanta.

The spring league, popular in Europe but a television ratings bust in the U.S. at the time, gave former college players and castoffs opportunities to impress NFL teams.

After the 1991 World Bowl, Dodge signed with the Seattle Seahawks and later joined the San Francisco 49ers, Denver Broncos and San Diego Chargers. He was a backup safety but stuck with teams as a high-energy special teams player.

He won a ring when the 49ers routed the Chargers 49-26 in the 1995 Super Bowl. Three years later, after Favre’s fourth-down pass fell incomplete, John Elway took a knee and the Broncos were champions, beating the Green Bay Packers 31-24.

“No amount of money can buy those types of moments that I was fortunate enough to be a part of, but you have to get the opportunity,” Dodge said. “Where did it come from? It came from when I got the experience to play for the Monarchs, and that’s what got me back in the NFL.

“If not for London, I don’t know if I ever get a shot back in the NFL.”

The league lasted just two seasons in its original form featuring three teams in Europe, six in the U.S. and one in Montreal. It returned as NFL Europe, continuing until 2007.

The NFL had staged regular-season games in London every year since 2007 but moved last year’s international games back to American stadiums because of the coronavirus pandemic. Two games had been planned at Wembley and two at Tottenham’s home stadium. The league plans to resume the international schedule this year.

The NFL and Tottenham have a long-term agreement for hosting at least two regular-season games each season. The Premier League club’s new stadium features a retractable grass field with an artificial surface underneath to be used for American football.

Back in 1991, the World League had high hopes. When the Frankfurt Galaxy hosted the Monarchs in the season opener, a helicopter landed on the field and league president Mike Lynn emerged to deliver the game ball.

Ultimately, it was short on quality. TV sportscaster Brent Musburger, who called the World Bowl for American audiences, said before the finale that it lacked star power.

But the European teams — especially the Monarchs — enjoyed strong support. The NFL had been staging pre-season games at Wembley in the years prior.

“The English fans took to it magnificently,” said Glen Schild, who oversaw the Monarchs’ stats crew in 1991. “It was exciting times.”

Schild, who now operates a stats company that works with the NFL each season, took note of the camaraderie among the Monarchs.

“Living together in a strange country for them for the time they did meant that they were really close-knit and they had strong bond, and that showed when they played football,” he said.

The players lived in a dorm in Bushey, outside London. Dodge’s teammates included former Maryland quarterback Stan Gelbaugh and running back Judd Garrett, whose brother Jason was QB for the league’s San Antonio Riders. Jason went on to back up Troy Aikman and later became head coach of the Dallas Cowboys.

“We felt like celebrities,” said Dodge, who also coaches football. “They brought that soccer energy to the stadium. They sing all game, they chant all game and you feel that energy. It really fed us.”

For the World Bowl, the league had hoped to have a larger crowd than the first Super Bowl in 1967 but it came up short. It wasn’t the most exciting final, according to reports at the time, but The Associated Press noted its “carnival atmosphere.”

Tony Rice entered in the second half for Barcelona, down three scores, and led the Dragons on their longest drive but Dodge stopped the former Notre Dame QB on a fourth-and-3 near the goal line.

Players climbed the stairs to the Royal Box — though no royals attended — to receive the trophy from Lynn, the league president.

Dodge's last season was in 1998 — two years before Tampa Bay Buccaneers quarterback Tom Brady was drafted. He’s pulling for the “older guy” in the Super Bowl when the Bucs host Patrick Mahomes and the Kansas City Chiefs.

He still has his Monarchs jersey on his wall. The Super Bowls weren’t bad, either.

“I owe it all to the experiences I had in London,” Dodge said. “Big up to London.”