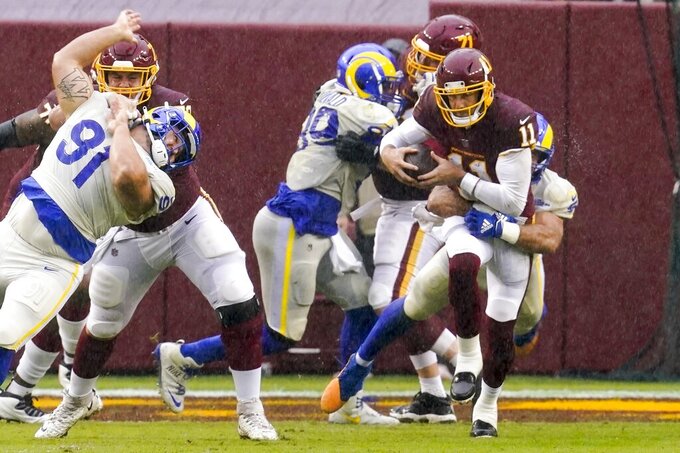 Joe Thiesmann didn't cringe, but he was curious to see how Alex Smith would react to getting hit.

After entering an NFL game for the first time since breaking his right leg in gruesome fashion 23 months ago, Smith didn't have to wait long. He absorbed two sacks from Aaron Donald, got up each time and finished the game that Washington lost 30-10 to the Los Angeles Rams on Sunday.

Smith completed his remarkable comeback 693 days after a broken tibia and fibula, 17 surgeries and a life-threatening infection put his career in jeopardy. Watching on television, Thiesmann — who broke his right leg in eerily similar fashion 33 years to the day of Smith's injury — couldn't help but be impressed.

“The first time he stepped up in the pocket and I saw him move, I thought, ‘OK. He’s back,'” Thiesmann told The Associated Press by phone. “I think the question has been answered. He’s been sacked. He’s scrambled around a little bit. And in doing so, he’s answered the questions.”

The big question now is whether Smith will remain Washington's starting quarterback next week at the New York Giants. All signs certainly point to that possibility after coach Ron Rivera benched Dwayne Haskins, elevated Kyle Allen to starter but kept Smith in against the Rams even when Allen was cleared to return from a left arm injury.

Smith started off like his old self, completing 5 of 6 passes on short dump-offs after relieving Allen late in the second quarter. He finished 9 of 17 for 37 yards in the rain behind a struggling offensive line and against a defense that clamped down.

Despite the rough numbers, Smith's return puts him squarely in the conversation for Comeback Player of the Year.

"Just to put the uniform on and make the active roster? He was a guy who just didn’t understand how not to compete," Thiesmann said. “The severity of the situation his leg wound up in, with the infections and the surgeries and everything, was so much different than mine. He went through so much more than I did.”

Smith spent a month in the hospital after the severe injury Nov. 18, 2018. He had a titanium rod inserted into his right leg and was only cleared to practice in August. He made Washington's roster as the third quarterback, but when Rivera demoted Haskins to third on the depth chart, the first-year coach added he was comfortable putting Smith on the field because doctors approved.