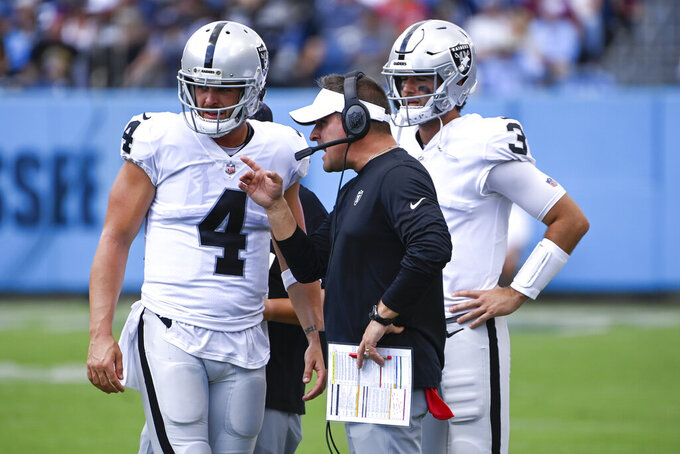 NASHVILLE, Tenn. (AP) — The Tennessee Titans finally have their first victory this season.

Better yet? They think they found the winning recipe for many more.

Ryan Tannehill threw for 264 yards and a touchdown and ran for another score and the Tennessee Titans never trailed Sunday, holding off the Las Vegas Raiders 24-22 for their first victory this season.

Derrick Henry also ran for 85 yards and a touchdown. Henry also added 58 yards more receiving as the Titans (1-2) avoided their worst start since 2009 when they lost the first six games.

“It’s hard to win in this league, and I'm happy that I was able to contribute,” Henry said. “It’s a great team win.”

“You only get what you fight for in this league,” Vrabel said. "I thought they fought for it today. And I’m happy for them.”

The Raiders (0-3) are off to their worst start since 2018. A week after blowing a 20-point lead in losing to Arizona in overtime, the Raiders had every chance to get back in this game in the second half as they blanked Tennessee after halftime.

Josh McDaniels, the third full-time Raiders coach to start 0-3, said his Raiders have been in close games with the first three losses by a combined 13 points with chances to win at the end.

“I’m looking for us to try to improve and play a full 60-minute game, where we actually start well, play well in all three phases, see what that looks like. I’m not sure that we’ve done that yet,” McDaniels said.

Two-time All-Pro safety Kevin Byard celebrated his 100th regular-season game by picking off a Derek Carr pass in the end zone with 9:22 left.

Kristian Fulton broke up a pass to Raiders receiver Mack Hollins in the end zone with 3:33 left.

Trailing 24-16, the Raiders converted a fourth-and-15 and a fourth-and-10. Carr then hit Hollins with a 9-y ard TD pass on fourth-and-goal with 1:14 left. But Carr’s 2-point conversion pass to tie the game was broken up by linebacker Dylan Cole that Byard nearly picked off as well.

Austin Hooper then recovered the onside kick for Tennessee, which knelt down for the win.

“Just the overall feeling of losing is what breaks my heart," Carr said. "I’ve seen what it takes to win at this level. ... I believe in what we’re doing, but we don’t have the results yet.”

Carr was 26 of 44 for 303 yards and two touchdowns. Hollins finished with eight catches for 158 yards, and five-time Pro Bowl wide receiver Davante Adams was held to five catches and 36 yards with a TD.

Vrabel said the Titans would get back to their bread and butter on offense. They made sure their two-time NFL rushing champ touched the ball six times on a 12-play drive to open the game. Henry ran four times for 16 yards, including 19 on back-to-back carries. He also had two catches for 26 yards.

The Titans also got the ball to some of their other top players. As a result, they scored touchdowns on each of their first three possessions with drives of at least 75 yards for just the third time since 2000 and led 24-10 at halftime.

It also was the first time the Raiders allowed three straight such TDs since a 44-7 loss to the New York Giants on Oct. 11, 2009.

The Raiders tried switching gears in the third quarter. But they had to settle for a second field goal by Daniel Carlson, this a 32-yarder after using up 8:03 of the third. Even after safety Duron Harmon picked off the pass and returned it 11 yards to the Titans 31, the Raiders wound up punting.

A holding call on right tackle Jermaine Eluemunor wiped out a 29-yard pass by Carr to Darren Waller. Adams couldn't get both feet down on a catch, then they were flagged for delay backing them up even more. Carr's pass to Brandon Bolden was stopped for a 2-yard loss.

The Titans running back had a busy day with 26 total touches with 20 carries and six passes thrown to him. He led the Titans with five receptions, one off his career high. After he talked to reporters, a team security official with a cart gave Henry a ride away from the locker room.

Titans linebacker Zach Cunningham, who was on the injury report with an injured knee, went straight to the locker room with an injured elbow in the third quarter. Titans cornerback Kristian Fulton went down with 1:22 left.