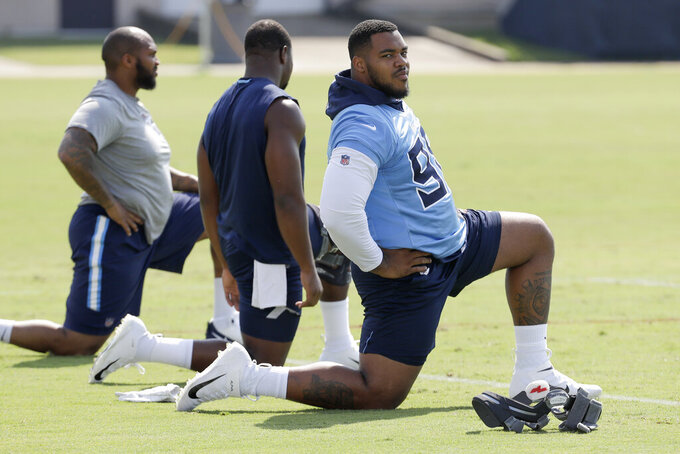 No need for the Titans' reigning sack leader to push too hard on his first day back.

The Titans announced before the 11th practice of camp a handful of roster moves, the biggest that Casey passed his physical after starting on the physically unable to perform list. Fellow defensive lineman DaQuan Jones said it was awesome to have Casey back.

A Pro Bowl lineman each of the past four seasons, Casey was placed on injured reserve after hurting a knee Dec. 22 in the fourth quarter of a 25-16 win over Washington. He led the Titans with seven sacks and a career-high 50 quarterback pressures last season in his first year of coordinator Dean Pees' defense. Casey also ranks eighth in franchise history with 46 career sacks.

A third-round pick out of Southern Cal in 2011, Casey has had six straight seasons with at least five sacks. He's had at least two sacks in nine games in his career.

"An athletic, disruptive presence, knowledgeable," Titans coach Mike Vrabel said of Casey. "He's instinctive, played a lot of different positions for us and just excited to get him back and start working with him."

After spending the entire offseason recovering, Casey said he tried not to think about his knee once practice started Saturday. Teammates told him he looked pretty smooth, though Casey said his legs felt a bit heavy as he starts working himself back into football shape without pushing too hard.

"That's always the smart case, especially this early on getting back out there you don't want to push it too hard where you can re-damage something or do something stupid," Casey said. "The whole mindset is to get back out there and move around as much as I can and let the drills and let the coaches ease me back in as much as they want."

Casey has been working his way back alongside the Titans' first-round pick, defensive lineman Jeffery Simmons. The 19th pick overall in April has been recovering after tearing his left ACL in a February workout. Casey said the benefit has been him being able to show the rookie techniques and give Simmons tips.

He credited Simmons with pushing him through his own rehabilitation and in the weight room. Casey also thinks Titans coaches need to tell Simmons to slow down a bit with the rookie needs to be reminded he's not yet at the recovery stage that the veteran is.

"I think when he gets out there, he's going to be ready to go full speed," Casey said.