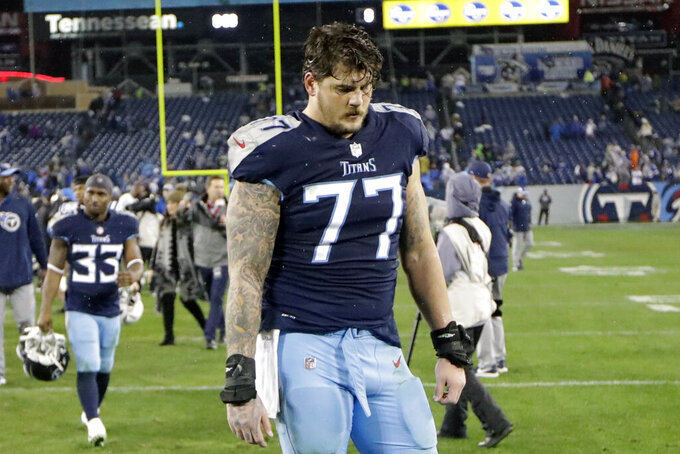 NASHVILLE, Tenn. (AP) — Taylor Lewan, Tennessee's three-time Pro Bowl left tackle, says the NFL has suspended him for the first four games of the season for violating the league's policy on performance enhancers.

Lewan announced his suspension Wednesday in an emotional video he posted to social media, saying he received the letter from the NFL a few weeks ago that he had tested positive for ostarine. He said he wanted to share the news himself, which comes a day before the Titans report for training camp.

"I've never taken anything that would cheat the game. I'm so sorry to the Tennessee Titans," Lewan said before pausing, taking a deep breath and wiping his eyes. "I'm sorry to the Titans, to the fans, that I won't be there for four games. I've never cheated myself, and I never want you guys to feel cheated. And I'm sorry. But I'm going to be better for this. I'm going to come back."

Lewan says he took a polygraph voluntarily and shared the results to his Instagram account showing he passed when saying no to whether he ever knowingly took ostarine or used any illegal drug to boost his performance. The left tackle, who's going into his sixth season, says he also had his supplements tested by a third party but knows he's responsible for what goes in his body.

He noted that Clemson defensive tackle Dexter Lawrence and two other reserves were suspended for one year, starting with the College Football Playoffs for failing an NCAA drug test for PEDs involving ostarine. Clemson cited health privacy laws in June for declining to reveal how the players came in contact with the substance.

The Titans made Lewan the highest-paid offensive lineman in the NFL with a new contract at the start of training camp a year ago. They just signed guard Rodger Saffold in free agency to anchor the left side of the offensive line to better protect quarterback Marcus Mariota, who's in the final season of his contract.

Tennessee does have right tackle Jack Conklin available for the start of training camp along with Dennis Kelly and Kevin Pamphile, who spent much of the offseason practicing at right guard, as other options at tackle. The Titans open the season Sept. 8 at Cleveland.