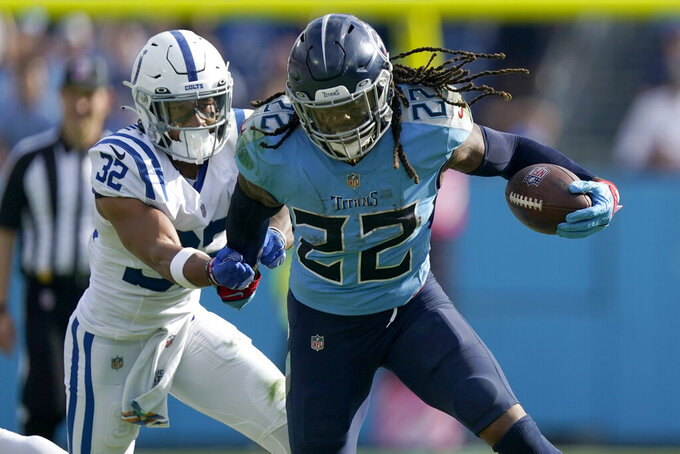 BETTING LINE: Titans by 2½, according to FanDuel Sportsbook.

TURNOVER DIFFERENTIAL: Titans plus-3; Texans plus-2.

TITANS PLAYER TO WATCH: Derrick Henry. The two-time NFL rushing champ has the third-best rushing average against a single division since the 1970 NFL-AFL merger among backs with at least 20 games. Henry is averaging 99 yards rushing per game against the AFC South, trailing only Barry Sanders who averaged 104.7 yards per game in the NFC Central. Henry has run for at least 100 yards in nine of his past 10 division games.

TEXANS PLAYER TO WATCH: RB Dameon Pierce. He not only leads all rookies with 504 yards rushing, that puts him fifth in the NFL. He had 117 yards from scrimmage last week, his fourth straight game topping at least 100 yards.

KEY MATCHUP: Henry again. The Titans running back has run for at least 100 yards in three straight games this season and is coming off his season high with 128 yards last week. The Texans are last in the NFL, allowing 164.7 yards rushing per game.

KEY INJURIES: Texans WR Nico Collins sat out of practice Wednesday and is likely to miss the game with a groin injury. Titans QB Ryan Tannehill needed a walking boot to leave the stadium after beating the Colts. He did not practice Wednesday, but has not missed a start since becoming the starter in mid-October 2019. Titans ILB Zach Cunningham, waived by Houston last December, is back practicing after missing three games with an injured elbow. OLB Bud Dupree, who just returned from an injured hip, now is dealing with an injured hamstring.

SERIES NOTES: These teams split last season with each winning on the road. The Titans are looking for their fourth straight win in Houston and their fifth straight win inside the AFC South. The Titans clinched a wild-card berth in the 2019 regular-season finale, their first AFC South title since 2008 in the 2020 regular-season finale and a 2,027-yard rushing season for Henry and the AFC's No. 1 seed with their win to cap the 2021 regular season. ... These teams are 10-10 at NRG Stadium. ... The Texans replaced the Titans in Houston in 2002 after Bud Adams moved his then-Oilers to Tennessee in 1997.

STATS AND STUFF: The Titans have won four straight. Another victory would mark a third straight season with at least a five-game winning streak. ... Tennessee's .857 winning percentage with a 12-2 record in the AFC South since 2020 to now is best in the NFL, and the Titans have a .692 winning percentage in the division since Mike Vrabel was hired as coach for the 2018 season. ... Titans QB Ryan Tannehill has gone three straight games without an interception. ... The Titans have used 20 different starters on defense. ... The Titans are allowing an NFL-stingiest 27.8% conversion on third downs. ... Titans rookie P Ryan Stonehouse leads the NFL with a 54.9-yard punting average. ... Texans QB Davis Mills completed a season-high 302 yards passing last week for his fifth game with at least 300 yards passing. Mills has had two TD passes in two of his past three games. Mills threw for 301 yards with three TDs and a 128.5 passer rating in the previous game between these teams. ... Texans RB Dare Ogunbowale had five catches for a career-high 54 yards receiving last week. ... Texans WR Brandin Cooks has had at least seven catches for at least 55 yards receiving in his past two home games. ... Texans TE Jordan Akins had a season-high 68 yards receiving last week to lead the team. ... Texans DE Rasheem Green had a season-high two tackles for loss and a sack last week. He has had at least a half sack in four of five games this season.

FANTASY TIP: Henry. He also has an NFL-record five games with at least 200 yards rushing and at least two TDs, with three of those coming in each of his past three games against the Texans.