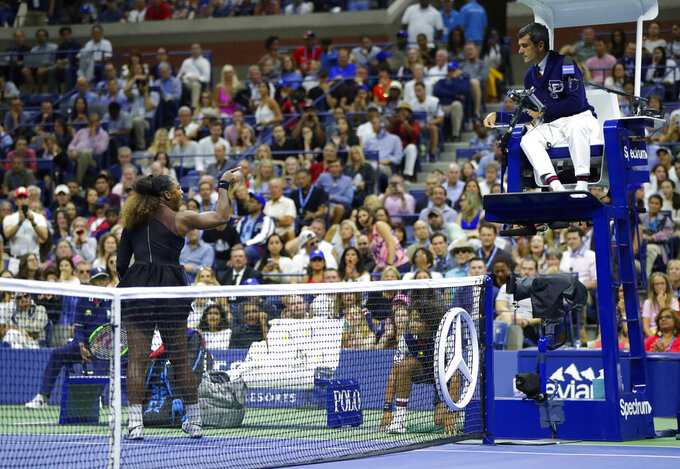 FILE - In this Sept. 8, 2018, file photo, Serena Williams argues with chair umpire Carlos Ramos during a match against Naomi Osaka, of Japan, in the women's final of the U.S. Open tennis tournament in New York. Blown calls, controversial calls and non-calls are nothing new to sports. Sometimes, the reaction of the wronged party can be as memorable as the call itself. (AP Photo/Julio Cortez, File)

MINNEAPOLIS (AP) — The toilet paper was already flying at Toomer's Corner, the spot where the biggest celebrations go down when Auburn's sports teams win big.

Then, the whistle blew.

A comeback win transformed into a devastating loss.

And within seconds, the pain and second-guessing of the final plays flowed from everywhere. From TV: "Man, I want to cry right now ," said Auburn alum Charles Barkley. From Twitter on a non-call: "Were they paid by Virginia? " From the headlines: "Foul Play ."

Lost somewhere amid all that agony at Auburn and euphoria in Virginia heading to the NCAA Tournament final was the fact that we've seen all this before.

No official is perfect.

No instant replay is going to fend off all mistakes.

Even when the call is the right one, sports aren't always fair.

And when they're being played on the biggest stages, those facts of life are placed out there on vivid, often heart-wrenching display.

"At that level, you'd hope it's not going to happen because of what's at stake, but it's going to happen," said John O'Suillivan, founder of the Changing The Game Project , which teaches about keeping perspective in youth sports. "It has always happened, and it always will."

Virginia earned a date with Texas Tech in Monday's national title game because of the foul and those three free throws, to say nothing of the whistles that weren't blown in the moments before.

In Virginia's 63-62 win over Auburn on Saturday, the discussion about whether Samir Doughty fouled Kyle Guy as Guy was shooting a 3-pointer with 0.6 seconds remaining turned out to be the simplest part of the debate.

More difficult to untangle: Should that foul have been called under those circumstances? Many see it simply, others point out that worse infractions have been ignored.

And what about the Ty Jerome, the Virginia guard who lost the ball, picked it up and then started dribbling again, on the play that came seconds earlier near midcourt? Should that have been whistled? And why didn't the refs call a foul when Bryce Brown grabbed Jerome's jersey as Jerome was trying to re-collect the ball just before he double-dribbled?

It all happened in the blink of an eye — much easier to detect, and break down, with the help of super slow-motion and a couple different angles that none of the three officials had the luxury of seeing either while it was happening, or directly after it occurred. It was a judgment (non) call, so it wasn't subject to being reviewed, the way many tough, late-game calls are under the rules in college hoops.

"I would challenge anyone complaining about that call, I'd say, 'Did you recognize that in real time?'" said Dean Blandino, the former vice president of officiating for the NFL. "It's just one of those unusual plays that happen. When I used to be in officials' meetings, we would always say, 'Something is going to come up that's never happened before, so you just have to anticipate that.'"

But how to react to something that's never happened before?

Less than three months ago, the Los Angeles Rams made the Super Bowl at the expense of the New Orleans Saints in the wake of an unthinkable non-call of an obvious pass-interference infraction late in that game.

The NFL got pilloried for the call. Lawsuits were filed. The commissioner, Roger Goodell, got destroyed during his annual Super Bowl press conference for failing to promise immediate change.

Only last week did the league's teams vote to make pass interference calls, and non-calls, reviewable .

"But you do that, and you're potentially creating a whole host of other issues," Blandino said.

Only time will tell what they are.

Serena Williams in tennis. Dustin Johnson in golf. The 1972 U.S. Olympic basketball team . The "Hand of God " in soccer. Fifth down for Colorado in college football.

Blown calls, controversial calls and calls that were "correct" according to the rulebook but questionable given the circumstances are nothing new to sports. Sometimes, the reaction of the wronged party can be as memorable as the call itself.

After Saturday's whistle, Auburn coach Bruce Pearl, apoplectic at first, defused the situation as best he could: "There are lots of calls during the game, and you're going to get some, and some you're not going to get," he said.

That's boilerplate material for good sportsmanship and teaching your players, and fans, how to handle the toughest of situations.

Similar emotions sometimes manifest themselves in other types of cruel or redeeming moments. On Sunday, Guy explained how his winning free throws followed a year rebuilding his confidence after Virginia's historic 16-over-1 loss last year. A few hours later, Notre Dame star Arike Ogunbowale lost a chance to repeat as hero in the women's NCAA final by missing a free throw she intended to make and then making a free throw she intended to miss.

In general, O'Sullivan warns it's not good to use the examples set in elite sports as lessons for how to behave at the youth or recreational level.

"Those are two different things," he said. "One is sport for entertainment, the other is sport for development."

Sometimes, especially in places where sports are so enmeshed with daily life, they seem hard to separate.

But even at Toomer's Corner in Auburn, the sun came up the next morning. America started counting down to Monday night's big game, and fans on every side could agree on one thing: Hopefully an official's call won't decide it.

"Regardless of the circumstances, we're all human," said Craig Littlepage, the former athletic director at Virginia. "We all have to realize that it's sports. There are going to be mistakes made along the way."