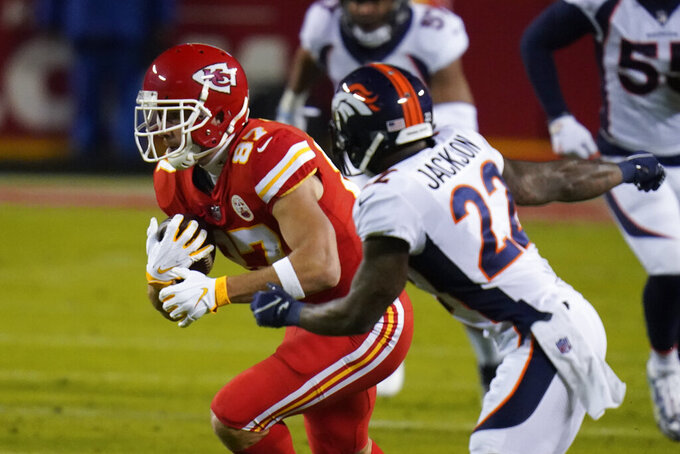 Looking at his own wouldn't give Kelce much time for anything else.

With a game-high eight catches for 136 yards and a touchdown in their 22-16 win over the Denver Broncos on Sunday night, the two-time All-Pro eclipsed 1,000 yards for the fifth consecutive season. He became the 26th player in NFL history with a streak that long, and the only tight end. Eight of those players are in the Pro Football Hall of Fame.

That's just the start: He has 1,100 yards receiving, the most for a tight end through 12 games; he had his 24th career 100-yard receiving game, the second most in franchise history; he now has 82 catches, joining Tony Gonzalez and Jason Witten as the only tight ends to eclipse 80 catches in a season at least five times.

“It's something cool to hang your hat on when your career is over, I assume. I'm just trying to win football games,” said Kelce, whose 45 career touchdown catches are tied with teammate Tyreek Hill for fifth in Chiefs history.

“All that stuff, this game — I'm not the same without 10 other guys on that football field playing their tails off and moving the ball down the field,” Kelce continued. “I'm a firm believer that individual accolades are a little overrated in this game.”

Maybe they are sometimes. But all those big achievements also are a big reason why the Chiefs are 11-1 for only the second time in franchise history, locked up a spot in the playoffs, and are zeroing in on their fifth straight AFC West championship.

Mahomes knows something about gaudy numbers, too. He threw for 318 yards and a score against the Broncos, breaking a tie with Trent Green for the franchise record with his 25th game of at least 300 yards. It was his eighth this season alone.

Before the second-half touchdown pass to Kelce, the Chiefs had been 0 for 4 scoring touchdowns in the red zone, and their streak of seven consecutive trips without a touchdown dating to the previous week against Tampa Bay was the longest in the league this season. Penalties, lack of execution, and the inability to run between the tackles have been the culprits.

“I didn't do a very good job in the red zone giving the guys opportunities to get in,” Chiefs coach Andy Reid said. “I’ll go back and work on that part and make sure I put these guys in position to make plays.”

Sammy Watkins is still getting back to speed after a lengthy hamstring injury, but Demarcus Robinson has filled in nicely in the passing game. He caught both of his targets for 39 yards against Denver, and his crisp route-running and sure hands are a big reason why he's supplanted Mecole Hardman in the pecking order.

The Chiefs' run defense gave up 131 yards to Melvin Gordon and 179 yards rushing to the Broncos, which allowed them to control the tempo for most of the game. It was the eighth time in 12 games a team has run for at least 100 yards on KC.

Defensive back Antonio Hamilton and linebacker Anthony Hitchens were shaken up but both finished the game.