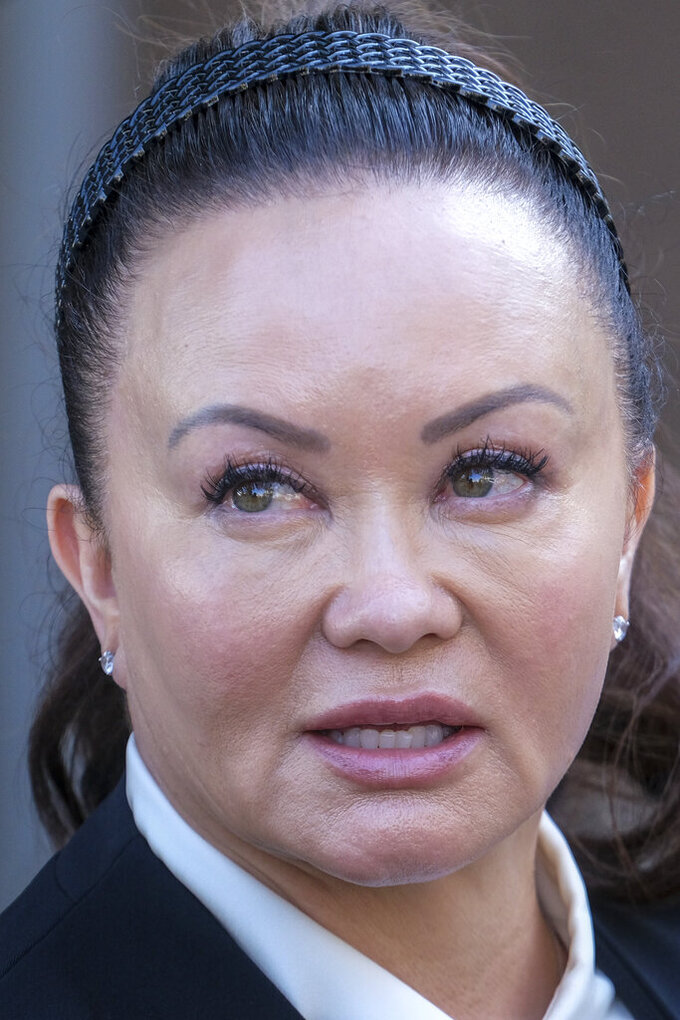 Alana Gee, the widow of a former University of Southern California football player suing the NCAA for failing to protect her husband from repetitive head trauma, leaves the Stanley Mosk civil courthouse of Los Angeles Superior Court on Friday, Oct. 21, 2022. Matthew Gee died in 2018 from permanent brain damage caused by countless blows to the head he took while playing linebacker for the 1990 Rose Bowl winning team, according to the wrongful death suit filed by Alana Gee. (AP Photo/Ringo H.W. Chiu) 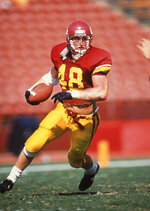 LOS ANGELES (AP) — A Los Angeles jury heard opening statements Friday in the case of a widow of a former University of Southern California football player suing the NCAA for failing to protect her husband from repetitive head trauma.

Matthew Gee died at age 49 in 2018 from permanent brain damage caused by countless blows to the head he took while playing linebacker for the 1990 Rose Bowl-winning team, according to the wrongful death suit filed by Alana Gee.

The jury of eight women and six men listened along with Gee and two of her three children to lengthy opening statements from both sides in Los Angeles Superior Court.

At times, Gee and her daughter, Melia, dabbed their eyes with tissue as attorneys recounted the life of her husband and his struggles with alcohol and drug addiction.

One of Gee's attorneys, Justin Shrader, said she is seeking $1.8 million in damages based on her husband's life expectancy. He said Gee is also seeking damages for wrongful death, loss of her husband's companionship and a survival claim for Gee.

“Alana wants to be one of the last widows to find out that college football can cause CTE,” Shrader said, referring to chronic traumatic encephalopathy, a degenerative brain disease.

Of the hundreds of wrongful death and personal injury lawsuits brought by college football players against the NCAA in the past decade, Gee’s is only the second to go to trial with allegations that hits to the head led to CTE. It could be the first to reach a jury.

“This case is a big deal,” said attorney Will Stute, who is representing the NCAA.

The NCAA, the governing body of college athletics in the U.S., said it wasn’t responsible for Gee’s husband's death, which it blamed on heavy drinking, drugs and other health problems.

“We believe the evidence is going to show it was impossible for Matthew Gee to assume the risk of degenerative brain disease because the NCAA still believes it doesn’t exist,” said Bill Horton, another of Gee's attorneys.

Stute later countered, saying, "I will not tell you that the NCAA denies CTE is a real medical issue, but there is still no consensus in the medical community on what causes CTE. The NCAA has always and will continue to follow the science.”

The defense has sought to exclude any testimony about Gee’s teammates and the NCAA said there was no medical evidence he suffered from concussions at USC.

“There is nothing the NCAA could have done to prevent Gee’s death,” Stute said.

Horton disagreed, telling the jury, “We believe he suffered a number of concussions at USC and was never warned what might happen later in life.”

The issue of concussions in sports, and football in particular, has been front and center in recent years as research has discovered more about long-term effects of repeated head trauma in problems ranging from headaches to depression and, sometimes, early onset Parkinson’s or Alzheimer’s disease.

A 2018 trial in Texas led to a swift settlement after several days of testimony by witnesses for the widow of Greg Ploetz, who played defense for Texas in the late 1960s.

In 2016, the NCAA agreed to settle a class-action concussion lawsuit, paying $70 million to monitor former college athlete's medical conditions, $5 million toward medical research and payments of up to $5,000 toward individual players claiming injuries.

Stute stressed to the jury that it focus on the years from 1988-92, when Gee played for the Trojans.

“Evidence will show CTE was not discovered in a football player until 2005,” he said. “But somehow the NCAA was supposed to be warning people about a disease that hadn’t been identified yet.”

The NFL has been hit with similar concussion suits and eventually agreed to a settlement covering 20,000 retired players providing up to $4 million for a death involving CTE, which is found in athletes and military veterans who suffered repetitive brain injuries. It's expected to exceed $1.4 billion in payouts over 65 years for six qualifying conditions.

After years of denials, the NFL acknowledged in 2016 that research done at Boston University’s Chronic Traumatic Encephalopathy Center showed a link between football and CTE, which is associated with memory loss, depression and progressive dementia. It can only be diagnosed after death.

The center has found CTE in the brains of 110 of 111 deceased former NFL players and 48 of 53 former college players, according to a study in the Journal of the American Medical Association.

Hall of Famers diagnosed after death include Ken Stabler and Mike Webster and Junior Seau, a teammate of Gee's at USC.

The NCAA, which required schools in 2010 to have a concussion protocol, said long-term effects of head injuries weren’t well understood at the time Gee played.

Alana Gee donated her late husband's brain to Boston University's CTE Center, which confirmed he suffered from Grade 2 CTE, a lower level of the disease.

The preliminary cause of Gee's death was listed as the combined toxic effects of alcohol and cocaine with other significant conditions of cardiovascular disease, cirrhosis and obesity.

“We believe the substance abuse issues were because of his CTE, that the brain was affected first before other things happened,” Horton said.

Stute said the defense believes the key question is what killed Gee. He went on to display Gee's medical records, which noted his use of marijuana, LSD and cocaine, as well as alcohol.

“He hid his drinking and drug use from his family and doctors,” Stute said. “He kept drinking after being diagnosed with hypertension and liver disease. It's not to blame Mr. Gee. It's simply the facts of the matter.”