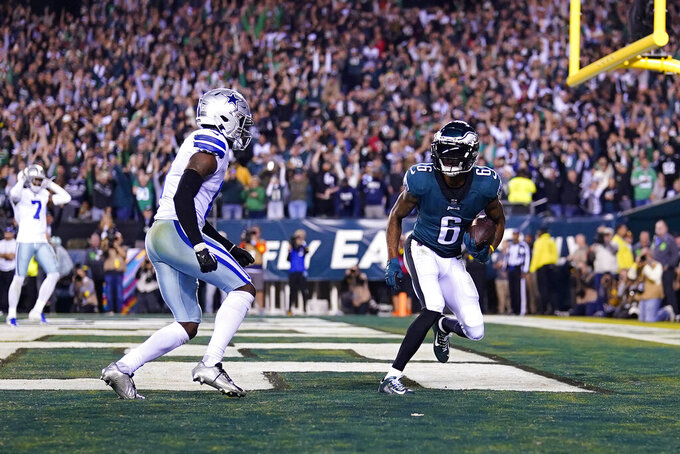 Philadelphia Eagles' DeVonta Smith scores a touchdown during the second half of an NFL football game against the Dallas Cowboys on Sunday, Oct. 16, 2022, in Philadelphia. (AP Photo/Matt Slocum)

PHILADELPHIA (AP) — With one big trade for a big-time pass rusher, the Philadelphia Eagles crystalized a mission statement that already seemed clear to anyone who watched Jalen Hurts and crew get off to an undefeated start — this team is all-in on the Super Bowl.

The preseason hope the Eagles could win the NFC East or even win a playoff game or two has morphed into a full-blown expectation that they should win the championship. And why not? Expectations are sky high in Philly these days and the Phillies' run to the World Series has already stirred the fan base into dreaming about two sports champions.

Consider, only the Buffalo Bills have better odds than the Eagles to win the Super Bowl, per FanDuel Sportsbook.

The Eagles are the lone undefeated team in the NFL at 6-0 — a start they've enjoyed before only in 1981 and 2004 — as they return from an off week to play the Pittsburgh Steelers (2-5) at Lincoln Financial Field. The Steelers have lost five of six and have experienced growing pains with rookie QB Kenny Pickett.

The Eagles have won nine consecutive games over Pittsburgh in Philadelphia. The Steelers’ previous win in Philly was a 20-14 victory on Oct. 24, 1965.

The Eagles didn't go far during their time off — Hurts rang the ceremonial bell to start a 76ers game and Kelce palled around with the Phillie Phanati c during playoff games. And the front office sure didn't rest on the Birds' undefeated start.

The 32-year-old Quinn is off to a slow start with just one sack and three quarterback hits after opting not to participate in offseason workouts. But he broke Hall of Famer Richard Dent’s franchise record with 18 1/2 sacks last year in a resurgent season.

“I know this year the numbers might not be there, but he's a very tough matchup for a lot of tackles in the NFL,” Kelce said. “I think we have a culture around here that's very welcoming of players.”

The Eagles hope the break hasn't slowed Hurts' roll as he tries to keep the team undefeated. Hurts has won nine straight regular-season games, the longest active streak in the NFL. Hurts has passed for 1,514 yards and six TDs and run for 293 yards and six TDs while posting a 98.4 QB rating.

The Eagles used the off week as a time of reflection, as well as a time to study for the games ahead.

“We sent Jalen a packet of what we did, a book of what we did, and gave him summary notes of it, as well, so he could study it, and we were talking through it as we would with all the other coaches,” Eagles coach Nick Sirianni said.

The 6-0 start is nice, but Sirianni — who has cheered on the Phillies from games across the street at Citizens Bank Park and has used their success as motivational tool — reminded the team it's not the start, it's the finish that counts.

And this year's team knows where it wants to end up.

The Steelers are off to their worst start since 2013 thanks in large part to an offense that has been sputtering no matter who's behind center. Pittsburgh is near the bottom of the league in every major offensive category, including scoring (31st) and total yards (30th).

One of the biggest issues — among many — is the lack of big plays. The Steelers are one of three teams without a single run of 20 yards or more. New York Giants quarterback Daniel Jones, for comparison, has two of his own. Pittsburgh also has just one pass completion of 40 yards or more.

That puts a lot of pressure on Pickett to sustain long drives without mistakes, something that’s a lot to ask for an offense with no skill position starter older than 26.

“There (are) times where we have to take chances and give our guys the chance to make plays down the field,” Pickett said.

Pittsburgh received a bit of good news this week when reigning Defensive Player of the Year T.J. Watt returned to practice. The bad news is he won’t be back until after next week’s bye at the earliest, forcing a group that has generated little pass rush without him to find a way to keep Hurts in check.

That figures to be a significant challenge for a group that collected seven sacks in Week 1 with Watt in the lineup and has managed all of five during his six-game absence.

Tomlin can live without the sacks if his defense finds a way to make opposing quarterbacks uncomfortable. That hasn’t happened much of late.

“When you’re rushing good, you have consistent pressure, and you dictate to them as opposed to the sack being a statistic that reflects pressure,” Tomlin said.