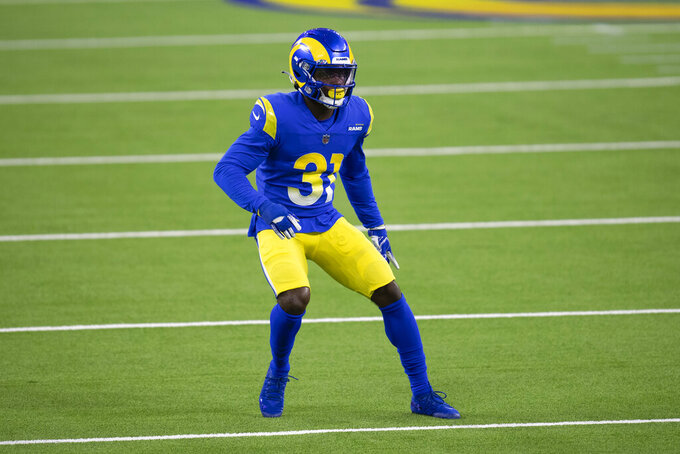 FILE - In this Oct. 26, 2020, file photo, Los Angeles Rams cornerback Darious Williams watches a play develop during the team's NFL football game against the Chicago Bears in Inglewood, Calif. The Rams found untapped talent in an undrafted third-year pro who bounced around college football and then got waived by Baltimore as a rookie two years ago. He landed with the Rams and relentlessly played his way into a career. (AP Photo/Kyusung Gong, File)

THOUSAND OAKS, Calif. (AP) — Although Darious Williams' road to NFL success was unusually long and quite winding, the confident cornerback says he had no doubt where it would end.

“I always knew it,” Williams said Wednesday. “I’ve never really paid attention to outside noise. I’ve always just kind of been into myself, and from the time that I had a chance to get in the league, I knew I was going to be special. It just took the right team to see it.”

The Los Angeles Rams are also grateful they saw it.

They've found underappreciated talent in an undrafted third-year pro who bounced around college football and then got waived by Baltimore as a rookie. Ever since he landed with the Rams two years ago, Williams has relentlessly played his way into a career.

Williams has been a remarkably strong addition this season to the Rams' (5-3) defense, which ranks among the NFL's best across the board at the halfway point of their season. He is Los Angeles' starting cornerback opposite Jalen Ramsey, more than holding his own when opponents come after him while avoiding the $105 million superstar on the other side of the field.

“When he got his opportunity, he showed that he had the right stuff,” said new Rams defensive coordinator Brandon Staley, who swiftly decided the unheralded Williams would be a key part of his scheme. “He’s definitely got the cover skills and the makeup to be an outstanding corner in this league."

Williams has stood out on the Rams' defense all season while protecting the boundary opposite Ramsey. He leads Los Angeles with seven passes defensed and two interceptions, regularly winning his competitions with elite receivers despite his 5-foot-9 frame.

Williams describes his attitude by saying he wants to be a “red dot” on an opponent, as in the laser sight on a sniper rifle. He got the term from John Fassel, the Rams' former special teams coordinator.

“That’s all seriousness,” Williams said. “I want to be someone like Jalen on the field, so they have to pick and choose who they want to throw to.”

Staley quickly warmed to Williams' skills while watching film after he got the job earlier this year, and that confidence has only grown. Williams' twisty career path is a positive in Staley's mind.

“Where he deserves all the credit in the world is the resilience, the toughness that he’s displayed,” Staley said. “It hasn’t happened for him right away in this league. It took a lot of time, and sometimes in the NFL, what can be overshadowed is sometimes it doesn’t happen all at once for people. Sometimes it does for a rookie. Sometimes it’s their second year. For Darious, it has taken a little time, but he’s worked so hard at his game. He’s shown what he’s made of, and I’m excited to see how far he can take it as a player.”

Williams was thought to be better at basketball than football while growing up in Jacksonville, Florida. He played one football season at Division III Marietta College in Ohio before heading home, and he tried to walk on at UAB in 2013 — only to be told the school didn't have room for him.

He made the team in 2014 and even earned a scholarship midway through the season, but UAB abruptly dropped football after the season. Williams worked and went to junior college, even turning down other scholarship possibilities, until UAB's football program returned to the field in 2017. Williams then headed to the NFL as a 24-year-old rookie.

Nobody drafted him — not even the Rams, who had scouted him and were high on his potential. Baltimore's powerful defense didn't have a job for Williams, but Los Angeles scooped him up.

Williams mostly played special teams in his first two NFL seasons, but he stepped up late last season for the LA defense. He recovered a fumble for a touchdown against Atlanta in his first real game on defense, and he played well in three straight late starts, picking off passes by Jimmy Garoppolo and Kyler Murray.

He's been even better this season while keeping that knack for big plays. Both of Williams' interceptions in 2020 were game-changers: A diving end-zone interception in the third quarter of Los Angeles' victory in Philadelphia while the Eagles were driving for the lead, followed by a superb game-clinching pick against the New York Giants two weeks later.

“I think we've come a long way,” Williams said. “With the pandemic and everything, we had a new coordinator coming in and obviously we weren’t around each other that much. The first couple of snaps we played, I just remember everything was brand-new, and it was just like, ‘Dang.’ It’s crazy how everything all worked out.”

NOTES: WR Cooper Kupp was limited in practice due to an oblique muscle injury. He is also nursing a wrist injury, but he's expected to play Sunday. ... RB Darrell Henderson also was limited in practice Wednesday with the thigh injury he incurred 10 days earlier in Miami. ... LG David Edwards missed practice with an abdominal injury. The 6-foot-6 second-year pro has started the Rams' last six games since Joseph Noteboom injured his calf. ... Noteboom will be added back to the Rams' 53-man roster this week, coach Sean McVay said, but Edwards will keep the starting job if he's healthy because he has impressed the Rams' coaches.