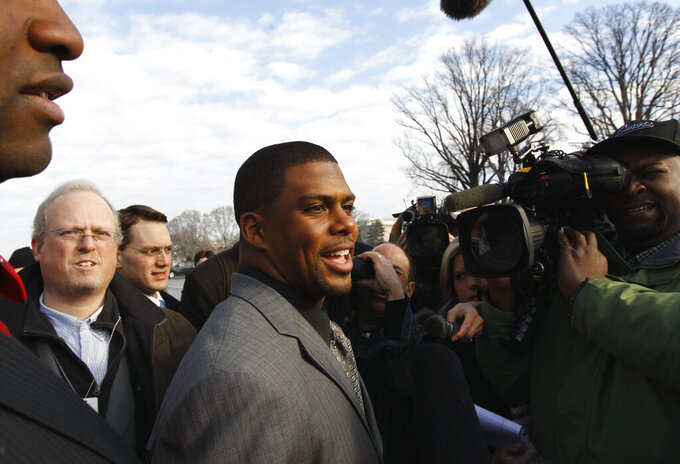 FILE - In this Jan. 19, 2011, file photo, Arizona Cardinals running back Jason Wright, center, talks to the media on Capitol Hill in Washington. The Washington Football Team has hired Jason Wright as team president. He’s the first Black person to hold this job in NFL history and at 38 becomes the youngest team president in the league. (AP Photo/Alex Brandon, File) 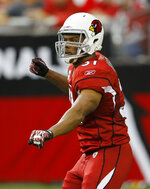 The Washington Football Team on Monday hired Jason Wright as team president, making him the first Black person to hold that position in NFL history.

At 38, he becomes the NFL’s youngest team president and will run the organization’s business operations with coach Ron Rivera maintaining control over football decisions.

Wright, a running back for seven years with Atlanta, Cleveland and Arizona, was a captain for the Cardinals and their NFLPA representative during labor negotiations in 2010-11.

“If I could custom design a leader for this important time in our history, it would be Jason,” owner Dan Snyder said. “His experience as a former player, coupled with his business acumen, gives him a perspective that is unrivaled in the league.”

The hiring is another significant change for Snyder, who has in the past nine months fired president and longtime confidant Bruce Allen after another losing season, hired Rivera, revamped the front office and medical staffs, bowed to pressure from sponsors to drop the name “Redskins” and been forced to confront allegations of sexual harassment by members of the organization from former employees.

As part of the national debate over racism following George Floyd's death in police custody in Minnesota, Rivera also launched internal initiatives aimed at educating players and staff and allowing minorities' voices to be heard. Wright seems to fit into that, as well.

“Jason has a proven track record in helping businesses transform culturally, operationally and financially,” Snyder said. “He is a proactive and assertive advocate for inclusion of all people and will set new standards for our organization, and for the league.”

The club with a storied history dating to its Boston roots in the 1930s and three long-ago Super Bowl titles is in a phase of transformation. It will be called the “Washington Football Team” for at least the 2020 season, with Terry Bateman spearheading the process to determine a new full-time name. Snyder is also seeking a new stadium to be in place when the lease at FedEx Field expires in 2027.

Wright is the fourth former player to become a team president and does so after several years in business. He earned an M.B.A. from the University of Chicago’s business school and joins the organization after working at a strategy and management consulting firm in Washington, D.C.

He called this an “ideal opportunity and said, “I have always enjoyed building exciting new things and taking on the hard, seemingly intractable challenges that others may not want to tackle.”

Wright, like Rivera, will report directly to Snyder while overseeing Washington's operations, finance, sales and marketing departments. Rivera, who was a defensive coordinator in Chicago and San Diego at the time, said he remembers Wright as a player and has grown to realize the two share many of the same values that should help them work together.

“It is no surprise to me that he went on to achieve the caliber of success that Jason has in his time in the business world,” Rivera said. “Because he knows the NFL firsthand and how fast it moves, I am excited to have him on board to head up the front office and operations.”