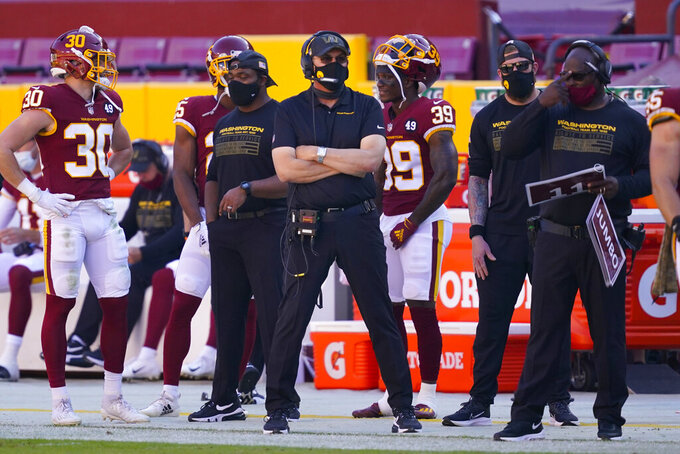 Washington Football Team head coach Ron Rivera, center, crossing his arms as he waits for game action to resume during the first half of an NFL football game against the New York Giants, Sunday, Nov. 8, 2020, in Landover, Md. (AP Photo/Al Drago)

Washington will start its third quarterback in nine games this season, and that’s only the start of the problems.

Inconsistencies at that position and others contributed to a 2-6 record at the midway point. Yet Washington is still in the mix because the NFC East leader has three victories, so the team is stuck in the middle of trying to contend and building for the future.

“We’re still in it,” coach Ron Rivera said. “Keep your fingers crossed. You just never know. But at some point, you have to win football games. That’s the truth of the matter.”

Rivera considered Kyle Allen the quarterback best positioned to win games for Washington. Now that he's out with a left ankle injury, it's 36-year-old Alex Smith, not 2019 first-round pick Dwayne Haskins, who was considered the future of the franchise before Rivera was hired.

Haskins started the first four games this season, leading Washington to a comeback victory in Week 1 before losing three in a row and Rivera's confidence. It's now up to Smith starting with a game at the Detroit Lions to keep this team in a very sad race for first place in a bad division.

“I have continued to progress and continue to get better, and I am thankful for that,” said Smith, who has made two relief appearances this season but will on Sunday make his first start since breaking his right leg in November 2018. “Kind of going full steam ahead. I’m not thinking about any of that other stuff going on with this opportunity. I am so thankful for it. I am going to make the most of it.”

The running game was going, until a 23-20 loss to the New York Giants was the first time in franchise history Washington finished with fewer than 10 carries. It's still a success story after cutting Adrian Peterson and turning to rookie Antonio Gibson as the top option in a running back by committee approach.

"We weren’t as good as we’d like to be running the football" against the Giants," Rivera said. "It doesn’t allow our play-action to be as effective as we would like it to be.”

Running it up against Dallas two weeks earlier and Gibson's potential after time as a college receiver are reasons for optimism the ground game can get back on track.

So, about that defense that was ranked fourth in the NFL through seven weeks. It allowed the Giants to rush for 109 yards in the first half alone, let Daniel Jones put up his longest passing play of the season, and didn't force a turnover against a team that hasn't beaten anyone but Washington this season.

Coordinator Jack Del Rio's unit has shown flashes of brilliance, or perhaps it just took advantage of anemic offenses. Either way, a lot needs to get fixed on the defensive side.

“We just have to get off the field,” linebacker Jon Bostic said. “We have to make our plays when we are there.”

For all the attention on No. 2 pick Chase Young, fellow pass rusher and 2019 first-rounder Montez Sweat is growing into form. When Young gets double-teamed, he said, “I feel like it can open the other end,” which is often Sweat, who's tied for 14th in the NFL with five sacks.

Young will get there, too, after putting up 3 1/2 in the first half. But his mom isn't all that satisfied.

“She said I’m not leading the league in sacks, so she gave me a C+,” Young said. “I’m definitely going to get them.”

Haskins might soon get a chance to start again, but Rivera demoting the Ohio State product to third string so Smith can back up is an indictment of where he is right now. Haskins has completed 59.6% of passes with 11 touchdowns and 10 interceptions in 13 pro games (11 starts) and is now a developmental prospect.

“He’s got the skill set,” Rivera said. "The arm is legit. Now, let’s see him put it all together. That’s what I’m hoping to get out of Dwayne for the next few weeks and as we go forward for the rest of the season.”

With S Landon Collins out for the rest of the season, there's no safety valve for Washington, which signed Jeremy Reaves off the practice squad rather than giving Eric Reid a full-time job and has already paid the price. The offensive line is also a mess, though the absence of injured left tackle Geron Christian isn't the only reason.

2 — Teams with a winning record left on Washington's schedule the rest of the way, which gives Rivera hope his team can snag the NFC East title.

Knock the rust off Smith, who threw for 325 yards and a touchdown but had three costly interceptions against the Giants. This is Smith's team for now, and the right offensive plan around him could be worth a few more wins — and that might be enough.