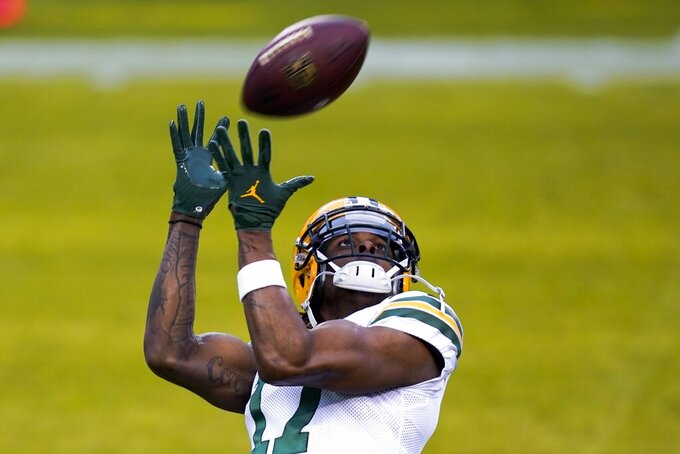 The Week 17 scoring bonanza provided the perfect finish to a record-setting season on offense.

Teams combined for 100 touchdowns in the final week of the season for the second-most in NFL history in a single week behind only the 104 scored in Week 14 of the 2013 season.

There were several players who had memorable seasons of their own to contribute to the high-scoring campaign led by Green Bay’s dynamic duo of Aaron Rodgers and Davante Adams.

A couple of young quarterbacks also had memorable years with Buffalo’s Josh Allen throwing for 4,544 yards and 37 TDs, to go along with eight touchdown runs. He became the first player with at least 4,500 yards passing, 35 TD passes and five TD runs in a single season.

Justin Herbert of the Chargers set a rookie record with 31 TD passes.

Minnesota’s Justin Jefferson had 1,400 yards receiving, the most by a rookie in the Super Bowl era.

Tennessee’s Derrick Henry led the league 2,027 yards rushing, become the eighth player to top 2,000. He also became the first player since LaDainian Tomlinson to lead the league in rushing in back-to-back seasons.

The Ravens became the sixth team since the merger to lead the NFL in point differential in back-to-back seasons, finishing this season at plus-165, 20 points ahead of the Saints.

The last team to do it was the Patriots, who led outright on the way to the Super Bowl title in 2016 and were tied with Philadelphia for first the following season when the Eagles beat New England for the title.

On the other end of the spectrum was Cleveland, which became the ninth team in the Super Bowl era to win at least 10 games while getting outscored (minus-11 points). The Browns joined the 2012 Colts (minus-30) as the only teams to win 11 games in a season when they were outscored.

The two teams with New York in their name once again finished near the bottom of the NFL. The Jets had the second-worst mark at 2-14 and the Giants were only moderately better at 6-10. It’s been a recurring problem for the two teams that play in the shadow of the Big Apple as the Giants haven’t been to the playoffs since 2016 and the Jets have the longest active drought since 2010.

Wherever Brandin Cooks goes, 1,000-yard receiving seasons seem to follow. Cooks had 81 catches for 1,150 yards in his first season in Houston, giving him at least 1,000 in five of the past six seasons.

Those productive years have come in four cities as Cooks topped the 1,000-yard mark in 2015-16 with New Orleans, 2017 in New England, 2018 with the Los Angeles Rams and this season with the Texans.

The only other player in the Super Bowl era to record 1,000-yard receiving seasons with four franchises is Brandon Marshall, who did it with Denver, Miami, Chicago and the Jets.

In a bit of a statistical oddity, the Vikings gained the exact same number of yards this season as they allowed: 6,292. As hard as that seems, its not unprecedented. Seattle did the same in 2018 with 5,653 yards and Kansas City in 1992 with 4,324.