On weekend of blowouts, Broncos bow out 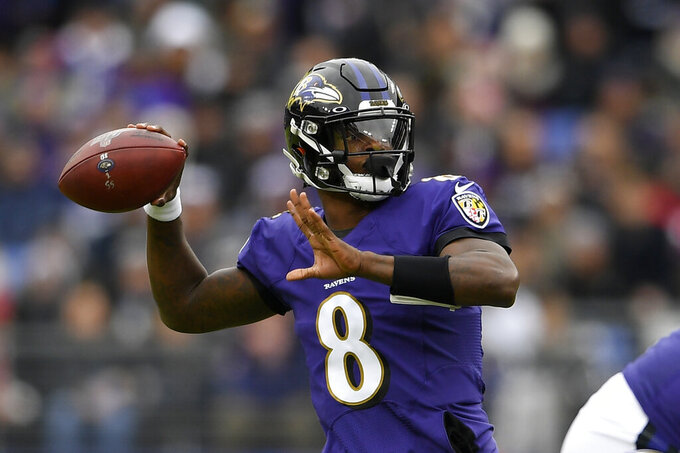 On a day of blowouts, the Denver Broncos blew it.

Wipeouts ruled the weekend, led by the Ravens' 41-7 smoking of the Texans in which Lamar Jackson completely outshined Deshaun Watson, turning the much-hyped showdown between the two double-threat QBs into a one-sided affair.

Jackson has now beaten Tom Brady, Russell Wilson and Watson in the last month and the Ravens are 8-2, one game behind New England in the AFC.

"Lamar Jackson is the MVP," Broncos cornerback Chris Harris Jr. insisted last week. "I go by head-to-head and Lamar beat Russell Wilson — and that was in Seattle, too."

That was on Oct. 20, when the Ravens won 30-16 in Week 7, when a season-high 10 of 14 games were decided by double digits. The next highest number of blowouts came in this Week 11 slate with nine games decided by 10 or more points.

The Broncos (3-7) were on their way to joining the steamroller salute when they took a 20-0 lead into the locker room at Minneapolis, where they held the power Vikings to just 14 yards rushing and 33 passing in the first half.

Not only did the Broncos become the only one of 100 teams to lose after taking a lead of at last 20 points at the half over the last five seasons, but they were outscored 20-0 in the fourth quarter and lost 27-23 despite a nearly 15-minute advantage in time of possession.

They kept that streak alive with three misfires form Brandon Allen — and some clock mismanagement — from inside the Vikings' 5-yard line in the final seconds Sunday, when grabbed jerseys and twisted facemasks didn't draw flags. On the 19th play of the fruitless drive, Allen's last pass was too hard and blasted off rookie Noah Fant's facemask before he could get his hands up as time expired.

The Broncos converted three fourth downs on the drive.

"The only problem for Denver after these fourth-down conversions, there was some bad clock management," NBC analyst Tony Dungy said. "They wasted a lot of time and had to rush at the end."

After Allen's scramble to the 4 with 27 seconds, the Broncos milled around until Minnesota called timeout with 10 seconds left.

Joining the offense and coaching in the blame was both Denver’s defense and special teams.

After limiting the Vikings to six punts and two fumbles in the first half, the Broncos allowed TDs on all four of Minnesota's drives after halftime as they had no answer for the no-huddle.

"I am just extremely mad at myself," McManus said. "All I know is I kicked the ground and it was not even close."

Denver also got greedy at the end of the first half when the Broncos recovered a fumbled kickoff at the Minnesota 17 with a minute left in the half and promptly gave the ball back to the reeling Vikings. Allen's misfire to Fant on the next play was intercepted by Andrew Sendejo, preventing the Broncos from taking a four-score lead and providing an ominous end to Denver's momentum.

"Bad throw by me," Allen said after his first NFL road start. "Really just trying to force it, wanted to get a big play. Probably should have checked down that one."

Points have been precious for the Broncos for more than a year — they haven't scored more than 24 points in their last 19 games, the longest current streak in the NFL.

The Vikings-Broncos game ended up being the closest on a weekend in which a half dozen games were decided by 17 or more points, following the Cleveland Browns' 21-7 win over Pittsburgh on Thursday night.

The league entered Week 11 with 77 games decided by seven points or fewer, which marked the second-most in league history through 10 weeks.

Thirty-seven times a team has made a fourth-quarter comeback, and Denver has surrendered four of those, including last-minute field goals by the Bears, Jaguars and Colts.

“This one hurts the most,” safety Justin Simmons said.