Welcome back: Fuller set to make his awaited Dolphins' debut 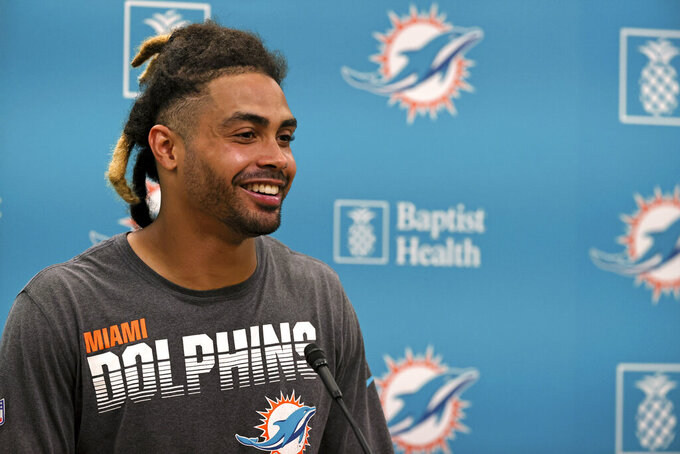 MIAMI GARDENS, Fla. (AP) — Will Fuller is looking forward to the calm of playing again.

Watching football games and not playing, it turns out, makes the Miami Dolphins wide receiver more than a bit jittery. And now that his six-game suspension for performance-enhancers that occurred last season is over, the speedy Fuller can finally get back on the field and make what will be his Dolphins’ debut Sunday against the Buffalo Bills.

“I’m always more nervous when I don’t play,” Fuller said. “I don’t have any nerves when I play football. I don’t remember the last time I got nervous playing a game.”

That’s good news for the Dolphins, who will add Fuller to a wide receiver group that’s already fairly deep with the likes of DeVante Parker, Jaylen Waddle, Jakeem Grant and Albert Wilson to serve as quarterback Tua Tagovailoa’s primary targets.

Tagovailoa worked with Fuller on their own during the offseason after the former Houston wideout signed a one-year, $10 million deal with Miami.

They’re still working on timing, with Tagovailoa sometimes calling Fuller over for some throws during the special teams portion of practice.

“I think it’s fun and it’s good to have Will back,” Tagovailoa said. “We can see in the game plan what things he can do to help us win this game.”

Last season was Fuller’s fifth in the NFL, and his best in terms of numbers. He finished with career-bests in receptions (53), yards (879), yards per catch (16.6), touchdowns (eight) and average yards after a catch (5.5). His last game was Houston’s win over Detroit on Thanksgiving — six catches, 171 yards, two scores.

The news about the suspension came a few days later. Fuller, who missed a bit of time in camp with an undisclosed injury but was not on the Dolphins’ injury report Wednesday, said the positive PED test was because he was taking a prescription medication that he believed was allowed under NFL rules.

“Will has been a high performer in his career. We’re excited to get him back,” Dolphins co-offensive coordinator George Godsey said. “For Will, I know he’s excited. He’s been itching at the bit. He had a little bit of a setback with an injury, but now he’s back out there, with the suspension too. It’ll be good to see him out there in practice and fitting him in.”

The status of DT Raekwon Davis, who was placed on injured reserve Tuesday and therefore ruled out for at least three games, remains a bit murky. coach Brian Flores would not say if Davis will need surgery, or even if he’s expected back this season. “If Raekwon wants to talk about that, he can. I’m not going to,” Flores said.

TE Adam Shaheen was activated off the COVID-19 reserve list. Shaheen, who previously revealed that he is unvaccinated and that he did not plan on changing that, missed all of last week and the team’s opener at New England. He practiced with the Dolphins on Wednesday but was limited with a knee injury.