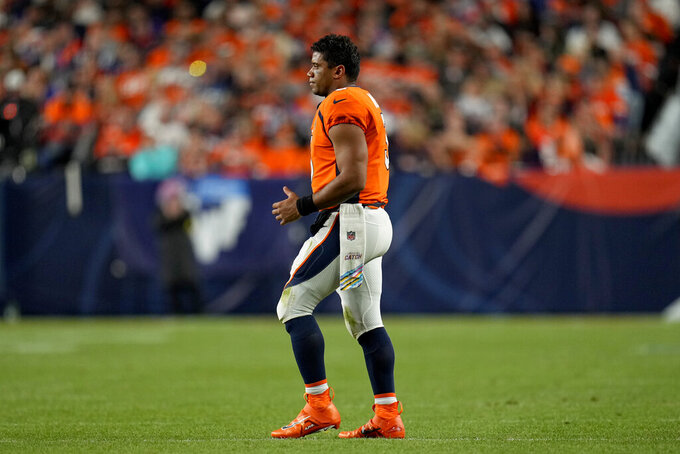 Denver Broncos quarterback Russell Wilson (3) walks out to greet teammates after a field goal during the second half of an NFL football game against the Indianapolis Colts, Thursday, Oct. 6, 2022, in Denver. (AP Photo/Jack Dempsey)

DENVER (AP) — Russell Wilson had a chance to put the game away late.

He threw an interception in the end zone.

The Denver Broncos quarterback had another shot to win the game in overtime.

He threw a game-ending incompletion on fourth-and-short while never looking at an uncovered receiver.

Brought in for moments such as this — and rewarded with a $245 million extension before taking his first snap in Denver — Wilson couldn't deliver in a 12-9 loss to the Indianapolis Colts on Thursday night.

“I let the team down tonight,” said Wilson, who threw two interceptions, including one that set up Indy's game-tying field goal with 5 seconds left in regulation. “When you play this game, the one thing you’re going to know is that you're going to go through adversity.”

Once again, Wilson and offense struggled to stay on the field, much less find the end zone. This has become a recurring theme for the Broncos (2-3), who are averaging just 15 points a game.

“At the end of the day, I’ve got to be better,” said Wilson, who came to Denver after a decade in Seattle. “I’ve got to play better. We had some good drives. We moved the ball into the red zone and we didn’t capitalize on some of them. There’s some plays here and there that we can capitalize on.”

The turning point occurred just before the two-minute warning. Leading by a field goal, the Broncos faced third-and-4 at the Indy 13. A field goal seemed assured, which, in this low-scoring affair, loomed large.

Instead of running the ball, though, the Broncos tried to put the game away. But Wilson's pass was picked off in the end zone by Stephon Gilmore. It allowed the Colts to drive down and tie it on Chase McLaughlin's 31-yard field goal with 5 seconds remaining.

“Just can’t throw that,” Wilson said. "Got to throw it out of bounds if he’s not there.”

In overtime, after Indy turned the opening possession into a field goal, the Broncos quickly moved the ball deep into Indy territory again.

On fourth-and-1 at the 5, however, Wilson overlooked a wide-open KJ Hamler and instead tried to force the ball to Courtland Sutton in the end zone. It was broken up by Gilmore.

Game over. Let the second-guessing begin.

“If we score that touchdown, everyone thinks it’s the best call in the world,” left guard Dalton Risner said. “We just couldn’t finish.”

Wilson's teammates picked him after the game. Melvin Gordon offered words of comfort, the same way Wilson did for him Sunday when his fumble was returned for a 68-yard touchdown in a loss at Las Vegas. Courtland Sutton talked to him, too. So did defensive leader Bradley Chubb, who had 2 1/2 sacks.

“No one’s ever going to get me discouraged — ever.”

Asked about the final play, Sutton simply responded: “It got batted down.”

He made sure he had his quarterback's back.

Broncos rookie head coach Nathaniel Hackett made sure the game was in the hands of Wilson. Maybe it was a lesson learned from a season-opening loss at Seattle when the Broncos skipped a fourth-and-short to try a 64-yard field goal by Brandon McManus. It veered left, and the Broncos trudged away 17-16 losers in Wilson's harsh homecoming.

Now, it's all Wilson all the time.

“It starts with me, to get him in that rhythm with all of the wide receivers and tight ends,” Hackett said. “Again, there were a couple of opportunities. I think we had a couple of drops again, a couple of penalties. We keep continually hurting ourselves, and I think that’s the thing that’s frustrating.”

At 2-3, the Broncos have a bumpy road to break a string of six straight seasons without a playoff appearance.

“I’m looking forward to turning it around," Wilson said. “Because when we do, it's going to be a special story. There’s no other way to think because that’s all I know.”