49ers' improbable run leads them back to L.A. to face Rams 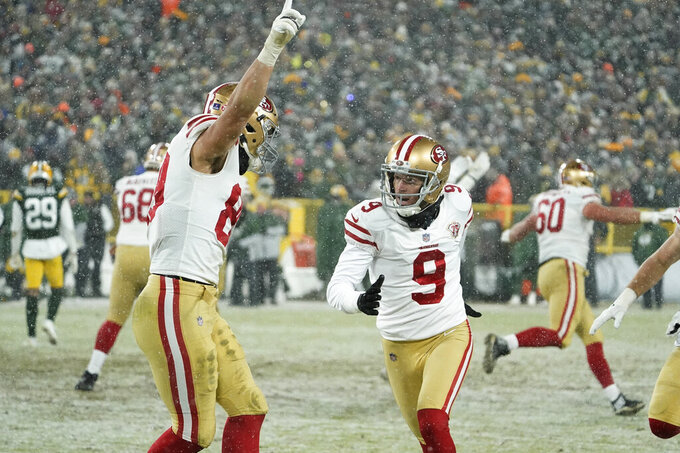 SANTA CLARA, Calif. (AP) — The San Francisco 49ers didn't know if they would even get another chance when they punted the ball away in the final two minutes of the season finale still needing a touchdown to extend their season.

Now after mounting that late-game comeback at SoFi Stadium in Week 18 and winning on the road at Dallas and Green Bay the past two weeks, the Niners head back to Los Angeles for an improbable NFC title game appearance against the Rams on Sunday.

The road has been far from easy as San Francisco (12-7) needed to force a three-and-out, drive 88 yards for the tying score and win in overtime just to get to the playoffs and then win a pair of nail-biters, including Saturday night's 13-10 win against the Packers just to get back to the title game.

Now two years after a fourth-quarter collapse in the Super Bowl against Kansas City, the 49ers are one game away from returning to that stage.

“It’s all about the finish,” safety Jimmie Ward said. “We’re still getting haunted by the Super Bowl in 2019. Last six minutes, lost the game. Coach Kyle (Shanahan) put a big emphasis on finishing.”

They've done it with a dominant defense that has held Dak Prescott and Aaron Rodgers in check the past two weeks, very little from quarterback Jimmy Garoppolo and the offensive creativity of Shanahan.

But it's been much more challenging than two years ago when the Niners rolled through the NFC playoffs.

“It’s completely different,” defensive lineman Arik Armstead said. “I was just talking to some of my teammates about how easy that year was, just kind of ran through people and got to the Super Bowl. This is a different road, lot of adversity, but I think it’s making it even more special.”

The Niners' much-maligned special teams unit saved the day against the Packers. Ward blocked a 39-yard field-goal attempt by Mason Crosby at the end of the first half to keep it a seven-point deficit.

Deebo Samuel returned the opening kick of the second half 45 yards to set up San Francisco's first score on a field goal.

The 49ers then tied the game with 4:41 to go when Jordan Willis blocked a punt by Corey Bojorquez and Talanoa Hufanga returned it 6 yards for a score.

San Francisco became the first team with a blocked punt and field goal in the same game since Buffalo did it against Houston on Jan. 1, 1989.

Robbie Gould then won it with a 45-yard field goal on the final play.

Red zone offense. The 49ers were converting at an impressive clip in the red zone the first 14 games with TDs on a league-best 73.8% of trips inside the 20. But they have struggled of late, converting just 6 of 16 (37.5%) the past five games. San Francisco failed to get in the end zone on three red zone drives Saturday with Garoppolo throwing an interception, Elijah Mitchell getting stopped on a fourth-and-1 run and Shanahan settling for a field goal on the other trip.

Armstead has transformed the defense since he moved inside midway through the season. He had two sacks, four pressures and two tackles for loss against the Packers and has five sacks in five career playoff games.

Right tackle Tom Compton struggled in pass protection all game against the Packers and was beaten for two sacks and two additional pressures, according to Pro Football Focus. Compton has played in the running game since replacing the injured Mike McGlinchey but has been a detriment at times in the passing game.

Left tackle Trent Williams has an ankle sprain and Shanahan said it will have to be “managed” this week and his status for Sunday is in doubt. ... Samuel is sore after taking a helmet to the side of his knee late in the game but should be able to practice this week. ... RB Jeff Wilson Jr. (ankle) also could play after leaving on the opening kick. ... CB Ambry Thomas' knee injury is improving and he could be back at practice this week after missing the game in Green Bay.

146. Garoppolo has averaged just 146 yards passing in five playoff starts, ranking 80th among 87 QBs with at least five starts in the Super Bowl era. San Francisco has managed to win four of those games, but might need more out of Garoppolo going forward. He was just 1 for 4 for 15 yards on throws at least 10 yards downfield Saturday.