After clutch performance, Vikings need Cousins to keep it up 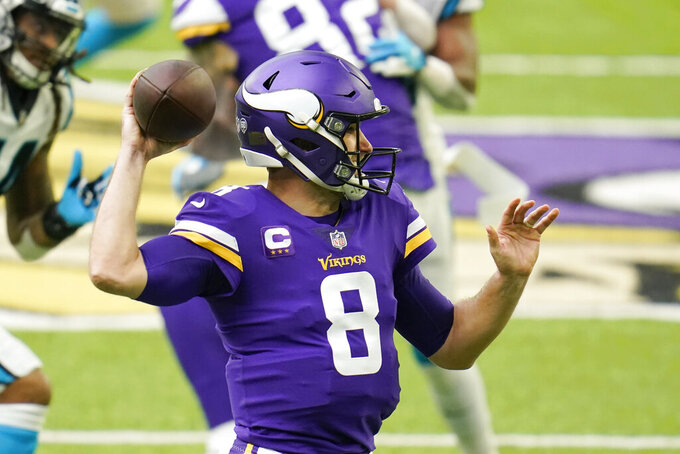 Minnesota Vikings quarterback Kirk Cousins throws a pass during the first half of an NFL football game against the Carolina Panthers, Sunday, Nov. 29, 2020, in Minneapolis. (AP Photo/Jim Mone)

MINNEAPOLIS (AP) — For all the precision and production that Kirk Cousins has displayed with the Minnesota Vikings, the lack of late-game rallies have left them and their fans wanting more from their highly paid and scrutinized quarterback.

Well, Cousins put a big checkmark in the crunch time box in his previous performance. Completing six of seven passes on a 75-yard drive capped by the go-ahead touchdown with 46 seconds left to beat Carolina 28-27 was just what the Vikings (5-6) needed to keep up in the chase for the NFC playoffs.

“To always see Kirk go out there and succeed and silence the critics, it puts a smile on my face each and every week because I see the things he does in practice. I see the type of leader he is. We are glad to have him in this building,” running back Dalvin Cook said.

“The things that are done in the past, I think it tends to carry over with him. I think it goes overlooked the plays he makes. When he plays that lights-out football, people start to be shocked but that’s just the Kirk Cousins I know.”

Those clutch throws were also just what was missing the previous week against Dallas, when Cousins and the Vikings took possession at their 25 with 1:37 remaining down 31-28 and failed to move the chains to take their only loss in five November games.

Over three seasons in Minnesota, Cousins has been credited with four game-winning drives, according to Pro Football Reference research, defined as a possession by the offense resulting in a score in the fourth quarter or overtime that puts the team ahead for good in the game. By comparison over that span, Drew Brees has 12, Aaron Rodgers has eight, Tom Brady has seven and Patrick Mahomes has six.

Since emerging from the bye week this year, though, Cousins has found quite the groove. Over those five games, he leads the NFL in passer rating, is second in yards per pass attempt and ranks third in passing touchdowns.

“Really, until the day that you retire and walk away, you’re always looking to climb the next challenge and make the next play happen. That’s kind of where my all my energy goes, rather than ever starting to feel like, ‘Oh, you did something and accomplished something,'" Cousins said. "I think that’s where you’re primed to get knocked off.”

For all the struggles he had over the first six weeks, including 10 of his 11 interceptions, Cousins has clearly become comfortable in coordinator Gary Kubiak's offense more than halfway through a second season with the scheme implemented last year when Kubiak served as an offensive adviser. Cousins is eighth in the league in passer rating for the season, quite the climb out of the hole he was in at the end of October.

“I think it’s just ownership of the whole system,” backup quarterback Sean Mannion said. “I think when you have a full year’s worth of banked reps last year you just really hit the ground running.”

Even during the middle of the previous game, there were rough stretches. Playing without wide receiver Adam Thielen was an additional challenge, as were the unorthodox pressures and coverages that Carolina often called. The sack of Cousins that caused a fumble return for a touchdown sure sent the second half off to a bad start.

“Every week, really, is a roller coaster. Think back to so many of our games this year, wins and losses, you’re all over the map all game long,” Cousins said. “You learn as you play longer to just kind of stay even keel and steady, not get too high and not get too low, but just keep playing and believe if you keep playing that good things can happen.”

Having Thielen back in the lineup for the stretch run will be a bigger help. The two-time Pro Bowl pick, who's tied for second in the league with 11 touchdown receptions, was cleared Wednesday from quarantine and activated from the COVID-19 reserve list.

Long snapper Andrew DePaola was also signed from the practice squad, finalizing his takeover of the job from Austin Cutting, who was waived Tuesday.