After statement win over Steelers, Bengals prep for 0-3 Jags 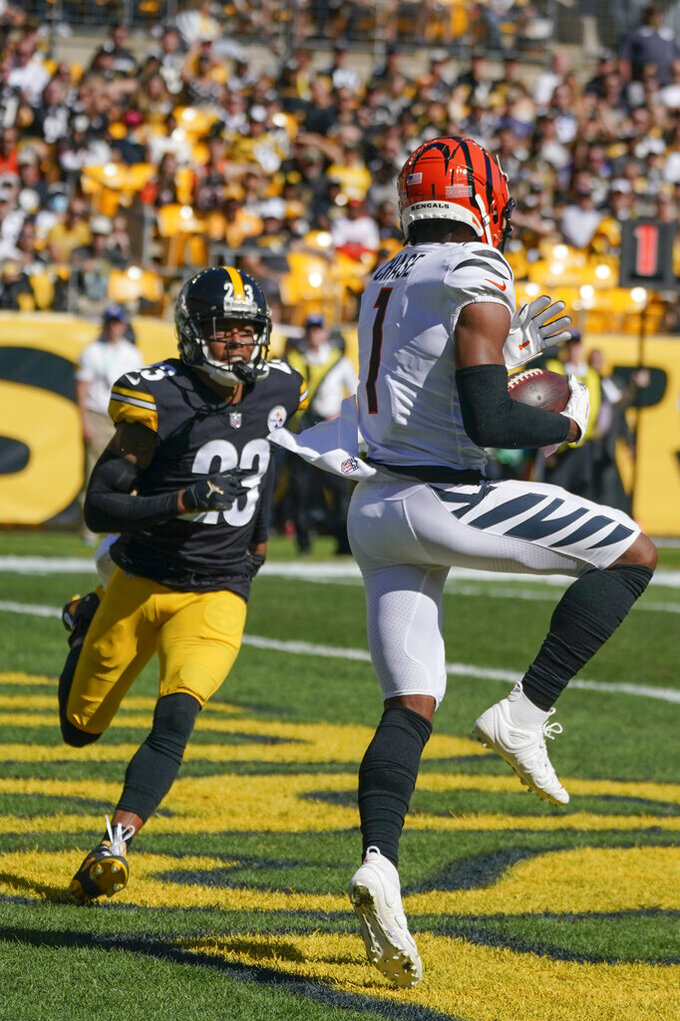 CINCINNATI (AP) — The Cincinnati Bengals played one of the most consistent and complete games of the Joe Burrow era Sunday against none other than the Pittsburgh Steelers.

But there is little time to reflect on the 24-10 road win over the divisional rival Steelers and future Hall of Famer Ben Roethlisberger. The Bengals have to turn around and get ready for Urban Meyer, Burrow's former coach at Ohio State, who now leads the winless Jacksonville Jaguars. The Jags visit for a Thursday night matchup.

Despite throwing an interception against the Steelers, Burrow may have been at his efficient best on Sunday, completing 14 of 18 throws for 172 yards and hooking up with his old LSU teammate Ja'Marr Chase for a pair of touchdowns — one of them a spectacular fingertip grab in the end zone — and another to Tyler Boyd. Playing on a surgically repaired left knee, Burrow looked nimble and mostly unfettered by defenders.

“I felt really good about my movement in the pocket and movement outside the pocket, as well,” he said. “I checked to the quarterback draw. It’s exciting for me to feel that way and feel confidence in my leg.”

At 2-1, Cincinnati has already matched the number of wins in the entire 2019 season, which was the first for coach Zac Taylor.

“This is something we needed,” Taylor said. “It’s just a small step in the journey for the rest of the season. We expect to be on the road, win divisional games to achieve all the things we talk about internally as a team. This was something that’s necessary. And it’s a big win. ”

The offense is starting to come up with big plays. Burrow distributed the ball to eight different receivers, and running back Joe Mixon was reliable, rushing for 90 yards. The defense also had an outstanding game, sacking Roethlisberger four times, with linebacker Logan Wilson picking him off twice.

Efficiency on third downs. Cincinnati has converted just one-third (12 of 36) of those opportunities through three games.

The offensive line, which has heard — and deserved — a load of criticism, did not give up a sack against the Steelers. After being sacked nine times in the first two games, Burrow came out with a clean uniform. And that's with rookie Jackson Carman playing in place of injured guard Xavier Su'a-Filo. It's worth noting, however, that the Steelers were without edge defenders T.J. Watt and Alex Highsmith. Both were injured.

“I’d be lying if I said that it didn’t make a difference not having all their guys out there,” Burrow said.

Tight ends were not utilized in the offense Sunday. C.J. Uzomah was targeted just once without a catch. And Drew Sample didn't make it onto the stat sheet.

Keep up the momentum and be fresh for Thursday. Ignore the pregame hype over Meyer and Burrow meeting again. Keep Burrow upright so he can do his thing.