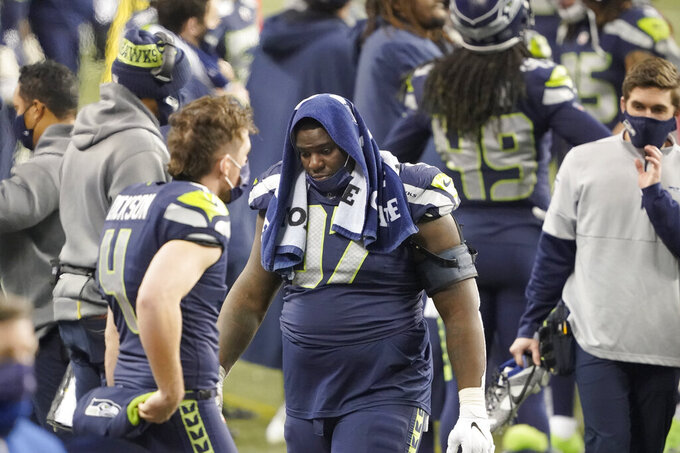 Seattle Seahawks defensive tackle Poona Ford turns away from the field as he stands at the bench late in the second half of an NFL wild-card playoff football game against the Los Angeles Rams, Saturday, Jan. 9, 2021, in Seattle. (AP Photo/Ted S. Warren)

SEATTLE (AP) — For all the success through the years, there is an indisputable fact Russell Wilson, Pete Carroll and the rest of the Seattle Seahawks more veteran players can’t avoid.

Since the Seahawks loss to New England in the Super Bowl in February 2015, their playoff performances have been complete failures by their own standards.

It’s now been six years since Seattle won more than one game in a single postseason. The Seahawks have failed to advance beyond the divisional round since that last Super Bowl appearance following the 2014 season. No NFC championship game appearances. No chances at getting back to playing for a title.

The latest abrupt playoff exit may be the most troubling following Saturday’s 30-20 loss to the Los Angeles Rams. After getting outcoached and outplayed by their division foe, the Seahawks are unexpectedly headed into an important offseason sooner than anyone expected.

“Out of all the years since we lost to New England, I thought that this year was our best chance in going,” Seattle linebacker K.J. Wright said on Sunday. “I truly felt like we had all the pieces. We had all the confidence in the world to go back, and 12-4 that’s a really good season. It’s just unfortunate that yesterday was just one of them days.”

It’s the second time in three seasons the Seahawks were ousted from the postseason in the wild-card round after losing in the 2018 playoffs at Dallas.

In the five playoff appearances since losing in the Super Bowl, the Seahawks have a 3-5 record.

Most franchises would be thrilled to have that many playoff appearances. But for the Seahawks, it’s a continual run of what they see as missed opportunity.

“We got to be better. We got to find ways to win these type of matchups,” Wilson said. “Frustration? I mean, yeah, of course I’m frustrated.”

In previous seasons, there seemed to be an understanding or justification for why playoff runs fell short of reaching their full potential.

A year ago, there was a feeling of optimism after losing in the divisional round at Green Bay when Seattle was so depleted by injuries at the key position of running back that Marshawn Lynch was brought out of retirement to carry the load.

That was not the case in the aftermath of Saturday. Optimism was scarce. Left in its place was confusion about what happened and what the path is going forward after Seattle mortgaged a significant amount of its future by acquiring Jamal Adams and Carlos Dunlap to win this season.

“We got to make that next step. I think this is part of the process, to figure out this offseason along the way, and how we can do that and do whatever it takes,” Wilson said. “So I’m looking forward to starting 2021 with a new season come next fall. Unfortunately today we didn’t get it done.”

The aftermath of the loss to the Rams made clear there are issues about identity on the offensive side for Seattle, which seemed unfathomable at the start of the season. Wilson was the leading MVP candidate throwing a record number of touchdowns to begin the season as Seattle started 5-0.

But the limitations of that offense which grew as the season progressed were on full display in the loss to the Rams. Seattle’s’ 278 total yards were a season worst, as was Wilson’s 40.7% completion rate, the only time all season he didn’t hit at least 55% of his passes.

Both Wilson and Carroll expressed a frustration at the lack of offensive adjustments as the season progressed, even as Seattle’s defense was making dramatic improvement.

“At one part of the year, it was available, and we took it, and then in the second part of the year, against the really good defenses that we played, they were able to keep us out of that kind of a mode,” Carroll said. “I wish we would have adapted better under those circumstances.”