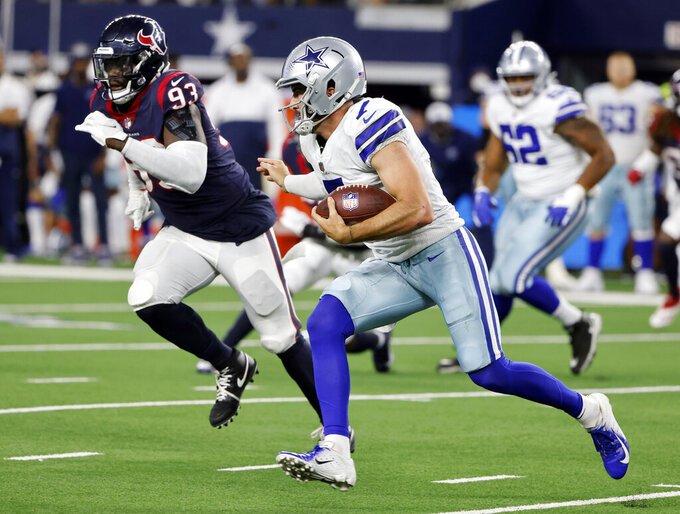 FILE - In this Aug. 21, 2021, file photo, Dallas Cowboys quarterback Ben DiNucci, front right, runs the ball as Houston Texans defensive end Shaq Lawson (93) pursues in the second half of a preseason NFL football game in Arlington, Texas. The New York Jets have acquired edge rusher Lawson from the Texans in exchange for a sixth-round pick in next year's NFL draft, according to a person with direct knowledge of the deal. (AP Photo/Michael Ainsworth, File)

FLORHAM PARK, N.J. (AP) — The New York Jets are replacing one sack-happy Lawson with another.

Edge rusher Shaq Lawson was acquired by the Jets from the Houston Texans on Sunday for a sixth-round pick in next year's NFL draft, according to a person with direct knowledge of the deal.

The Jets were in dire need of a pass-rushing specialist after Carl Lawson was lost for the season on Aug. 19 with a ruptured Achilles tendon. New York filled that need by bringing in Shaq Lawson, who has 20 1/2 sacks in five seasons with Buffalo and Miami. He was acquired by Houston in a trade with the Dolphins in March.

NFL Network first reported the Jets' trade for Shaq Lawson, who is not related to Carl Lawson. The person confirmed the deal to The Associated Press on condition of anonymity because neither team had announced the trade.

Shaq Lawson was the 19th overall pick by Buffalo out of Clemson in 2016. After he had 10 sacks in three seasons, the Bills opted to not exercise his fifth-year option — making him a free agent in 2020. The 27-year-old Lawson, who had a career-high 6 1/2 sacks in 2019, signed a three-year, $30 million contract with Miami last year.

He had four sacks in 14 games, including seven starts, for the Dolphins. He also returned a fumble for a touchdown. In March, Miami traded him and a sixth-round pick in this year's draft to Houston for linebacker Benardrick McKinney and a seventh-rounder.

Shaq Lawson has two years and $9.8 million left on his contract, which was restructured by Houston in March. He is making $990,000 this season.

He is a much-needed addition to a Jets defense that was deflated when Carl Lawson went down during a joint practice session with the Packers in Green Bay. Much of what coach Robert Saleh and defensive coordinator Jeff Ulbrich plan to do on defense is predicated on having a solid pass rusher to complement a pocket-squeezing D-line.

They had that in Carl Lawson, who was signed to a three-year, $45 million contract in March. He had been perhaps the Jets' best player in training camp, consistently making his presence felt in the backfield and giving New York perhaps its first big-time pass rusher in 20 years.

The Jets also lost defensive end Vinny Curry for the season last week, when he announced he has a rare blood disorder that required his spleen to be removed. He developed blood clots and is taking blood thinners that prevent him from having physical contact for the next three to six months.

Shaq Lawson will now help fill that pass-rushing void as a young but experienced edge rusher. The Jets also have Bryce Huff, a second-year defensive end from Memphis, who is expected to get increased playing time.