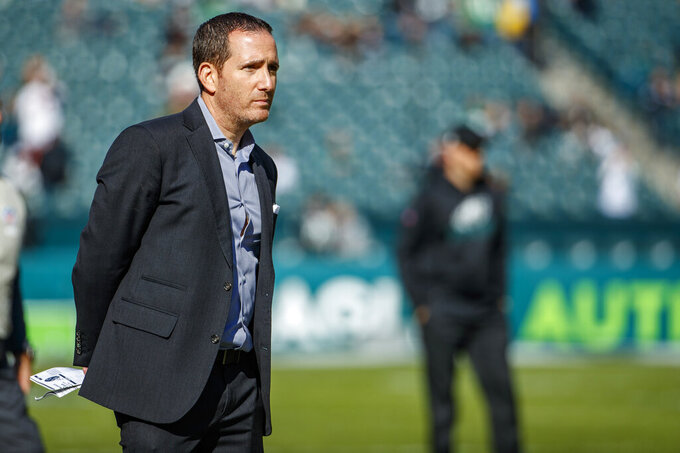 FILE - In this Nov. 3, 2019, file photo, Philadelphia Eagles general manager Howie Roseman stands on the field before the team's NFL football game against the Chicago Bears in Philadelphia. The Eagles have drafted so poorly over the past seven years that fans go to baseball games and chant for Roseman to be fired. (AP Photo/Chris Szagola, File)

PHILADELPHIA (AP) — The Philadelphia Eagles have drafted so poorly over the past seven years that fans go to baseball games and chant for general manager Howie Roseman to be fired.

Carson Wentz is the only player drafted by Philadelphia since 2014 who has been to a Pro Bowl and he was traded to Indianapolis two months ago. The Eagles have done well accumulating extra draft picks through trades, including moving down from No. 6 to No. 12 in the first round on Thursday night, but there’s little confidence in their ability to select quality players.

“We’re proud of our group of scouts and our front office who have contributed to our team,” Roseman said this week. “It hasn’t always been perfect. The draft is an inexact science. When you look at hit rates throughout the draft and where you’re picking, whether it’s in the first round and going down less and you look at the rest of the league, it’s certainly an inexact science. We’re constantly striving to do better.”

The Eagles took wide receiver Jalen Reagor with the 21st overall pick last year. He had 31 catches. Justin Jefferson went one pick later to Minnesota. He caught 88 passes for 1,400 yards and seven touchdowns.

Reagor battled injuries and still may pan out but his inconsistency as a rookie, coupled with Jefferson’s success, contributes to the “Fire Howie” chants that resonant at Phillies games and wherever Eagles fans are gathered.

Sirianni became the brunt of criticism in fickle Philly this week because he said he played rock, paper, scissors with draft prospects to gauge their competitiveness during virtual interviews.

Nobody will care if the team ends up selecting a star player.

The Eagles added an extra first-round pick in 2022 by trading down six spots and it’s possible they’ll move back down or up again. If they stay put, it would be wise for a rebuilding team with many holes to take the best player available.

Even a quarterback is a possibility if one of the top guys falls. The team didn’t commit to Jalen Hurts as the starter, mainly as pre-draft strategy in case a QB slips and they wants to make a deal.

“The reason we traded back from six to 12 was because flexibility creates opportunity,” Roseman said.

Since selecting tight end Keith Jackson 13th overall in 1988, the Eagles have picked among the top half of the first round 13 times. They’ve taken an offensive or defensive lineman 11 times and the other two picks were QBs. The team values linemen, so Slater and USC’s Alijah Vera-Tucker are strong candidates to bolster the offensive side. Michigan’s Kwity Paye is a possibility if they choose an edge rusher.

Some teams may be concerned that Smith, who won the Heisman Trophy, measured just over 6-foot and weighed 166 pounds at the medical check in Indianapolis last week. The Eagles don’t shy away from smaller wideouts, however. They hit on DeSean Jackson several years ago and have been looking for a player like him.

“Good players come in all shapes and sizes, and so we’re not going to discriminate based on any of those things,” Roseman said.

The Eagles have 11 total picks, including two in the third and seventh rounds and three in the sixth. Roseman is known for being active, so look for movement.

“We’re talking to teams in front of us,” Roseman said. “We’ll talk to teams in back of us. We’ll figure out what they’d be willing to do if their guy is there.”

Three-time Pro Bowl tight end Zach Ertz is likely to be traded during the three-day draft. Ertz and the team couldn’t agree on a contract extension before last season and it became clear the organization is ready to move on. The Eagles could add Ertz to sweeten any trade package.

There have been several reports saying the coaching staff and scouting and analytical departments haven’t been on the same page in recent years. Roseman, Sirianni and vice president of player personnel Andy Weidl made it clear that’s not the case.

“It’s really a total group effort inside the building to get this going for next week, and we’re really excited about that,” Roseman said.