Banged-up Titans lean on next man up before Colts' rematch 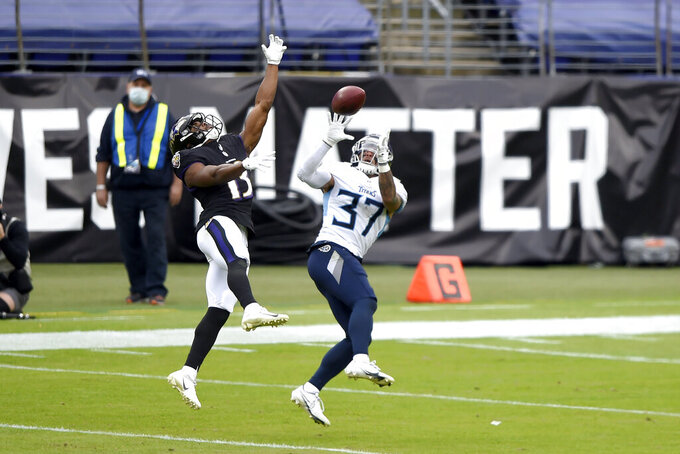 NASHVILLE, Tenn. (AP) — The Tennessee Titans are testing the NFL's cliche of next man up.

Offensive tackle Isaiah Wilson, Tennessee's first-round draft pick, finally dressed for a game last week but has yet to play a snap after two stints on the reserve/COVID-19 list since the start of training camp.

Tennessee coach Mike Vrabel talks about opportunity. The Titans (7-3) have plenty of those available with 10 players on injured reserve as they prepare for their second showdown with Indianapolis within three weeks on Sunday — with only the top of the AFC South on the line.

“Some guys, that’s the definition of a pro,” Vrabel said. “They make the hard look easy. Everybody that’s healthy and available that’s practicing on the active roster or the practice squad knows their job is to be ready to play in a football game. Sometimes that happens, sometimes it doesn’t. But that’s their job.”

And now leading tackler Jayon Brown is the latest on injured reserve.

“You just hate to see it, especially someone like Jayon who comes in and works his tail off and does everything the right way,” defensive lineman DaQuan Jones said Wednesday. "At the same time, it's the next man mentality and whoever we put back there ... we're all confident they're going to get the job done.”

He might be starting next to Aaron Brewer, who got his first career start last week filling in for injured left guard Rodger Saffold. Center Ben Jones played despite not practicing all week with an injured knee. Quessenberry and Brewer had key blocks on D errick Henry's 29-yard TD run in overtime.

“I just had to go out there and do my job,” Henry said.

Outside linebacker Derick Roberson and safety Amani Hooker also got the first starts of their career last week. Hooker came up with six tackles and his team-best third interception of the season.

The Titans used veteran Will Compton to replace Brown. Other options include David Long, who's been on the reserve/COVID-19 list, Daren Bates and Nick Dzubnar.

Tennessee is close to getting some players back thanks to the NFL allowing players to return after missing three games on injured reserve.

Jackson was activated to the three-week window to practice for a return on Nov. 11. The Titans also moved Kern to that return window Tuesday and are confident enough he'll be available Sunday that they waived punters Trevor Daniel and Ryan Allen, who was on the practice squad.

Cornerbacks Kristian Fulton, their second-round pick out of LSU in April, and Tye Smith also were moved to the practice window for possible activation off injured reserve.

“Obviously when you get a really good football player a chance to be back at any point in time it makes you feel good," special teams coordinator Craig Aukerman said.

NOTES: Vrabel is taking advantage of the Thanksgiving holiday to give his Titans a day off Thursday after working Tuesday instead. ... WR Adam Humphries and S Kenny Vaccaro each practiced fully Wednesday in a step toward being cleared from the concussion protocol. Saffold (ankle), Jones (knee) and CB Malcolm Butler (rib) were limited. Jackson, WR A.J. Brown (knee) and Kelly did not practice.