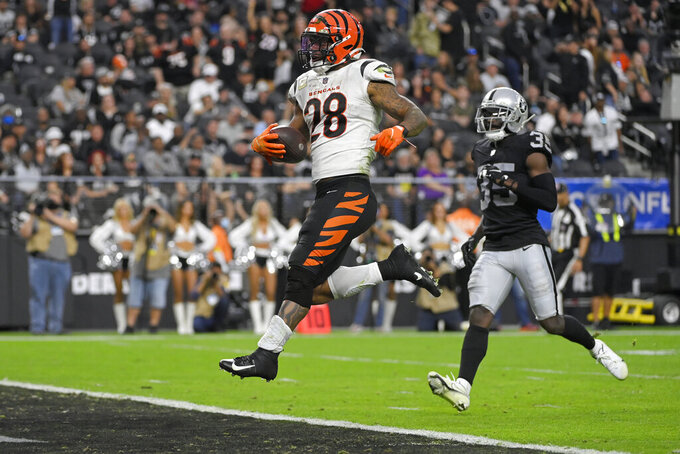 LAS VEGAS (AP) — Cincinnati Bengals running back Joe Mixon asked his teammates at Thursday’s practice what the plans were for a touchdown celebration in lieu of their first-ever trip to Las Vegas.

Mixon rushed for 123 yards, scored two touchdowns, celebrated in the end zone by pretending to shake and roll a pair of dice, and the Bengals defeated the Las Vegas Raiders 32-13 on Sunday.

The well-rested Bengals (6-4) came out of their bye week and snapped a two-game skid to climb back into the AFC North race, while the Raiders (5-5) lost their third straight since their bye week when they led the AFC West

“We don’t talk a lot about big picture this season, what games we have coming up ... we just put ourselves in a position to control our destiny at this point,” Bengals coach Zac Taylor said. “As long as we take care of our business one week at a time then we’ll be in great shape.”

Joe Burrow was 20 of 29 for 148 yards and threw one touchdown for Cincinnati, while Offensive Rookie of the Year candidate Ja’Marr Chase caught three passes, including one TD. Chase leads all rookies with eight touchdowns this season.

Bengals kicker Evan McPherson had four field goals and became the 13th player with three of 50 yards or more in a game.

“Against that team, you just try to stay on schedule,” said Burrow, who was just 12 of 18 for 78 yards and was sacked twice in the first half. “For the most part, we were able to get first downs when we needed them.”

Meanwhile, Cincinnati’s defense limited the Raiders to 278 yards, the second time the Bengals held an opponent to fewer than 300 yards in a game.

Raiders quarterback Derek Carr finished 19 of 27 for 215 yards, one touchdown and one interception. Tight end Darren Waller caught seven passes for 116 yards, while his backup Foster Moreau’s lone catch was a 19-yard touchdown.

Las Vegas failed to convert on its first six third-down attempts —a stretch of 14 straight over two games from last week’s loss to Kansas City — until Carr hit Hunter Renfrow for 8 yards on a third-and-2 with two minutes left in the game.

A conversion too late, as it turned out, as Carr was sacked on the next two plays, fumbled on the second one, and watched the Bengals wrap up the win.

“We just wanted to get after the quarterback, that’s always number one, getting him uncomfortable,” Bengals cornerback Eli Apple said. “Taking away the quick easy stuff, making them earn everything. We just wanted to be more aggressive for sure.”

Las Vegas’ ineffectiveness on third downs and in the red zone was amplified by costly penalties. The Raiders were flagged seven times for 77 yards, while Cincinnati had just one penalty for 5 yards.

“We had penalties in critical situations and extended drives for them against our defense,” Raiders interim coach Rich Bisaccia said. “We gave some big push in there. We expected to get some runs out of them from a team that runs the ball really well. We have to look at how the penalties actually hurt us and why our offense is out of sync right now.”

The Raiders have been outscored 96-43 since their bye week.

“The men in our room, the way we work, the way we go after things, it shouldn’t always end like this,” Raiders quarterback Derek Carr said. “We have another one in a few days against a really good football team. If we don’t want to stand up here and have to do this again, we better get it right.”

Things started off well for the Raiders after Yannick Ngakoue gifted the offense when his strip-sack fumble on the Bengals’ first drive ended up in the hands of Dallin Leavitt, who returned the ball 32 yards to the Cincinnati 9.

But the Raiders, who entered Week 11 ranked 26th in converting red zone opportunities into touchdowns, mustered just 1 yard on their opening drive and settled for a field goal.

The Raiders didn't find the end zone early until the fourth quarter when Carr found Moreau for a 19-yard TD strike to get Las Vegas within 16-13.

But after Chase’s touchdown made it 22-13, Carr was intercepted by Apple and two plays later Mixon added the exclamation point with a 20-yard run to the end zone that put the game out of reach.

The Raiders, who have lost five of seven since their 3-0 start, are beginning to resemble the team that started its 2019 season 6-4 and finished 1-5, and opened last season 6-3 before closing 2-5.

Las Vegas: at Dallas on Thanksgiving.