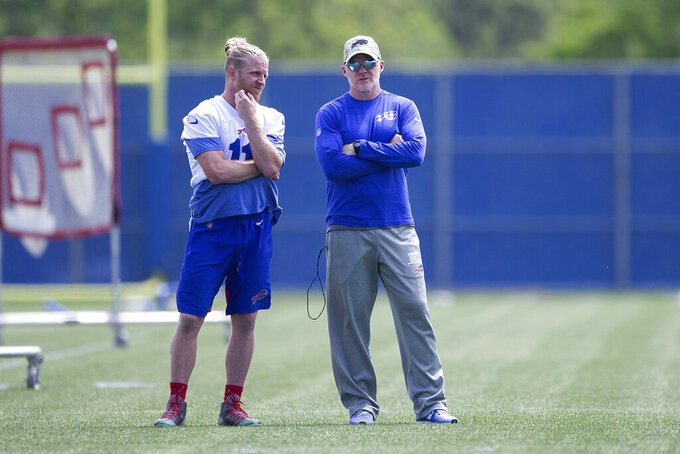 BUFFALO, N.Y. (AP) — Quarterback Josh Allen and Buffalo Bills players are split on whether to get vaccinated at a time coach Sean McDermott raised concerns his team could fall behind in having COVID-19 protocol restrictions loosened for the start of training camp.

In addressing what’s become a divisive issue among several high-profile Buffalo players and at least one of their spouses on Tuesday, McDermott focused his message on attempting to educate — rather than convince, as he put it — players to get vaccinated.

Without saying how many Bills have received the vaccine, McDermott said time is running short for Buffalo to return to a sense of normalcy in terms of holding full-team meetings and practices.

“I’m concerned about it. I’m being very upfront,” McDermott said during a half-hour video conference call held a day after the Bills opened their first week of voluntary practices.

“I think that time element comes into play a little bit right now, and I think, a little bit, it’s working maybe against us or against maybe more players getting it.”

He was referring to the minimum six-week period for those receiving a two-shot vaccine to be deemed fully vaccinated. The time frame will soon be pushing into the start of training camp in late July.

The number of vaccinated players could affect Buffalo’s proposal to resume camp at its traditional preseason site in suburban Rochester a year after all NFL teams were restricted to practicing at their own facilities.

McDermott favors holding part of camp at a remote location because it contributes to player bonding.

Allen acknowledged the issue being a “hot topic” in declining to say whether he’s been vaccinated.

The third-year starter then provided a mixed response when outlining internal discussions taking place between the team’s leadership council of players.

“What the right answer is and how to go about it, we’re not sure, and we’re trying to get to a conclusion,” Allen said. “But at the same time, we’re letting everybody make their own personal decision.”

As for McDermott’s concerns of time running short, Allen said “sooner is better than later,” while noting whatever decisions are reached are one “we have to live with as a team.”

The NFL and NFL Players Association are encouraging but not mandating players to get vaccinated. The NFL, however, is considering loosening its practice and meeting restrictions for teams who reach a certain percentage of players and staff being vaccinated.

Last year, teams were limited to hosting most meetings via Zoom, with restrictions placed on how many players and coaches could gather at one time. Team officials and players were also required to undergo daily COVID-19 testing and wear masks.

McDermott already experienced an advantage last month, when Bills staff and owners were allowed to go without masks while overseeing the draft together at the team’s headquarters because they were vaccinated.

In calling it a personal decision, McDermott noted there are professional as well as health and safety concerns that should be considered.

“It’s kind of two-pronged, if you will, with health and safety, and there’s also what you’ve got to do to do your job,” McDermott said. “And so I think those are the two prongs of the fork right now that must be considered, and considered seriously.”

He specifically referred to tight end Tommy Sweeney as a reason players should get vaccinated. Sweeney missed the entire season after testing positive for COVID-19 and then was diagnosed with an inflamed heart, which is considered an aftereffect.

Sweeney is expected to be cleared to return this season.

The Bills had about 70 players participate for the voluntary workout. Among those not present were receiver Stefon Diggs and defensive tackle Star Lotulelei, who is scheduled to rejoin the Bills after opting out from playing last season because of COVID-19 concerns.

Getting vaccinated has become a source of offseason debate among some of the Bills, starting with Allen. Last month, he called it “a tricky situation” in telling The Ringer podcast he was still debating whether to receive the COVID-19 vaccine by calling it a personal choice.

Earlier this month, the NFL informed teams they cannot release players simply because they are not vaccinated.

The league’s directive came in response to Bills general manager Brandon Beane hypothetically suggesting he’d consider doing so if it would provide more freedom within the team facilities for meetings and offseason programs.

Three weeks ago, Bush deleted a post in which she noted numerous high-profile players are against receiving the vaccine, and questioned whether any push to have Bills vaccinated would become divisive.