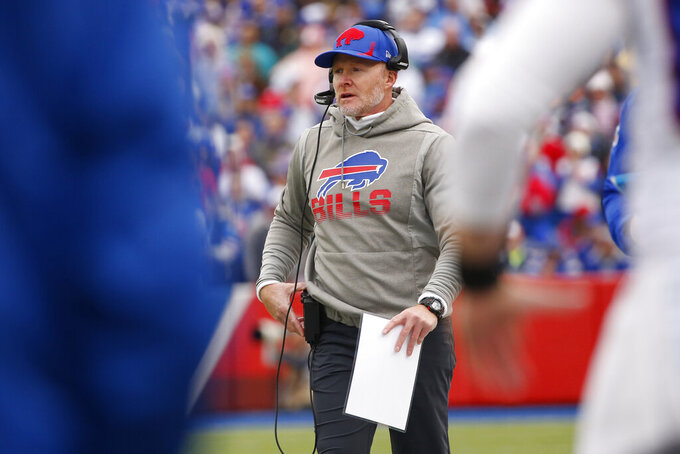 OPENING LINE: Buffalo by 14½, according to FanDuel Sportsbook.

TURNOVER DIFFERENTIAL: Bills plus-13; Jaguars minus-11.

BILLS PLAYER TO WATCH: Make it players. The safety tandem of Jordan Poyer and Micah Hyde have three interceptions each as part of a defense tied for the NFL lead with 11 picks, and is 12-0 with 18 interceptions against opposing quarterbacks with 16 or fewer starts.

JAGUARS PLAYER TO WATCH: The other Josh Allen, Jacksonville’s standout pass rusher, is coming off his first multi-sack performance in two years and hopes to add his namesake to a growing list of quarterbacks he’s dropped for a loss. Buffalo’s Allen and Jacksonville’s Allen were the seventh overall pick in consecutive drafts and have never met.

KEY MATCHUP: Buffalo’s stout run defense against a team that needs to run the ball to have a chance. The Bills rank sixth against the run and have allowed just one 100-yard rusher (Tennessee’s Derrick Henry) in seven games. Jacksonville could be without James Robinson (bruised heel), leaving journeyman Carlos Hyde to start.

SERIES NOTES: The teams last played in Jacksonville in the wild-card round of the 2017 playoffs, with Tyrod Taylor and Blake Bortles at quarterback. Jacksonville won 10-7 thanks to a second-half touchdown from Bortles to Ben Koyack. Both teams have endured drastic makeovers since.

STATS AND STUFF: Buffalo has won five of six since a season-opening loss to Pittsburgh, with the lone setback a 34-31 nail-biter at Tennessee three weeks ago. Allen slipped on a fourth-down run at the Titans 3-yard line in the waning seconds. … Allen has at least two TD passes and a passer rating over 100 in five consecutive games, the longest active streak in the NFL. He has 112 total touchdowns, tied for third most by a quarterback in his 50 career starts. … Beasley had nine catches for 101 yards and two touchdowns in his last game against Jacksonville. … Jaguars coach Urban Meyer says he and GM Trent Baalke have studied Buffalo's roster makeover, which Meyer called “one of the best builds in recent history.” ... The Jaguars haven’t won on U.S. soil in 420 days; their lone 2021 win was over Miami in London. … Jaguars QB Trevor Lawrence ranks second among rookies in completions (161), yards passing (1,703) and TD passes (8). … CB-turned-WR Jamal Agnew caught his first TD pass last week and has at least five receptions in three consecutive games.

FANTASY TIP: Allen, Knox and WRs Beasley, Stefon Diggs and Emmanuel Sanders should be considered must starts for Buffalo. Jaguars TE Dan Arnold is a decent sleeper pick. He has 16 catches for 159 yards in his last three games.