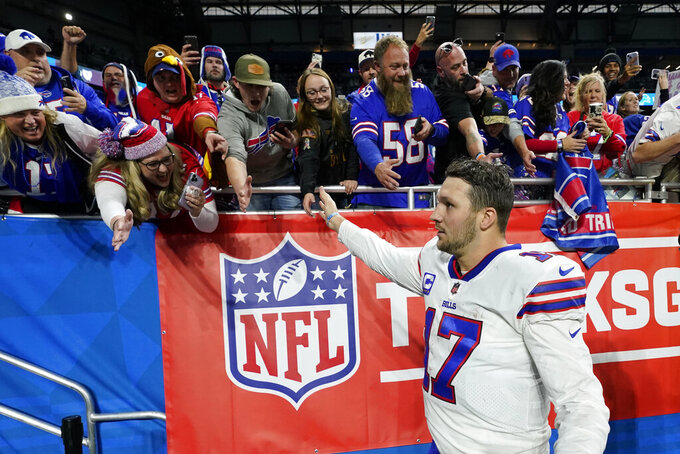 ORCHARD PARK, N.Y. (AP) — Josh Allen looked exhausted on the sideline after the final whistle blew, when the Buffalo Bills quarterback turned and wrapped his arms around receiver Stefon Diggs to give his teammate a big, long hug.

Allen, with his wonky and sore throwing elbow, and Diggs, following several uncharacteristic drops, had just overcome their deficiencies to help rally Buffalo to a 28-25 victory over the Detroit Lions. In doing so, they put a capper on one of the more chaotic two-week stretches in team history — three if you include the gut punch of a 33-30 overtime loss to Minnesota in which the Bills squandered a 17-point lead.

Allen and Diggs found relief Thursday in being buoyed rather than beaten.

“I rejoiced,” Diggs said. “We didn’t get off to the best start, but you keep rolling with the punches. Things aren’t going to be perfect, but I’m riding with my guy.”

The Bills (8-3) are far from perfect, and they face numerous challenges ahead, starting with the health of star pass rusher Von Miller, who was carted off the sideline in the first half after hurting his right knee. Miller is out indefinitely, and was ruled out of Thursday's upcoming game against New England by coach Sean McDermott on Friday.

There also is the issue of their schedule, which will determine whether Buffalo can win a third consecutive AFC East title. The Bills already have lost to Miami (7-3) and the New York Jets (6-4) and finish the season with four of their final six games against division rivals, starting with the Patriots (6-5).

What is becoming unquestioned is the mettle this team has shown in light of the obstacles — from injuries to snowstorms — thrown in its path.

Buffalo became the NFL’s first team to win games at the same away venue in a span of five days. The Bills were coming off a 31-23 “home” win over Cleveland on Sunday in a game played at Detroit’s Ford Field after a storm dumped as much as 7 feet of snow on western New York.

Against Detroit, Buffalo already was down two defensive ends, starter Greg Rousseau and A.J. Epenesa, before Miller went down. The Bills' secondary has been depleted by a rash of injuries all season, though starting cornerback Tre’Davious White was eased back in against Detroit. He played 16 snaps in his first game since tearing a left knee ligament a year ago on Thanksgiving.

And then there’s the issue of Allen’s arm, which has not looked the same since being wrenched awkwardly in the closing moments of a 20-17 loss to the Jets on Nov. 6.

On Thursday, Allen continued misfiring passes and threw his 11th interception and fourth in the red zone. He finished 24 of 42 for 253 yards with two touchdowns, and a TD rushing. The 253 yards passing were Allen’s fourth fewest with 42 or more attempts, and he now has turned the ball over eight times (seven interceptions and a lost fumble) in his past five outings.

“If anybody’s playing injury free in this league, they’re probably lying to you,” Allen said. “If I’m going to be the guy that I think I am and my teammates think I am, I’ve got to be that guy. That’s all there is to it.”

Allen was when it counted the most.

Trailing 22-19 with 8:59 remaining, he went a combined 8 of 9 for 85 yards and a TD, and he added 29 yards rushing on Buffalo’s final two drives. Diggs, meanwhile, caught five of those passes for 65 yards and a touchdown.

“That’s what great players do,” coach Sean McDermott said. “They step up in those big moments.”

Fourth-quarter comebacks. Three of Buffalo’s wins this season have been decided in the final 64 seconds.

Red-zone offense. Though Buffalo scored three TDs on four trips inside the Lions 20, Allen’s interception was the Bills' sixth turnover in the red zone this season. Buffalo committed a combined five red-zone turnovers from 2019-21.

DT Ed Oliver. The fourth-year player was in on six tackles, two of them for losses, including a sack of Jared Goff for a safety, and forced a fumble.

CB Dane Jackson. The third-year starter struggled in covering Amon-Ra St. Brown, who had nine catches for 122 yards and a TD.

Aside from Miller, starting left tackle Dion Dawkins did not return after hurting his ankle. ... McDermott listed CB Christian Benford as week to week after he hurt his oblique against Detroit.

4-2 — Bills' record in games decided by one score this season. Buffalo was 0-6 last year, including playoffs.