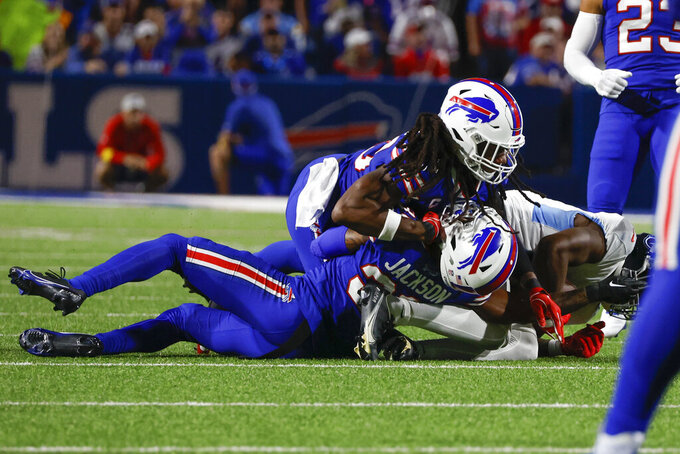 Buffalo Bills cornerback Dane Jackson, bottom, is injured on a play during the first half of an NFL football game against the Tennessee Titans, Monday, Sept. 19, 2022, in Orchard Park, N.Y. (AP Photo/Jeffrey T. Barnes)

ORCHARD PARK, N.Y. (AP) — One of the remarkable things about the Buffalo Bills starting the season at 2-0 is the manner in how they’ve steamrolled opponents while missing several key players in addition to the lopsided margins of victory.

On Monday, a defensive front without starter Ed Oliver and his backup Tim Settle, stonewalled Derrick Henry, who was limited to 25 yards on 13 carries, while scoring on a 2-yard dive in a 41-7 rout of the Titans.

And let’s not forget a Josh Allen-led offense which needed less than three quarters to generate 317 yards passing and four touchdowns despite missing No. 2 receiver Gabe Davis.

“We got our (butts) kicked, plain and simple,” Titans coach Mike Vrabel said following the largest margin of defeat in his four-plus years in Tennessee.

The Bills entered the season with what was regarded as their deepest roster since the franchise’s Jim Kelly heydays in the early 1990s. And nothing, so far, has provided any indication of a weakness.

That depth could be tested on Sunday, when a potentially injury-thinned Bills team travels to play the suddenly resurgent division rival Miami Dolphins (2-0).

The retooled Dolphins made a splash of their own in rallying from a three-TD, fourth-quarter deficit in a 42-38 win over Baltimore on Sunday.

Already missing White, who isn’t expected to return until late October from a left knee injury, Buffalo’s secondary could be down two more starters.

Cornerback Dane Jackson, filling in for White, is questionable to play after spending a few hours in the hospital, where tests showed no serious damage to his neck or spine after he was struck by a teammate against Tennessee. Veteran starting safety Micah Hyde was also carted off after sustaining a neck injury in the second half.

That leaves Buffalo potentially having to lean heavily on rookie cornerbacks, Kaiir Elam and Christian Benford, to defend Miami’s dynamic duo of Tyreek Hill and Jaylen Waddle, who combined for 261 yards receiving and scored two touchdowns apiece against Baltimore.

Oliver’s status is uncertain because of an ankle injury, which could hamper Buffalo’s ability to pressure Tua Tagovailoa, who has lost all three career starts against the Bills, but had career highs with 469 yards passing and six TDs against the Ravens.

The Bills certainly took notice of what the Dolphins did by quickly turning their attention to Miami immediately in the aftermath of their win over Tennessee.

“The quickest way to make the playoffs is winning your division,” Allen said. “I know it's early on in the season, but this Dolphins team is playing very good football, and we’ve got to be ready for it.”

Buffalo also will be missing backup offensive lineman Bobby Hart, after he was suspended for one game without pay by the NFL for throwing a punch at a Titans player and instead striking a Tennessee coach in the head following the game. Hart has the right to appeal the suspension.

Same as last week: The Allen to Stefon Diggs connection. Diggs topped his Week 1 production with 12 catches for 148 yards and three touchdowns against Tennessee. Diggs leads the NFL with four touchdown catches, is second with 270 yards receiving behind Hill (284), and second with 20 catches behind the Rams' Cooper Kupp (24).

Statisticians in keeping up with the Bills' third-quarter production against Tennessee, in which Buffalo scored 24 points and forced three turnovers.

Rookie LB Terrell Bernard had three tackles in playing a regular role with Buffalo going with a three-linebacker formation against a power-run team such as Tennessee. The Bills are more accustomed to playing two linebackers against most opponents.

Buffalo is riding a franchise-best seven-game winning streak over Miami since a 21-17 loss on Dec. 2, 2018, and has outscored the Dolphins by a combined 61-11 in its two meetings last year.