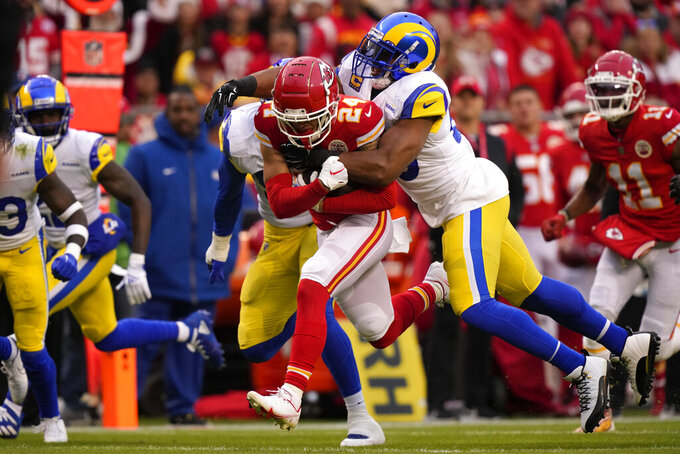 INGLEWOOD, Calif. (AP) — Bobby Wagner was the beating heart of the Seattle Seahawks' defense for a full decade, growing from a hard-hitting rookie linebacker into a six-time All-Pro with a Super Bowl ring and the abiding love of an entire region of football fans.

Wagner's first game against the Seahawks (6-5) in the horned helmet of his hometown Los Angeles Rams (3-8) certainly seems like it would make for an emotionally fraught Sunday afternoon for one of the best defensive players of his generation.

“It’s just another game, just a game coming up,” Wagner said. “We’re playing in our stadium against a team that’s pretty good.”

Yet even by downplaying the magnitude of the Seahawks' visit to SoFi Stadium, Wagner admits he's acknowledging just how much his decade in Seattle meant to him.

“Being a part of that organization, that’s kind of the method,” Wagner said. "You never really make a game too big or too little ... because then it makes you inconsistent. Because you’ll get up for one game, but then you won’t get up for the next game. I’m personally just treating this game like it’s a normal game.”

Wagner built his football foundation with Pete Carroll and the Seahawks, and even their moderately messy breakup didn’t alter his fundamental principles. He was disappointed when he didn't get a call informing him of Seattle's plan to release him, and he wondered if it was because he represents himself — but Wagner says he's over it.

“I am a mature man, and that happened a long time ago,” Wagner said. “I am focused on performing at my best ability against the team that we’re playing this week.”

Wagner, an eight-time Pro Bowl selection, acknowledges he’ll have plenty of pregame reunions with the Seahawks, who still have fond memories of his leadership and contributions. Carroll said the Seahawks "miss everything about him. There’s no replacing him.”

“I watched him on how he was such a professional with how he loved the game, and how he took care of his body, and how he studied all the time,” Seattle receiver DK Metcalf said. “When everybody left the facility, he was still up here studying.”

Wagner and the Seahawks made the playoffs eight times in his first nine years, and he had the first losing season of his NFL career last year when Seattle went 7-10. He's all but certain to have his second amid the Rams' post-Super Bowl free fall, but that hasn't altered his foundation — and he has been an outstanding contributor and leader on Los Angeles' defense, sparking talk of a seventh All-Pro nod despite the Rams' overall struggles.

Seattle has surprised the NFL by getting back in the playoff hunt despite the departures of Wagner and Russell Wilson. The Seahawks need wins to stay in the race, but Wagner hasn't been following their season.

“I have not paid any attention to them, to be honest,” Wagner said. "I was focused on the Rams, because that's what my shirt says at this moment.”

Seattle’s run defense has taken major steps backward in the past two games, capped by Josh Jacobs’ 86-yard game-winning TD run in overtime last week for the Raiders. Seattle gave up 283 yards rushing against Las Vegas. That’s the most under Carroll and the most allowed by the Seahawks since 2000.

“There are still some of the ugly things that got us in trouble in the early part of the year. Those showed back up again, obviously, when it comes to the run-fit issues that we talk about,” Seattle defensive coordinator Clint Hurtt said. “The tackling woes, that’s the part that is the most frustrating, obviously.”

Seven-time All-Pro defensive tackle Aaron Donald will miss the first game of his nine-year NFL career due to injury when he sits out to rest his sprained ankle, but that's only one highlight of the Rams' profound injury woes. Nearly all of the Rams’ top offensive linemen have been sidelined along with quarterback Matthew Stafford and top receivers Cooper Kupp and Allen Robinson. Every Rams game is a golden opportunity for the opposing defense, and the Seahawks are likely to face backup quarterbacks John Wolford and Bryce Perkins behind a patchwork line.

One week after Metcalf tied a career-high with 15 targets and finished with 11 catches, the Seattle star resumes his friendly rivalry with Jalen Ramsey this week. Metcalf has had only two impactful performances in seven career games against LA, twice making two TD catches — but both games were Rams victories.

Seattle has lost two straight games, but the Rams have lost five straight for the first time under coach Sean McVay.

Seattle’s pass rush has gone missing in the past two games. After a four-game span in which Seattle had 19 sacks, the Seahawks have just two in the past two games. Seahawks coaches have noted teams are game-planning more against rushers Uchenna Nwosu and Darrell Taylor, and Seattle now needs to make adjustments to get the pair causing more chaos.