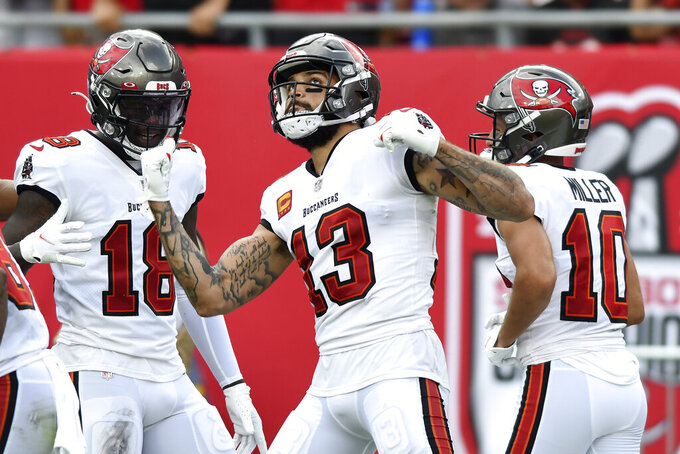 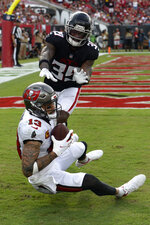 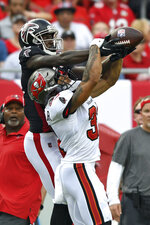 TAMPA, Fla. (AP) — It's good to be 2-0 with a franchise-best 10-game winning streak and an even more impressive run of nine straight 30-plus point performances in a victory.

The defending Super Bowl champion Tampa Bay Buccaneers insist, however, that they still haven't played anywhere near up to their potential after pulling away in the fourth quarter to rout the Atlanta Falcons 48-25 on Sunday.

“I think we’ve got a lot to learn from," coach Bruce Arians said. "It’s always better to learn from winning. I like the way we finished the game.”

Tom Brady threw for 276 yards and five touchdowns, and Mike Edwards returned two of Tampa Bay's three interceptions for TDs as the Bucs scored 30-plus points in a victory for a NFL-record ninth straight time.

The 44-year-old quarterback was also part of teams with New England that scored at least 30 in eight straight wins in 2007 and 2010.

“We were a little loose with the ball. Some penalties at different times that knocked us out of some scoring drives. Some missed throws and missed reads. I certainly wish I had made a few better throws," Brady said.

Brady improved to 9-0 lifetime against the Falcons (0-2), who’ve lost seven in a row going back to last season, with three of those setbacks coming against the Bucs, who’ve outscored their NFC South rivals 124-62 over the past 10 quarters of those outings.

Rob Gronkowski caught a pair of TD passes for the third straight game, including the Super Bowl, as he and Brady continued to climb the career list for regular-season TDs by a passing duo with 88 — one behind Philip Rivers and Antonio Gates for second place. Peyton Manning and Marvin Harrison are first with 112.

Mike Evans also scored on receptions of 3 yards and 1 yard, the latter set up by Shaquil Barrett’s third-quarter interception of Matt Ryan, who fell to 0-6 against teams led by Brady, who rallied New England from a 28-3 deficit to beat Atlanta in Super Bowl 51.

Ryan, who tossed TD passes to Calvin Ridley and Cordarrelle Patterson before running for a 2-point conversion to trim an 18-point deficit to 28-25 late in the third, threw a pair of interceptions that Edwards returned for fourth-quarter TDs that broke the game open.

“These guys kept coming back, back, back,” Arthur Smith, Atlanta's first-year coach said. "It’s a shame. You get in there, it’s a three-point game and then it ends the way it does.

“When the score got out of hand, a lot of that was on the offense, right? You can almost put four of those touchdowns — two of them for sure, pick-6′s (on the offense),” Smith added. "Everybody feels sick when you see that box score, but there were some positives.”

Since trailing the Falcons 17-0 at halftime of their Week 15 meeting in Atlanta last December, Brady has thrown for 11 touchdowns vs. one interception in guiding the Bucs to three victories in a series that’s seen Tampa Bay win four of the past five meetings.

Gronkowski, who spent nine seasons with Brady in New England before coming out of retirement to rejoin his long-time teammate with the Bucs last year, scored on receptions of 20 yards and 1 yard in the first half.

Brady’s fifth TD pass — a 12-yarder to Chris Godwin with just over nine minutes remaining, put the Bucs over 30 points for a ninth straight game. Edwards scored on interception returns of 31 yards and 15 yards to finish the rout.

Brady completed 24 of 38 passes without an interception. He was sacked three times, losing a fumble on one of them.

Ryan finished 35 of 46 for 300 yards, two touchdowns and three interceptions.

“Got it to a three-point game, and we had some momentum, really did. Credit to them, they changed the tide," Ryan said. "They did a good job in the fourth quarter putting us away. I think there’s things we can improve, there’s a lot of things we can correct.”

Former Bucs defensive coordinator Monte Kiffin was inducted into the team’s Ring of Honor during a halftime ceremony.

Kiffin, credited with being architect of the Tampa-2 scheme, led the Tampa Bay defense for 13 seasons from 1996 to 2008. He joins four defensive stars from the 2002 Bucs, who won the Super Bowl — Derrick Brooks, Warren Sapp, John Lynch and Ronde Barber — as members of the Ring of Honor at Raymond James Stadium.

Buccaneers: CB Carlton Davis III played after being listed as questionable with a sore hamstring. ... WR/KR Jaydon Mickens left with a hip injury in the second half.

Falcons: Will try to break a seven-game skid at the New York Giants next Sunday.

Buccaneers: Travel to the West Coast to face the Los Angeles Rams on Sunday in the first of two straight road games. Brady returns to New England to face the Patriots for first time the following week.