Broncos' awful starts, inability to get stops a losing mix 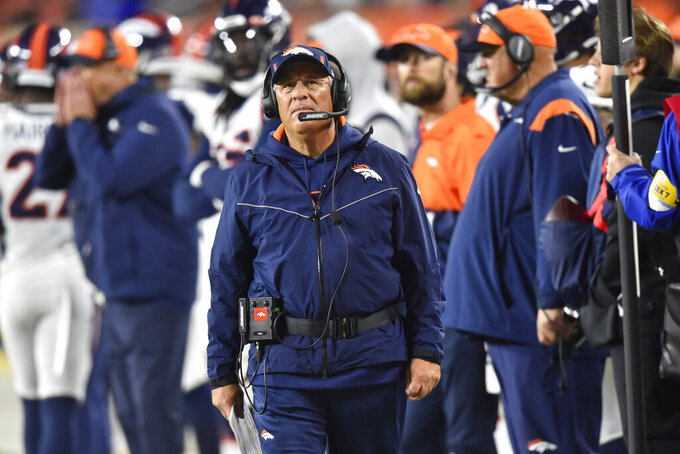 Denver Broncos coach Vic Fangio looks up during the first half of the team's NFL football game against the Cleveland Browns, Thursday, Oct. 21, 2021, in Cleveland. (AP Photo/David Richard)

ENGLEWOOD, Colo. (AP) — So much for Vic Fangio's spectacular September. If the Broncos don't beat Washington on Halloween, Denver will be 0-for-October for the first time since 1967 under Lou Saban.

Fast starts and timely stops are eluding the Broncos (3-4), a malignant mix that's turning 2021 into another slog through mediocrity that’s come to define the franchise in its post-Peyton Manning era.

Just 25 days after starting 3-0, the Broncos fell under .500 with their fourth consecutive flop, a 17-14 loss to the Cleveland Browns' bevy of backups Thursday night.

Their sins are so familiar: sputtering starts by Pat Shurmur's predictable offense, which has managed a single TD drive in his 23-game tenure as Broncos play caller, and big breakdowns by Fangio's defense, the league's highest paid.

The Broncos had just two first downs, 76 yards of offense, were 0 for 4 on third downs and had the ball less than nine minutes in the first half against the Browns. They trudged to the locker room trailing by double digits for the fourth consecutive game.

“What's most concerning is our fundamentals were lacking in that game, particularly on the defensive side of the ball. And when that's lacking, that's poor coaching on our part,” Fangio said Friday. “And that starts with me. We've got to do a better job of getting the fundamental things taught and executed.”

The Broncos have been routed by the Ravens, pummeled in Pittsburgh, embarrassed by the Raiders and bullied by a Browns team missing most of its playmakers.

Despite pointing his thumb at himself for this mess, Fangio, who is 15-24 as Denver's head coach, said he's not fretting over his job.

“I'm not worried about my coaching status," Fangio said. "What I'm worried about is this team and doing anything and everything we can to get our guys coached up to play better. And that's my only focus.”

Defensive end Shelby Harris insisted it was a one-off performance.

For Denver, not very well. The Broncos have had four bad games in a row.

When they needed a stop on third-and-7 to get the ball back one last time Thursday night they allowed D’Ernest Johnson to gain 8 yards. That was the capstone to a breakout performance from the third-stringer who rumbled over the Broncos for 146 yards with stars Nick Chubb and Kareem Hunt sidelined.

After pulling within three, the Broncos couldn't stop the Browns, who ate up the final 5:17.

Don't give up on them just yet, admonished Von Miller, who sat out the second half with a sprained left ankle.

“We’ve got great players and great coaches,” Miller said. "I feel comfortable with the direction we will go in for the rest of the season.”

Harris keeps proving he has the best hands on the team with yet another blocked field goal try.

The inside linebacker position, which has been hit by an injury epidemic. Starters Josey Jewell and Alexander Johnson are out with season-ending torn chest muscles. Johnson's replacement, Micah Kiser, went out in the first half at Cleveland with a groin injury. His replacement, undrafted rookie Curtis Robinson, is dealing with wrist and thumb injuries.

The profusion of soft tissue injuries puts the spotlight on head strength and conditioning coach Loren Landow and his training methods, which will come under scrutiny with Fangio's self-scouting during this mini-bye weekend.

“Yeah, we look at everything,” Fangio said to reporters. “As you guys know, we took a deep dive on the injuries this offseason. We've done anything and everything we can to mitigate injuries. We haven't mitigated them enough, obviously. But we do look at it constantly, yes.”

WR Jerry Jeudy. He was medically cleared to return from the high ankle sprain he sustained in the opener, but he'll make his return next weekend instead.

“He wanted to play,” Fangio said. “We didn't think it was prudent to play him with no practice.”

QB Teddy Bridgewater. Injuries have rendered him ineffective, as has Shurmur putting him in the shotgun so much this month. He threw an interception in the end zone that game announcers Troy Aikman and Joe Buck blamed on his injuries, which they suggested kept him from being able to step into his long throws.

Fangio wasn't buying it, saying the safety made a good play on a risky throw.

In addition to the attrition at inside linebacker, oft-injured NT Mike Purcell might need surgery for a thumb injury. Fangio said Purcell will wear a cast whenever he returns.

Fangio had no update on Miller's sprained left ankle but said, “I think the next four or five days will tell us exactly where he's at.”

The players are off until Tuesday.

39 - the takeaways in 39 games for the Broncos under Fangio, whose last Chicago Bears defense had 36 takeaways in 2018 alone.

The Broncos have the weekend off before hosting Washington (2-4).