Broncos back Royce Freeman adds valuable skill to his game 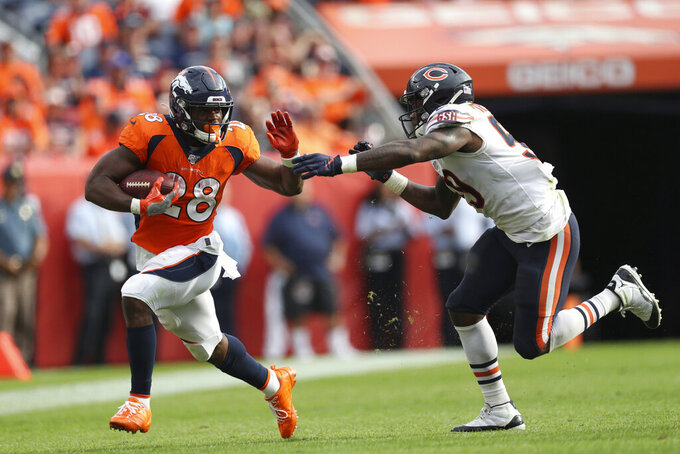 Denver Broncos running back Royce Freeman (28) tries to stiff-arm Chicago Bears inside linebacker Danny Trevathan (59) as Freeman carries the ball in an NFL game against the Chicago Bears, Sunday Sept. 15, 2019, in Denver. The Bears defeated the Broncos 16-14. (Margaret Bowles via AP) 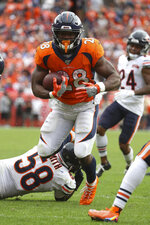 Yet, Freeman isn't just blasting through the beefy lineman and freeing up Lindsay to slip out of the backfield to catch passes away from the trenches where he can square off against D-backs more his size.

Both Freeman and Lindsay have 53 yards receiving so far and Freeman is averaging 8.8 yards a catch to Lindsay's 6.6. (He's also averaging 5.2 yards a rush to Lindsay's 3.3).

These are the early returns on Freeman's offseason quest to remake his game after injuries limited the Oregon Ducks' career rushing leader and third-round draft pick to eight starts as a rookie. That cleared the way for Lindsay , who starred at Colorado, to get more work and emerge as the first undrafted offensive rookie to make the Pro Bowl.

Freeman's goal: to join Lindsay and the rest of the NFL's new breed of versatile running backs accessorizing offenses, confusing defenses and increasing their value to both their team and their bank accounts.

It's paying off for Freeman and the Broncos (0-2), who visit the Green Bay Packers (2-0) on Sunday in search of the franchise's 500th victory and coach Vic Fangio's first.

"I think everyone thought Phillip was that guy, that dynamic guy," offensive coordinator Rich Scangarello said. "But the thing about Royce is he's instinctive. He doesn't need a lot of reps to learn. So, even though he's a little bit bigger, he's really got a good feel for the pass game."

Turning running backs loose in space is another of the college spread concepts that have permeated the pro game in recent years, and the Broncos now have two of these versatile running backs to rotate and keep defenses off-balance.

"The whole goal is to get guys involved in space and let them be dynamic in that area," Scangarello said. "Royce has the ability to be a complete player: a protection back, a runner and a pass-catcher and when you find that you're lucky to have that."

Scangarello saw the blossoming of the versatile running back who takes less of a pounding at the line of scrimmage and gets to display his athleticism in open space.

"For us it was in 2015 with the Falcons, I think Kyle Shanahan realized with Devonta (Freeman) what it brought to the table and it evolved into where it is today and it's continued to grow," Scangarello said. "Those little epiphanies at times in your career as coordinators and coaches can take you in a whole other direction. And that's kind of what's happened for us.

"And then you start looking for those traits in your players," Scangarello said. "We're fortunate to have those guys."

Being a hybrid running back means more touches but less wear and tear.

"I mean, it's easier to catch the ball out in space on a safety than it is to run between the tackles sometimes," Scangarello said. "Those guys, they terrify defenders in space because they know if they miss a tackle, it's an explosive play. Yeah, I do think there's a hidden benefit in getting them touches where they're not getting banged around and you can increase their value and ability to have success in the offense."

For Freeman, the benefit of being more versatile is getting more playing time.

"It's just important for a back in general to try to be as close to an every-down back as possible," he said. "I want to do it all."

When the NFL joined the college game in emphasizing the pass, running backs were devalued in the draft. Then came the likes of Christian McCaffrey and Saquon Barkley. Two-time rushing champion Ezekiel Elliott 's value skyrocketed after he caught 77 passes last season (he averaged 29 his first two years), and he signed a $90 million contract extension with the Cowboys.

"You look across the league and I think it would be foolish not to pick up on things that other great backs are doing," Freeman said.

Notes: WR Courtland Sutton (ribs) returned to practice Friday. ... GM John Elway said the NFL acknowledged the officials were "dead wrong" to flag OLB Bradley Chubb for roughing the QB that helped put the Bears into position for the game-winning field goal last weekend. Elway also said during a public business appearance that he feels better at 0-2 this season than he did last year at 0-2 because he trusts Fangio and QB Joe Flacco. ... ILB Todd Davis is expected to make his 2019 debut Sunday.