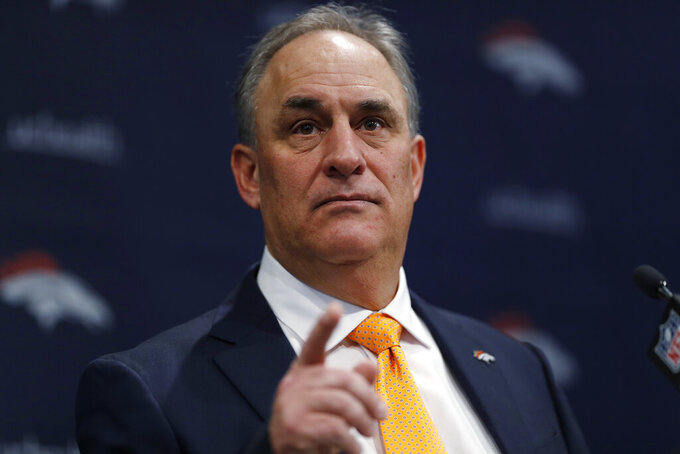 FILE - In this Thursday, Jan. 10, 2019 file photo, Denver Broncos new head coach Vic Fangio speaks during a news conference at the team's headquarters in Englewood, Colo. The Denver Broncos have plucked another assistant coach off the Chicago Bears staff and they might not be done. New head coach Vic Fangio hired outside linebackers coach Brandon Staley to a similar role in Denver. And Fangio is interviewing Ed Donatell for his defensive coordinator job in Denver after Donatell spent four season as Bears defensive backs coach while Fangio was Chicago’s defensive coordinator.(AP Photo/David Zalubowski, File)

ENGLEWOOD, Colo. (AP) — New Broncos coach Vic Fangio isn't just bringing his defensive philosophies from Chicago. He plucked outside linebackers coach Brandon Staley off the Bears' staff for a similar role in Denver, and then brought secondary coach Ed Donatell over to serve as his defensive coordinator.

Donatell has spent the last four seasons as the Bears' defensive backs coach, coinciding with Fangio's stint as Chicago's defensive coordinator before his hiring in Denver last week. He spent the four seasons before that doing the same for Fangio in San Francisco.

A former defensive coordinator in Green Bay and Atlanta, Donatell has twice coached the secondary in Denver, first for Mike Shanahan from 1995 to 1999 and again for Josh McDaniels in 2000.

"Ed's been an integral part of top-10 defenses for six of the last eight seasons in two different places, and he's a great fit to be our defensive coordinator," Fangio said Tuesday night. "Having worked very closely with him for a number of years, Ed has a strong understanding of the entire defense from the front end to the back end with the defensive backs being his specialty.

"He's a very good teacher and believes in the fundamentals in the classroom and on the field."

Fangio, however, will make the defensive play calls himself.

Scangarello (scain-guh-REL-oh) would seem a good fit for an offense that general manager John Elway declared needs to modernize to keep up with teams around the NFL who are all-in on the run-pass option, among other innovations.

Staley, 36, goes from having Khalil Mack as his prized pupil to tutoring Broncos star Von Miller .

Mack had 12 1/2 sacks and six forced fumbles in helping the Bears (12-5) qualify for the playoffs for the first time in eight years despite missing all of training camp before the Raiders traded him to Chicago just before opening weekend.

Miller posted 14 1/2 sacks last year and teamed with rookie Bradley Chubb (12 sacks) to form the NFL's most potent pass-rushing duo. Fangio and Elway have said they believe Miller can get even better.

Playing with a lead would go a long way in that quest. The Broncos (6-10) were awful under offensive coordinator Bill Musgrave last year, punting on their opening drive in each of their last nine games.

Neither Musgrave nor defensive coordinator Joe Woods will return in 2019. Special teams coordinator Tom McMahon is expected to have the same role when Fangio finalizes his coaching staff.

The Broncos didn't technically have an outside linebackers coach last year despite having three first-round picks at the position in Miller, Chubb and Shane Ray. Former Cowboys and Broncos star DeMarcus Ware was a volunteer coach for the edge rushers but he missed long stretches of the season while competing on "Dances with the Stars" last fall.