Broncos' new linebackers aim to get up to speed quickly 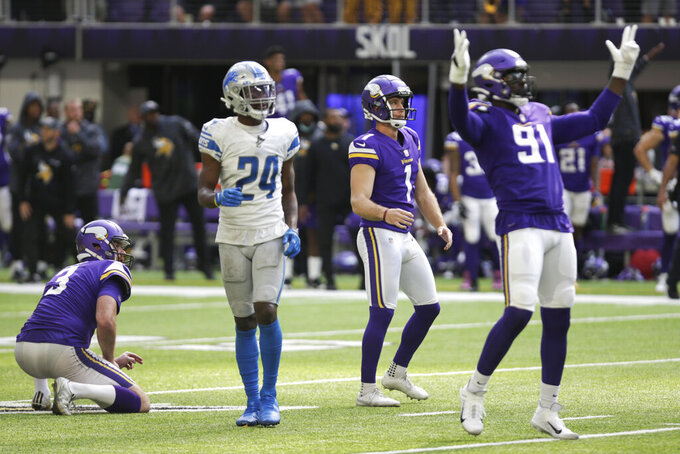 ENGLEWOOD, Colo. (AP) — The Denver Broncos are trying to get their two reinforcements for their obliterated linebacking group up to speed — and fast — so they can play Sunday against Washington.

The Broncos acquired pass rusher Stephen Weatherly from the Vikings and inside linebacker Kenny Young from the Rams over the weekend, swapping draft picks and taking on a total of $2.25 million in remaining salary for the pair.

Additionally, some of their backups are ailing with outside linebacker Andre Mintze (hamstring) and inside 'backers Micah Kiser (groin, IR), Curtis Robinson (wrist, thumb) and rookie Baron Browning (concussion) all hurt. Robinson was waived Tuesday.

Weatherly arrived Monday and Young got to Denver on Tuesday just before practice.

Getting players acclimated midstream is a tall task, coach Vic Fangio said, adding “it would be a total guess” to say they'll both be ready to play this weekend.

“Yeah, it's tough. Obviously, you overdose on meeting time. The practice time is what it is. And they just have to do a lot of work," Fangio said.

"They're going to have to do a lot of work at home on their own with the iPads. The good thing about these cell phones and texting, you can text a question to a coach at any time. You can video a play and ask a coach a question. Coach can do the same to them.

"So, it's just a lot of extra work, and it's more mental than physical. We'll give them as many reps in practice as we can. But it's not an easy chore.”

Weatherly concurred, saying, “It's definitely between the ears at this point.”

“That's what this whole week of practice is for,” Weatherly added. "I need to first go out there at practice and show the coaches that I have an understanding of the playbook. After that, it's a really important step to earn the trust of the guys on the field. If the other 10 guys don't trust you're in your gap to do your assignment, then they're going to hesitate to do their job.

“So, this whole week is about showing the coaches that I understand it and proving to my brothers that I can go out there and you don't have to worry about me if my number's called.”

Weatherly said he was especially eager to learn from Miller just as he gleaned tips from Danielle Hunter and Everson Griffen in Minnesota.

“Luckily, there was a spot in the OLB room right next to him, so I snagged that,” Weatherly said. “I just want to be a sponge.”

Weatherly was playing sparingly at defensive end for the Vikings after re-signing with them this year, behind Hunter, Griffen and D.J. Wonnum.

Young is also in the final year of his rookie contract that’s paying him $2.183 million this year, and his departure means more playing time for Rams third-round rookie Ernest Jones.

Unlike Weatherly, Young wasn't buried on the depth chart. He was a key defensive playmaker for the Rams (6-1), having started all seven games and he ranked second on the team with 46 tackles, including a team-best six for loss in his breakthrough fourth NFL season.

“He's athletic, he's a playmaker, he's good in coverage, has good instincts," Fangio said. “You know he's been a good player for them.”

The Broncos also are expecting some help for their ailing offense this week. Wide receiver Jerry Jeudy, their first-round pick in 2020, is back from a high right ankle sprain he suffered in the opener.

Jeudy was cleared last week, but Fangio wanted to see him in practice before activating him for a game. He said he'll be watching him this week to "see that he's normal. I mean, I know what Jerry looks like normal. And if that's what we see, he's good to go.”

Jeudy was injured in the opener against the New York Giants after catching six passes for 72 yards.

“Anytime you can put another good receiver on the field, it helps everybody. It just does,” Fangio said. “... Everything has a domino effect in this game.”