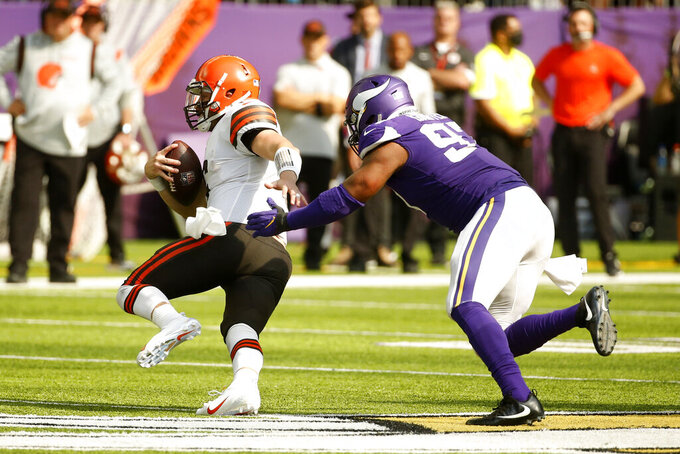 BEREA, Ohio (AP) — Baker Mayfield's throws were either too high, too low or too far off target on Sunday against Minnesota.

“Terrible,” Mayfield said of his performance.

He finished 15 of 33 for 155 yards and missed on some potentially big plays, including a game-sealing touchdown pass to Odell Beckham Jr. that instead became another confounding incompletion.

Mayfield's poor outing in Cleveland's 14-7 win over the Vikings raised familiar questions about his chemistry with Beckham and new concerns about whether he's being affected by an injury to his left, non-throwing shoulder, which he hurt while making a tackle on Sept. 19 against Houston.

Mayfield acknowledged Wednesday that he's been wearing a shoulder harness, which stabilizes the AC joint and gives the Browns quarterback some security in case he takes another big hit. Mayfield said his shoulder had popped out.

He was asked if the harness was affecting his throws.

“It shouldn't, no,” Mayfield said tactfully.

That doesn't mean that it's not hindering him or that he's not playing with some discomfort, which could impact his throwing ability. Browns coach Kevin Stefanski said earlier this week based on what he's seen in practice that Mayfield is fine, and the team hasn't listed him on its injury report the past two weeks.

However, the severity of Mayfield's shoulder strain is unknown, and it could help explain why he went from leading the NFL with an 81.6% completion rate after two weeks to 65.5%, dropping him to 18th overall.

Whatever the reason, Mayfield knows he has to do better.

"It’s just about making the plays when they’re there,” he said before practice. “I really don’t think it’s that complicated. Everybody’s going to try and make an excuse. I pretty much hit on it after the game, just gotta make the damn play.

Every quarterback has an off-day, but this one seemed extreme for Mayfield, who has been pinpoint with most of his throws this season.

He mentioned two overthrows — one to Beckham in the end zone and another to tight end Harrison Bryant — against the Vikings as plays he's like to do over.

“Just have to hit those,” he said.

Stefanski did his best to protect Mayfield following Sunday's game by saying he needed to call better plays for his QB. And as the Browns prepare to visit the Los Angeles Chargers this week, Stefanski remained in Mayfield's corner.

“You can always point your finger at a few things,” he said when asked about Mayfield's many misfires. "But we missed a couple of guys, and we are going to work really hard to make sure we hit them this week.

"I have seen Baker have great success in games, and I have no doubt that we will work at it this week.”

Perhaps the worst moment of Mayfield's day came in the fourth quarter when he missed an uncovered Beckham streaking down the right sideline. Mayfield said it was both a timing and communication issue with OBJ, who was playing just his second game since returning from knee surgery.

It was another chance for the two to connect, but they didn't.

And while Twitter timelines across Cleveland filled with vicious and positive comments about him, Mayfield, said he's already turned the page and moved on to the Chargers.

That's what his teammates expected.

“It’s Baker," running back Nick Chubb said. “We all trust in him. We’ve all been there. I’ve been there plenty of times. It’s just about the bounce back, which he always has and so I know we all trust in that and believe in him.”

NOTES: Cleveland's defense is dinged. DEs Jadeveon Clowney (elbow) and Takk McKinley (ankle/knee)) CB Denzel Ward (neck), nickel back Troy Hill (toe) and LB Malcolm Smith (abdomen) all sat out Wednesday with injuries. Stefanski ruled out rookie CB Greg Newsome (calf) for the second week in a row. ... Also, star DE Myles Garrett and DT Malik Jackson were given the day off to rest. ... Rookie LB Jeremiah Owusu-Koramoah has gotten rave reviews from the outside for his performances the past two games. However, the second-round pick is tuning them out and listening to his coaches. "I still have things to work on and still looking for things to correct, smaller details and things,” he said. “Am I playing well? Not necessarily in my eyes. I could do better.”