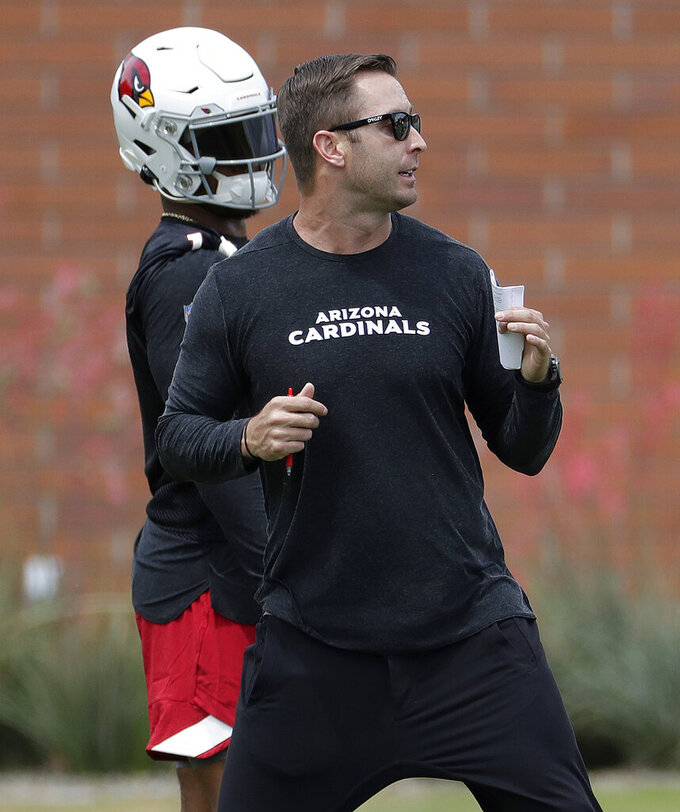 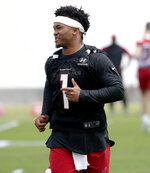 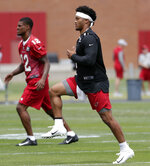 TEMPE, Ariz. (AP) — The Arizona Cardinals' rookies took the practice field for the first time on Friday, and all eyes were on quarterback Kyler Murray.

Murray, the top overall pick last month in the NFL draft, sported a white tie-on headband as he threw over the outstretched arms of coach Kliff Kingsbury and looped on-target fade-route passes to receivers during the 25-minute window in which practice was open to media.

Afterward, he was walking somewhat gingerly.

"My feet hurt," Murray said. "It's been a long time since I put cleats on."

As it turned out, Murray had to wear new cleats while he waits for his custom footwear to get to him. Still, he completed his first team practice with his new teammates and NFL newbie Kingsbury.

Murray has familiarity with Kingsbury's wide-open offense, which plays to his athleticism and the systems in which he's played in high school and college. Murray said that showed right away.

"Obviously, it's only Day 1, but I can already feel the rhythm going. Hopefully we can keep this thing going and do something great," Murray said. "I was pretty comfortable, surprisingly comfortable as far as communication and stuff like that. It's pretty similar. I think that's helped me out a lot."

Kingsbury said Murray "can really throw it" and has "got a presence about himself, so I liked how he operated." Kingsbury focused much of his attention on Murray in the first practice.

"It's always been hands-on for me. I'm going to be involved in coaching the quarterbacks as long as I'm a coach," Kingsbury said. "I do think there's a comfort level there."

Arizona signed the 21-year-old Heisman Trophy winner to a four-year contract Thursday worth about $35 million, with a team option for a fifth year. The contract includes a signing bonus of more than $23 million.

"It's obviously a great day for me and my family," Murray said about signing the contract.

Big money aside, Murray said he feels like another rookie learning an NFL system along with everyone else on the field for the three-day mini-camp this weekend at Cardinals headquarters.

"I really just feel like a normal guy," Murray said. "We're all here to work hard and get better."

Cornerback Byron Murphy, the Cardinals' first second-round draft choice, said Murray is a good guy, a great leader, and that he looks forward to seeing his teammate make plays.

Wide receiver KeeSean Johnson, a sixth-round pick, said Murray showed leadership in the huddle from the very start of practice. And he was impressed with Murray's arm.

Murray admitted he didn't initially believe that Cardinals general manager Steve Keim made him the team's starting quarterback for the regular-season opener in September. But when Keim told him in person, it was real.

As for the shoes, Kingsbury had to answer a question regarding his level of concern for his high-profile quarterback's foot soreness.

"I think he'll be all right," Kingsbury said. "I guess the cleats he wanted didn't get delivered. But we'll try to get those here tomorrow."

NOTES: Kingsbury said he isn't sure veteran CB Patrick Peterson will report to the team for veteran offseason workouts later this month, which are voluntary. Peterson appeared unhappy with the team in social media posts last month, but the Cardinals have indicated they don't intend to trade the eight-time Pro Bowler. ... The Cardinals signed the remaining five members of their 2019 draft class that hadn't done so on Thursday. WR Andy Isabella (second round), WR Hakeem Butler (fourth round), S Deionte Thompson (fifth round), OL Lamont Gaillard (sixth round) and DL Michael Dogbe (seventh round) signed Friday. ... Twenty-eight players on the roster for the weekend minicamp are listed as tryouts.

By Dennis Waszak Jr. 46 minutes ago
an hour ago
By Kyle Hightower an hour ago
By Schuyler Dixon 2 hrs ago
By Noah Trister 3 hrs ago