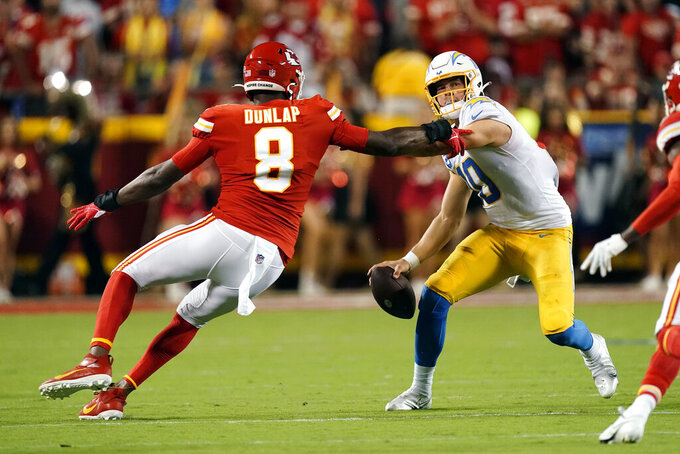 Coach Brandon Staley said a CT scan Friday morning confirmed the injury. Staley said the third-year quarterback is day-to-day and that his status will be evaluated again on Monday. The Chargers (1-1) don't return to the practice field until Wednesday, when they will begin preparing to host Jacksonville on Sept. 25.

“I think we got good news in terms of what the CT scan showed. You don't want it to be a fracture of the bone. So the fact that it’s cartilage was a good sign,” Staley said. “It's going to come down to comfort. Let the weekend calm down and then when we get into game week we'll have a better sense of how he's feeling.”

Herbert completed 33 of 48 passes for 334 yards with three touchdowns and an interception. He missed only one play after taking a hard hit from Kansas City defensive lineman Michael Danna on 12-yard completion to Gerald Everett with five minutes to go.

“Nobody cares about Justin more than I do. It’s a tough game, and as long as he feels like he can go in that moment, then that’s what we’re gonna roll with,” Staley said. “I think he did a good job of protecting himself. I think what you saw is that he’s a really smart player. He’s not gonna put himself at risk in that moment, not going to take one more extra hit than he needs to.”

Punter JK Scott has been an underrated new addition. Scott pinned the Chiefs inside their 20-yard line three times on Thursday while the coverage unit allowed only 6 yards on a pair of returns. Scott's four punts inside the 20 through two games is tied for the second-most to start a season in franchise history.

The running game is stuck in neutral. Of the Chargers' 55 rush attempts the first two games, 15 have gone for no gain or negative yards and only one has gone for 10 yards or more. Austin Ekeler is averaging 2.7 yards per carry, and has struggled when trying to run outside the tackle box. Ekeler has been stopped for no gain or has lost yardage on seven of his 28 carries.

Mike Williams was held to two fourth-quarter catches in the opener, but had a pair of receptions on the opening drive and finished with eight receptions for 113 yards, including a one-handed touchdown catch in the third quarter. Williams is the only visiting player in the 50-plus seasons of Arrowhead Stadium with three straight games of at least 100 receiving yards and a TD.

It was not a great night for guards Matt Feiler and Zion Johnson. According to Pro Football Focus, Feiler allowed four quarterback pressures and five hurries, making it his worst game in his two seasons with the Chargers. Johnson ended up being beat by Danna on the play where Herbert got injured.

Center Corey Linsley (knee) and right tackle Trey Pipkins (lateral foot sprain) are day to day. Staley said both players will be assessed on Monday and could return to practice later in the week.

4 — Times Herbert has thrown a pick-6 since the start of last season, which is tied with the Rams' Matthew Stafford for most in the league.

The Chargers, who are 1-1 for the fifth straight year, play their next six games against opponents that did not post a winning record last season.