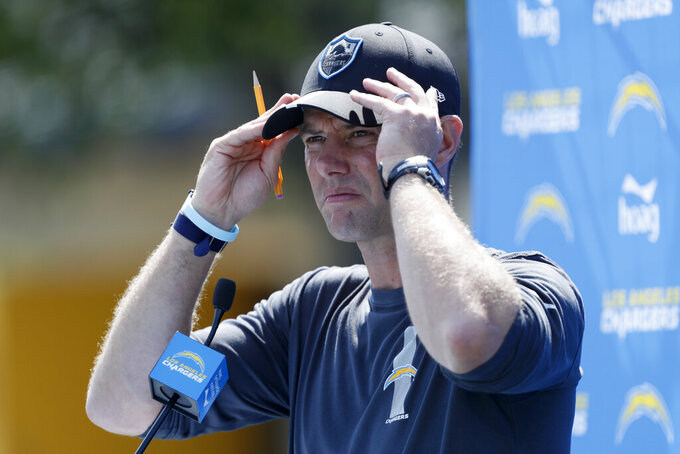 COSTA MESA, Calif. (AP) — How much the Los Angeles Chargers' revamped offensive line has improved remains one of the biggest questions heading into the regular season. But fans won't see the entire group play together until the Sept. 12 opener at Washington.

Coach Brandon Staley said Thursday that quarterback Justin Herbert and most of the established veterans will not play during the three preseason games. Left tackle Rashawn Slater, the 13th overall draft pick, is expected to be the only starting offensive lineman to play Saturday against the Los Angeles Rams.

“Next week, we get a chance to play against San Francisco in these (joint) practices. That will be much more like a game than any of these preseason games would be," Staley said. "We can create those game-like situations where those guys can figure things out together. That’s a big hallmark of how we want to do things so that we can keep those guys out in the preseason.”

Slater, who has not played since Nov. 30, 2019, at Northwestern, and the rookies will get plenty of action in their first preseason game. Slater said the last couple of weeks when they have been in pads have been a good opportunity to knock off some of the rust while trying to hone his technique in one-on-one matchups.

"It’s definitely been an opportunity to learn really quickly. There’s still a long way to go, but I feel good about where I’ve started,” he said.

Staley already knows what he has in right tackle Bryan Bulaga, right guard Oday Aboushi, center Corey Linsley, and left guard Matt Feiler. They have combined for 302 regular-season starts, which is why Bulaga is also not concerned that they will be ready as a group for Week 1.

“It’s always helpful when you get guys that get brought in that are veterans,” he said. “They played a lot of ball and they’ve been on good teams. When you have that knowledge, that chemistry is a lot easier to build because guys know what it’s supposed to look like.”

The Chargers had one of the league's worst offensive lines last season as Herbert was constantly under pressure. Bulaga is the only holdover among the starting group, with Linsley, Aboushi and Feiler arriving via free agency.

Bulaga, though, missed seven games due to a back injury and saw fewer than 20 snaps in four others. However, he feels like the offseason program and some veteran days off during the first couple weeks of camp should help him get prepared.

“When the back injury happened, it was a nick in my season because I didn’t have any experience with how to bounce back from that," he said. "It is something that the training staff and Brandon are aware of it. Backs can pop out on you like that, and it’s something that we are very aware of and continuing strengthening to make sure that that part of my body stays fresh”

If Bulaga is injured again this season, Feiler can move over to tackle. Fifth-round pick Brenden Jaimes could bid for time at one of the guard spots.

All-Pro Linsley, who left Green Bay to become the highest-paid center in the league, said the communication between all the linemen has been good so far.

“I feel like the culture here, at least from what I’ve experienced, is phenomenal," he said. "We’ve all played a lot of ball so we’ve all kind of gotten, not set in our ways, but we’ve done things a certain way. For us to be able to move within that space of how to do it, that’s given me so much confidence in us.”