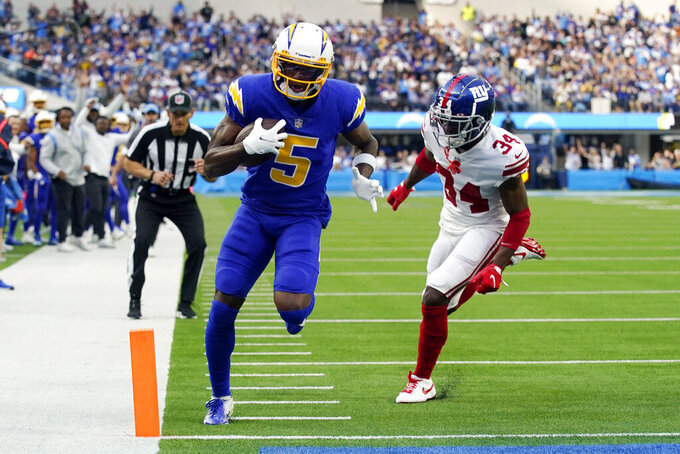 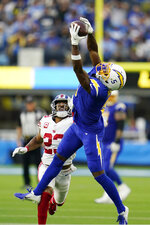 Joshua Palmer and Jalen Guyton have shown the ability to match Herbert on the practice field, and the wide receivers were able to carry it over into Sunday's game.

With veteran Keenan Allen on the COVID-19 list, Palmer and Guyton stepped up in the Chargers’ 37-21 win over the New York Giants.

“So I’m really proud of both of those guys because Justin’s a real hard guy to compete with. You know, he really is, and so I’m excited about all those guys,” coach Brandon Staley said.

Palmer essentially filled Allen's role as he made five receptions for 66 yards and a touchdown. The third-round draft pick from Tennessee lined up in a variety of spots, often working out of the slot where Allen does most of his damage.

On Herbert’s first of three touchdown passes, Palmer was on the inside of two receivers lined up to the right of the hashes. He caught an out route before cutting it up the field for a 12-yard score, demonstrating the patience required in that position.

“I’m getting more comfortable every time I do it. It’s the first time I ever had to do it,” Palmer said. “Keenan just tells me to slow down. There’s a lot more things you have to see in the slot, so just take your time. You don’t have to rush.”

After seeing Palmer thrive with the biggest workload of his rookie season, Staley expects the Chargers (8-5) to be even more versatile in how they use their receivers.

“That’s what I really loved about the guy was he can beat press outside, but inside, he can run that slot route tree. ... He’s got that type of feel, those instincts,” Staley said. “So the fact that we can move him around allows Mike (Williams) and Keenan, for us to play that chess match with them. And the thing about the guy is he can get deep.”

Stretching the field has never been a problem for Guyton, who got behind two Giants for a back-breaking 59-yard touchdown reception with 17 seconds left in the first half that put the Chargers up 24-7.

In his second season from North Texas, it was Guyton’s fourth career touchdown catch of at least 40 yards and second in as many weeks.

Herbert credited Guyton, who had three receptions for 87 yards, for how he attacked the safeties in a cover-2 scheme, while everyone else praised a throw that traveled more than 60 yards in the air.

“The kid has arm talent and ripped it down the middle,” Giants safety Logan Ryan said. “The ball just carried. It was 59 on a rope.”

“Well, when you see something special, normally it looks easy,” Staley said. “That’s what he does is he makes the really, really challenging stuff look easy, and that’s a pretty good indicator that you’re witnessing something rare.”

But it’s more than talent, Staley said. The extra time Herbert spent with Guyton and Palmer after practice allowed those plays to happen.

“What that allows Justin to do is feel like, ‘Hey, I can throw it to this guy when it’s tight because I’ve got the time on task with them,’” Staley said.

The return of explosive pass plays the past two weeks has helped revive the Chargers' offense following a midseason lull, and Staley sees continued involvement from Palmer and Guyton as a way to keep generating them.

“I think when you have your young receivers, when you have Josh and Jalen play like that, it gives you a lot of confidence because we have established products with Mike and Keenan. You have kind of an established product with (tight end) Jared Cook, you kind of know with (running back) Austin Ekeler, those guys are proven commodities in this league,” Staley said.

“But for those two young guys to catch the football … that’s how you want to play offensively.”