Chargers' Pipkins turns it around to win right tackle job 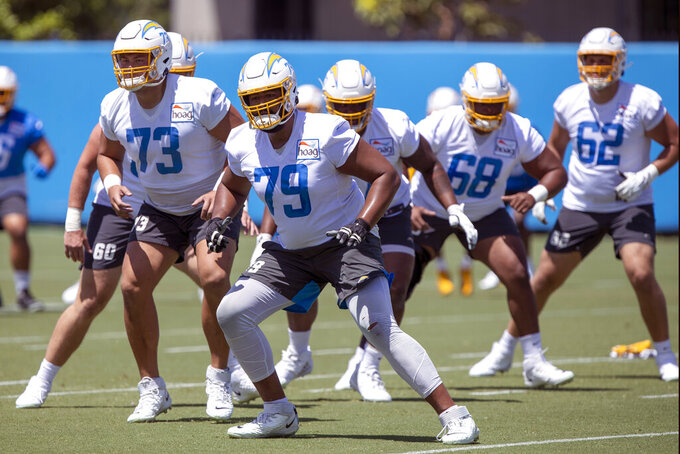 COSTA MESA, Calif. (AP) — One year ago, Trey Pipkins III was struggling to maintain his place on the Los Angeles Chargers' roster.

Today, he is their starting offensive right tackle.

Pipkins' progress over the past year and consistent training camp helped him win the starting spot over Storm Norton going into the regular-season opener against the Las Vegas Raiders on Sept. 11.

“I’m really proud of Trey. He deserves full credit because he’s the one that invested so much in his game,” coach Brandon Staley said. “His coaches, his teammates on the O-line, have really helped him get to where he’s at today.”

Pipkins is finally showing why he was only the second player drafted out of Sioux Falls when the Chargers took him in the third round in 2019. He beat out Norton, who started 15 games at right tackle last season after Bryan Bulaga suffered a season-ending back injury during the first half of the opener.

Pipkins and Norton both got plenty of snaps during the preseason, but Pipkins ended up getting more with the first team, especially the last two weeks of training camp.

“A lot of validation. I don’t know if validation in myself, but more that it felt good to get the belief of everybody around me," Pipkins said about winning the starting job. "That was a cool experience, just to put that work in and come back and have people see it, respect it, things like that.”

Pipkins — who has appeared in 38 games with 10 starts — began turning things around late last season. After struggling as an extra lineman in jumbo packages the first six games, he was inactive for four straight games.

When Rashawn Slater landed on the COVID-19/reserve list before a Week 15 Thursday night game against Kansas City, Pipkins stepped in and had one of the better games of his career. He didn't allow a quarterback pressure two weeks later in a start at right tackle against Denver.

Offensive coordinator Joe Lombardi also noticed a difference in Pipkins after being benched.

“We saw him perform in a consistent fashion and a successful fashion," Lombardi said. "I don’t know if I saw it right away, because we’re back in practice and it’s not the same kind of evaluation. But then when he went into the games and played well, I think we saw like, ‘Hey, this guy has grown up a little bit.’”

During the past offseason, Pipkins went to Dallas and worked with offensive line coach Duke Merriweather, who works with a number of NFL linemen, including Slater.

Pipkins said his biggest areas of improvement after working with Merriweather was his sets in pass protection and where he places his hands in run-blocking.

“There have been a lot of different areas. I think just in the technical side of my game, there’s just so much more that I’ve learned and so many big things that I’ve added to my game that have helped me a ton,” Pipkins said.

Pipkins' progress is also a positive note for a 2019 Chargers draft class that hasn't made much of an impact. Defensive tackle and first-round pick Jerry Tillery did not have his fifth-year option picked up while safety Nasir Adderley, a second-round selection, has also been inconsistent.

The Chargers' offensive line has completely flipped over in just two seasons. Center Corey Linsley and left guard Matt Feiler were signed as free agents last year with left tackle Slater being selected in the first round. The Bolts addressed the line again in the first round this year with the selection of right guard Zion Johnson.

While Pipkins might wish he could have made progress quicker, he isn't regretting his journey so far.

“It all led to here, so I can’t complain about where I’m at now," he said. "There are times that I look back and I’m like, ‘Oh, I wish that I played a little better here,’ obviously, things like that. But it all led me to where I’m at now, and I’m ready to take advantage of it.”