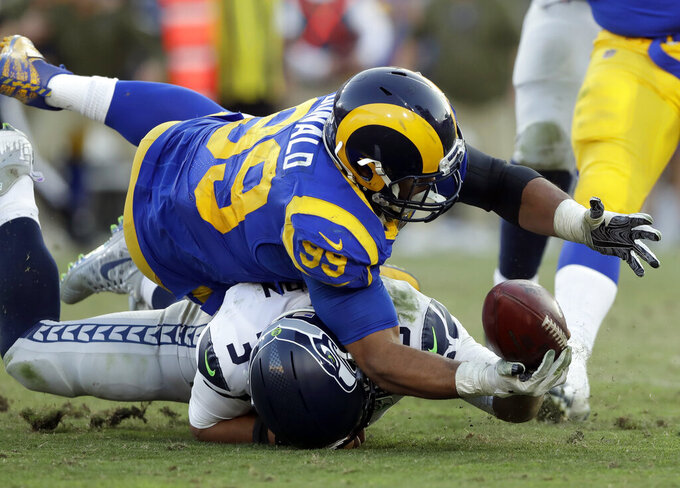 FILE - In this Nov. 11, 2018, file photo, Seattle Seahawks quarterback Russell Wilson (3) battles Los Angeles Rams defensive end Aaron Donald (93) for a ball Wilson lost on a fumble and returned for a touchdown by defensive end Dante Fowler during the second half in an NFL football game in Los Angeles. The Rams know they've got to pressure Tom Brady early and often to have a chance in the Super Bowl, and they've been assembling the tools for this job all year long. They signed Ndamukong Suh to a big free-agent deal, wrote a record-breaking contract for Aaron Donald and acquired edge rusher Dante Fowler from Jacksonville down the stretch. (AP Photo/Alex Gallardo, File)

ATLANTA (AP) — Practically every member of the Los Angeles Rams has a favorite story about Aaron Donald's feats of ridiculous athleticism.

Michael Brockers loved the moment at Carolina in 2016 when Donald beat the Panthers' left guard and launched himself like Superman, swallowing up Cam Newton while airborne.

Nickell Robey-Coleman preferred the game at San Francisco this season when Donald shredded a double-team and sacked C.J. Beathard — not by grabbing him, but by shoving the 49ers' center into his own quarterback.

"Aaron can do things you didn't know were possible," said Rams defensive tackle Ndamukong Suh, no stranger to improbable feats himself.

Donald is the NFL's current sacks champion, the only unanimous All-Pro and a probable two-time league Defensive Player of the Year. But Los Angeles' powerful defensive tackle has one more daunting task in the Super Bowl.

Donald and the Rams must figure out how to pressure Tom Brady, who completely stumped the New England Patriots' first two playoff opponents.

The Chargers and Chiefs never sacked the 41-year-old superstar while he sat comfortably behind his stellar offensive line and picked apart their defenses for 691 yards passing, completing 71.1 percent of his throws.

Donald, who set an NFL record for sacks by an interior lineman with 20½ this season, believes Los Angeles (15-3) can do what the Chargers and Chiefs couldn't.

"We'll get to him, but we have to stay patient and don't get frustrated," Donald said. "We've got a great secondary that will do its job and make sure he doesn't have easy throws. If he has to hold onto the ball, we'll have our chances. We just have to go get him."

The Rams have been assembling the tools for this job all year long.

In the spring, they signed the imposing Suh to a $14 million deal. They also acquired Aqib Talib and Marcus Peters, two elite cornerbacks who can create chances for their pass rush.

They gave a six-year, $135 million contract extension to Donald in late August, making their best player happy after two offseason holdouts. He responded with the best season of his stellar career.

Los Angeles then acquired edge rusher Dante Fowler from Jacksonville in late October, adding a speedy outside pass-rushing threat to a roster that lacked it. Fowler has 1½ sacks and six quarterback hits in the Rams' past four games — including the biggest hit of LA's season, forcing Drew Brees' overtime interception in the NFC championship game.

Fowler never became a superstar with the Jaguars, but he loves being a role player for LA.

"I knew I was going to fit in with this defense because of A.D. and Suh," Fowler said. "They make it easy for everybody else on the defense. They cause so many problems."

Donald, Suh and Brockers are a formidable defensive line, and their teamwork has improved each month. Although Donald doesn't have a sack in the Rams' two postseason games, he draws double-teams that free up Suh, who has 1½ sacks and four quarterback hits in an outstanding postseason.

Even if Donald and Suh win their individual matchups on the line, Brady's quick decisions and swift release make him awfully difficult for anyone to touch. He was sacked just 21 times in the regular season.

Although the Chiefs tied for the NFL lead with 52 sacks in the regular season, they hit Brady just once and never sacked him in the AFC title game. A week earlier, the Chargers' dynamic pass-rushing duo of Melvin Ingram and Joey Bosa never got to him.

Even if the Rams can't sack Brady, they must attempt to get him moving before his receivers' routes develop. That's an area in which Donald specializes: Although he faces more double-teams than just about any defensive player, he consistently penetrates the opponents' backfield regardless.

"There's nothing he can't do in regards to disrupting a game," Rams coach Sean McVay said.

When Brady doesn't face quick pressure, he is typically able to lacerate opposing defenses with short passes. Just ask the Chargers and Chiefs.

"That's crazy," Brockers said when told about Brady's sack-free postseason. "He's the G.O.A.T., but he's just another quarterback. He's going to try to avoid the pressure. It's our job as D-linemen to get to him, so we're putting the pressure on ourselves to try to influence him and try to get him off his spot."

The Rams believe they have the players for the job, and they also might have the scheme.

Defensive coordinator Wade Phillips' 3-4 defense stopped Brady in the 2015 AFC title game. Phillips' Broncos — including Talib — hit Brady 17 times and made him miserable while going 27 of 56 in the Patriots' 20-18 loss.

Fowler has studied video of that game for years now. He would love to play the role of Von Miller, who got 2½ sacks and an interception.

Phillips isn't getting into any specifics of the Rams' plan against Brady, camouflaging his sharp mind behind his usual geniality.

"Unfortunately for me, I get older, but Tom Brady doesn't," the 71-year-old Phillips said. "You don't stop great offenses. You just try to slow them down."