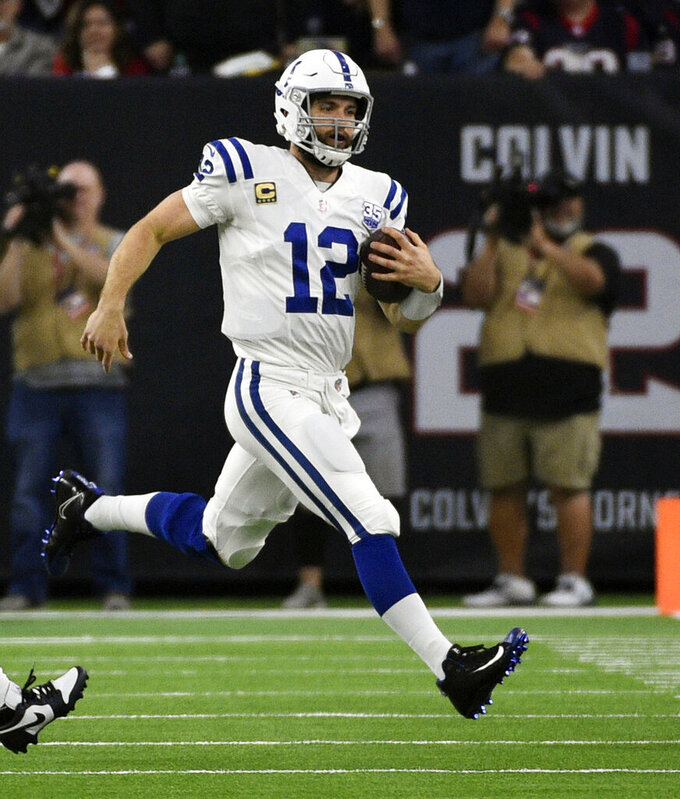 FILE - In this Jan. 5, 2019, file photo, Indianapolis Colts quarterback Andrew Luck (12) runs against the Houston Texans during the second half of an NFL wild card playoff football game, in Houston. The Colts play the Chiefs in a divisional playoff game on Saturday, Jan. 12, 2019.(AP Photo/Eric Christian Smith, File) 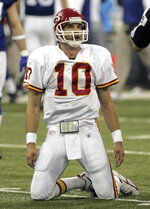 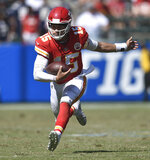 KANSAS CITY, Mo. (AP) — Given the postseason history involving Indianapolis and Kansas City over the years, Andrew Luck and the Colts have every reason to feel confident heading to Arrowhead Stadium on Saturday.

The Chiefs have every reason to believe they're due.

Four times the teams have met in the playoffs, twice in the wild-card round and twice with a spot in the AFC title game on the line. Each time the Colts emerged victorious. All but one were down-to-the-wire nail-biters, one a record-setting shootout and another a defensive slugfest, and each left Colts fans feeling euphoric and Chiefs fans feeling cursed.

Asked whether he understood the magnitude of the next installment in the one-sided series, Chiefs cornerback Kendall Fuller replied quite simply: "Oh yeah."

"Especially what they've been going through over the years and things like that," he said. "We definitely see how fans feel, what they're expecting and stuff like that."

There was the 1996 wild-card matchup in which Chiefs kicker Lin Elliott missed three field goals and the Colts won 10-7. The divisional showdown in 2003, when the Colts won 38-31 in a game featuring no punts. The 23-8 whitewashing three years later and, most recently, the 45-44 shootout in which Luck led the Colts from a 38-10 second-half hole to beat Andy Reid's first Chiefs team in 2013.

There are still more than a dozen players around who were involved in that game five years ago, yet each acknowledged this week that history has no bearing on what will transpire Saturday .

"Obviously they are a great team," said Colts kicker Adam Vinatieri, who has played in the past two playoff games against Kansas City. "They've won a lot of games. They've got a very explosive offense. They've got probably the best returner in the National Football League with (Tyreek) Hill.

"We are going to have to play our best game," Vinatieri said, "to try to keep up with them."

The Chiefs happen to believe the same thing.

Yes, they earned the No. 1 seed with their third consecutive AFC West title, and have arguably the game's best young quarterback in Patrick Mahomes. Hill joins Travis Kelce, a healthy Sammy Watkins and running backs Spencer Ware and Damien Williams in giving him plenty of weapons , while a defense that's been statistically poor also has more sacks than any other team.

Yet the Colts, the sixth and last seed in the playoffs, may be the hottest team playing . They rebounded from a 1-5 start to win nine of their last 10 games to reach the postseason, then dominated the Houston Texans last week with a bludgeoning ground game and stingy defense .

"The way this locker room has prepared," Luck said, "it's all about just getting better, getting better. ... It takes no heroes. You don't need a hero, whether it's a playoff game or a regular-season game. It's just everybody doing their jobs that get things done."

Of course, having a little playoff karma never hurts. The Colts certainly have that when it comes to Kansas City, while the Chiefs believe they long ago hit their quota of misfortune.

"All of us feel like we are here now and focused on the present day," Mahomes said, "and we feel like we have a different team, and that we can go out there and win a big football game."

Colts coach Frank Reich played 13 seasons in the NFL, and has spent most of the past decade working with quarterbacks. And he had high praise for Mahomes , who shattered just about every Chiefs passing record this season.

Colts running back Marlon Mack ran for a franchise playoff record 148 yards in their 21-7 win over the Texans . Now, he gets to face a Chiefs rush defense that was last in the NFL in just about every statistical category. "I think that's an indication of how our entire offense played," Luck said. "It's a combination of Marlon and the offensive line."

Much of the credit for the Colts' turnaround belongs to general manager Chris Ballard, who worked in Kansas City's front office before taking over in Indianapolis. It was Ballard that orchestrated two solid drafts and rebuilt the Colts defense. "I'm not surprised," Reid said. "He's got the energy to go get it. The energy and the eye to see it and go get it. That's important."

Chiefs defensive tackle Chris Jones had 15 1/2 sacks this season, while linebacker Dee Ford has 13 sacks and seven forced fumbles. But one of the most productive rush tandems in the NFL should have its hands full with an offensive line that allowed sacks on an league-low 2.7 percent of pass plays. "We're ready for the challenge," Ford said.

Colts wide receiver Ryan Grant (toe) has been ruled out, while defensive lineman Tyquan Lewis is doubtful with a knee injury. The big question for the Chiefs is strong safety Eric Berry, who did not practice all week with a recurrence of the heel injury that sidelined him much of the season. He was listed as questionable on the final injury report.