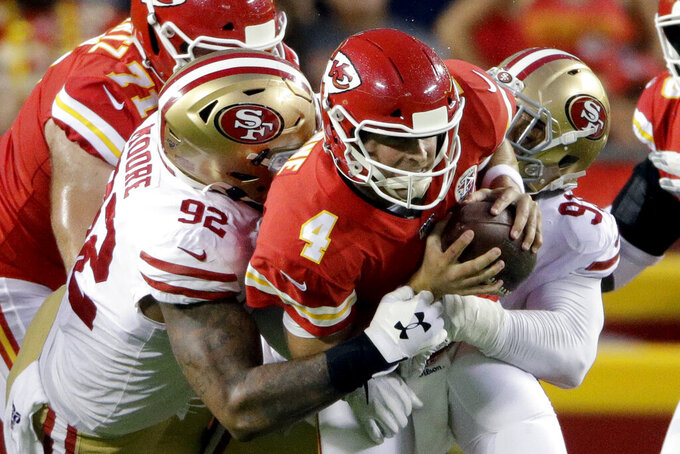 The Chiefs have two other quarterbacks on their roster in Chase Litton and Kyle Shurmur, but neither of the developmental prospects has distinguished himself during the preseason.

"Unfortunately, injuries happen, but one thing I do know is that our medical staff, our head coach and our personnel staff are going to make the best decisions for us moving forward," Chiefs offensive coordinator Eric Bieniemy said. "You never want to see anyone get hurt in this industry, but one thing we understand is that we have two young guys. We have to get them up and coming."

That was before the Chiefs added an older guy to the mix.

The 35-year-old Moore sat out last season after starting a pair of games for Miami in 2017, the end of a seven-year tenure with the Dolphins that began as the starter and ended as their backup. Moore also spent three seasons with Carolina, and is 15-15 in 30 starts.

He never had the kind of options at his disposal that he would have in Kansas City, though.

Mahomes is coming off a record-setting debut as starter, along with a league MVP award, thanks in part to wide receivers Tyreek Hill and Sammy Watkins and tight end Travis Kelce. The Chiefs also have a speedster in rookie Mecole Hardman and an up-and-coming star in running back Damien Williams.

"It's definitely going to be different with Chad, just because he was that veteran guy that was out there on the field," Mahomes said. "We have a lot of trust in these young guys to come in and step in and make plays. They've done a good job of picking up stuff, so we're going to keep bringing them along and letting them learn. I mean, Chad will still be there in the room helping out."

Henne, who broke his ankle Saturday in the Chiefs' game against the 49ers, will have surgery Tuesday in Green Bay, Wisconsin, which is coincidentally where Kansas City plays its preseason finale Thursday night. Dr. Robert Anderson is scheduled to operate.

Bieniemy acknowledged the injury changes the way the Chiefs were planning to approach the game.

Mahomes is still expected to sit along with the rest of the starters ahead of their regular-season opener Sept. 8 in Jacksonville. But now it will be Shurmur and Litton getting the majority of the snaps, particularly since Moore will be working feverishly to get up to speed.

"I will say this: These guys have done one heck of a job since they've been here," Bieniemy said. "They've made the most of every opportunity. You've seen some good and you've seen some bad, but one thing I will say about both of those guys, those two kids are very, very competitive."

Shurmur, whose father is New York Giants coach Pat Shurmur, signed with Kansas City in April as an undrafted free agent out of Vanderbilt. He threw for 3,130 yards with 24 touchdowns and just six interceptions his senior season, and has done a nice job of carrying that production into the NFL.

He was 9 of 12 for 67 yards in his time against San Francisco on Saturday night.

Litton, who signed as an undrafted free agent out of Marshall, is more experienced after spending last season on the Chiefs' practice squad. But he looked lost against the 49ers in the Chiefs' third preseason game, completing just one pass for 5 yards in mop-up duty.

NOTES: Chiefs trainer Rick Burkholder said WR Marcus Kemp will have surgery Tuesday in Dallas for the torn ACL and MCL he sustained against Pittsburgh. Kemp also had a meniscus injury. ... DE Breeland Speaks will have surgery Tuesday in Houston after spraining the MCL and damaging the meniscus in his right knee against the Steelers, Burkholder said.