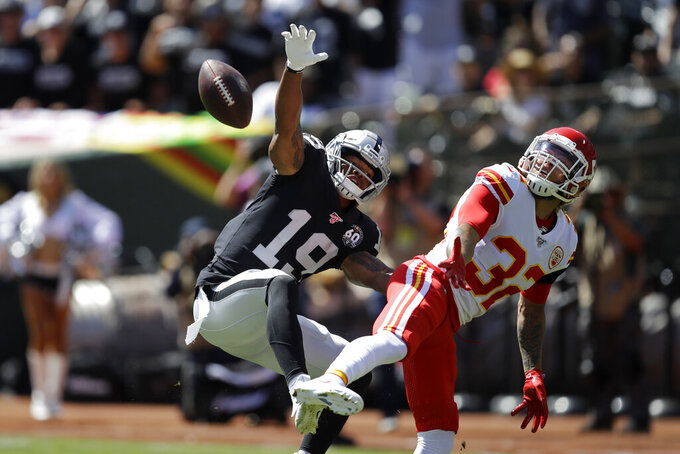 Oakland Raiders wide receiver Ryan Grant (19) goes up for a pass as Kansas City Chiefs strong safety Tyrann Mathieu looks on during the first half of an NFL football game Sunday, Sept. 15, 2019, in Oakland, Calif. A pass interference penalty was called on the play against the Chiefs. (AP Photo/Ben Margot) 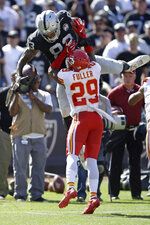 KANSAS CITY, Mo. (AP) — The Chiefs were in the mix to acquire Minkah Fitzpatrick before his trade from the Dolphins to the Steelers, and rumors have swirled that they might be interested in disgruntled Jaguars cornerback Jalen Ramsey as he seeks a trade of his own.

The Cardinals' Patrick Peterson has been a hot topic in Kansas City since the offseason.

But none of those defensive backs will be on the field Sunday, when the Chiefs host the Ravens and red-hot quarterback Lamar Jackson in their home opener. Kansas City heads into Week 3 with the same cast of characters on defense that have looked alternatively shaky and stellar this season.

"Brett (Veach) does all of that. He allows me to concentrate on the football part of it," Chiefs coach Andy Reid said, neatly punting to his general manager on a question about the club's interest in acquiring another cornerback.

"The speculation?" Reid said. "I don't go there with all that."

Leave it to everyone else.

Fitzpatrick would have been an ideal fit in Kansas City, with his combination of age, ability and disposition making him the perfect addition to the locker room. But he's no longer available, so Ramsey has become a favorite topic of armchair GMs chasing a Super Bowl championship.

Nobody denies Ramsey's ability — he may be among the five best cornerbacks in the NFL — but his personality could conflict with a tight locker room. There was the armored car stunt he pulled during training camp, and his recent conflicts with Jaguars coach Doug Marrone have raised eyebrows.

Peterson has been a popular target among fans, too. But the Cardinals have shot down any talk of a trade, and the 31-year-old cornerback would amount to a short-term rental for the Chiefs.

In other words, the Chiefs may be forced to roll with what they have.

That may not be such a bad thing.

The Chiefs were skewered by Jaguars backup Gardner Minshew in Week 1 against Jacksonville, but some of those troubles must be put into perspective. It was the first go-around for their new 4-3 set under defensive coordinator Steve Spagnuolo, and it was the first time for a whole bunch of new faces to get on the field together — safety Tyrann Mathieu, cornerback Bashaud Breeland and others.

They fared much better against the Raiders, shutting out their longtime AFC West rivals over the final three quarters. Derek Carr threw for just 198 yards with a touchdown and two interceptions, and his inability to pick up first downs allowed Kansas City to waltz to a 28-10 victory.

"The first two drives that took place, we could have easily hung our heads," Reid said, "but I think they stepped up and said, 'Listen, we're not doing this. We're going to tighten this up.'"

They were successful enough to cruise to a 2-0 start.

"The defense made adjustments," he said, "and we found ways to stop them."

More adjustments could be needed in a couple weeks, when Morris Claiborne finishes his suspension for violating the NFL's substance-abuse policy. He'll be a bit rusty after missing camp and the first four weeks of the season, but Claiborne is also coming off one of the best years of his career.

Fitzpatrick, Ramsey and Peterson may not be options, but help could still be on the way.