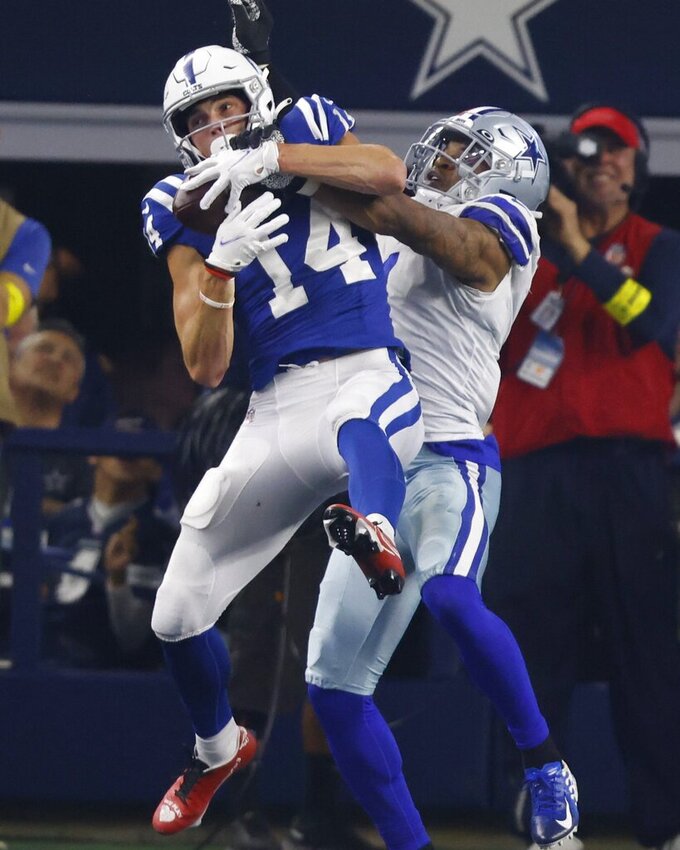 So far, Indianapolis has been a prime-time flop.

From the ugly October overtime win at Denver to last Monday night's fourth-quarter collapse against Pittsburgh to Sunday night's disastrous fourth quarter in Dallas, not much has gone right on the NFL's most visible stage.

Mostly, it's been embarrassing.

“I haven’t been involved in many losses in general, but definitely not like this,” interim coach Jeff Saturday said shortly after the game. “I think we went four possessions in a row with a (turnover). You’re not going to beat anybody in the NFL, but you’re dang sure not going to beat a good football team that way.”

The Colts (4-8-1) haven't beaten many good teams this season.

They've now lost three in a row with Saturday at the helm and six of their past seven overall, the only win coming at Las Vegas in Saturday's head coaching debut. Only two of Indy's victories have come against teams with more wins — Kansas City (9-3) and the Raiders (5-7). The tie came at Houston (1-10-1).

But they've saved some of their worst performances for prime-time audiences.

The forgettable game at Denver featured no touchdowns and is widely considered one of the league's worst games all season. Against the Steelers, a game in which both offenses struggled, the Colts showed some spark with two third-quarter touchdowns to take a 17-16 lead, only to blow a fourth-quarter lead in their third consecutive home game.

On Sunday night, Indy kept interested fans around three quarters. Then Dallas converted four turnovers into four fourth-quarter touchdowns including a fumble return for a TD by former Colts safety Malik Hooker, turning what had been a 21-19 contest into such a lopsided affair Indy quarterback Matt Ryan ended the game by taking a knee.

They have one more prime-time game, the Monday after Christmas, when the Los Angeles Chargers visit Indy. Perhaps by then, the Colts can put on the kind of show Irsay and others inside the organization envisioned.

“Not a whole lot to add from last night, obviously disappointing loss, terrible, terrible way to end it in the fourth quarter,” Saturday said Monday. “Frustrated by it, disappointed but not discouraged. We're going to keep building. Nothing's changing. We’re not changing who we are, we just have to be better at it.”

Jonathan Taylor. He's not gashing teams as he was this time last season, but the defending rushing champ seems to have put this season back on track. Against a defense designed to slow him down, Taylor still rushed 21 times for 82 yards and caught three passes for 21 yards. He's had at least 90 total yards in all four games since Saturday replaced the fired Frank Reich.

Turnovers. While the Colts defense has only 12 takeaways this season, after generating 33 last year, the bigger problem has been a league-high 26 giveaways. That's five more than the next-closest team, New Orleans, and it's proved to be the difference in more than just this past game.

Alec Pierce. The rookie receiver had four receptions for 86 yards, none more impressive than his contested 15-yard TD catch that got Indy back into the game in the third quarter. It was a solid rebound from a November to forget when he caught just four passes for 51 yards.

Ryan. Not all of the team's five turnovers Sunday night were Ryan's fault. But the 37-year-old threw poorly throughout the game and made some bad decisions, too. The result: three more interceptions and another lost fumble, giving him a league-high 18 turnovers this season as he closes in on a career high (21). It's prompted questions about yet another quarterback change.

Indy didn't suffer any additional major injuries in Dallas and now has a bye week to get healthy. The hope is Pro Bowl CB Kenny Moore II can return from an ankle injury that kept him out Sunday. His absence was notable as CeeDee Lamb repeatedly burned the Colts secondary.

33 — Indy kept it close until unraveling in the final 15 minutes when Dallas scored 33 points. It was the second-highest fourth-quarter point total by any team in league history.

The bye week finally gives Saturday a chance to catch his breath and meet with the assistant coaches to contemplate what can still be fixed this season. With four games left and the Colts on the verge of being mathematically eliminated from playoff contention, Saturday has promised his team will keep fighting. Fans, meanwhile, seem more inclined to start getting ready for next season and April's draft.