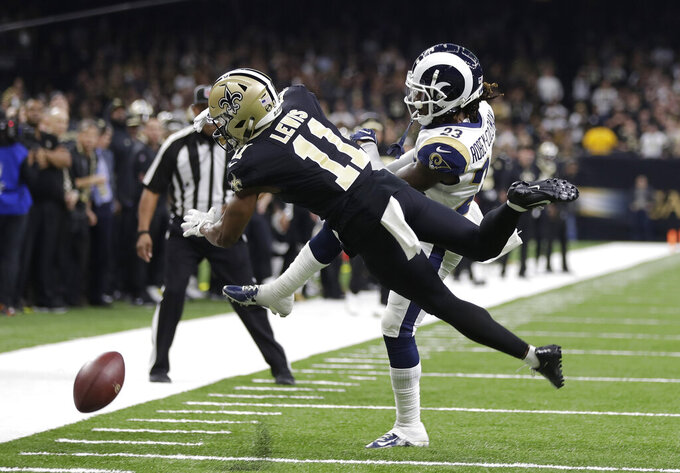 KANSAS CITY, Mo. (AP) — The last thing the NFL would ever want is for an officiating mistake to decide the Super Bowl.

On Sunday, the league might have made enough errors to determine both teams that will play in the championship game in two weeks.

The most egregious gaffe came in the NFC title game in New Orleans. The Saints were in position to put away the Rams when Tommylee Lewis blatantly was interfered with inside the Los Angeles 5-yard line by cornerback Nickell Robey-Coleman. Not only did Robey-Coleman hit Lewis early, he did so helmet to helmet. Next weekend, we'll hear about Robey-Coleman being fined for the collision — even though, incredibly, no flag was thrown.

"Came to the sideline, looked at the football gods and was like, 'Thank you,'" Robey-Coleman said. "I got away with one tonight."

Such a big one that it kept the Rams alive. Instead of a first down and the chance to run down the clock before making a field goal, or score a touchdown for a bigger lead, the Saints wound up with Wil Lutz's 31-yard kick. That made it 23-20 with 1:41 left in regulation, plenty of time for the Rams to march to Greg Zuerlein's tying 48-yard field goal.

"Greg The Leg" won it with a 57-yarder in OT. His heroics almost certainly never would have happened had the call on Robey-Coleman been made. And the fact the defender led with his head into Lewis' helmet at a time when the NFL is adamant that it's doing everything to get such hits out of the sport should be even more maddening.

"They felt like the players — the player — arrived at the same time that the ball did," Saints coach Sean Payton said, trying to be diplomatic when he had every right to rant and rave. "They didn't feel like it was an interference call.

"Look, it's a tough way to lose a game, especially when you're in a position like that to win it. It's all the more reason why we need more replay. We lose a chance to go to the Super Bowl with a call like that, it's just disappointing. But, credit the Rams. They did a good job, made the plays in the end when they needed to."

Plays that wouldn't have existed if Bill Vinovich's crew got it right.

An argument often is made, and rightly so, that plays seen in slow motion become clearly illegal, but at full speed in an increasingly fast and physical game, they look OK. That contention has no place here; even at warp speed, Robey-Coleman's hit was obviously a penalty.

"It's tough to get over it," Payton said. "My problem with it is, I just don't know, if we were playing pickup football in the backyard ... it was as obvious a call — and how two guys can look at that and arrive at their decision? It happened though."

A few things happened in Kansas City, too, where the Patriots won 37-31, also in overtime. These had more to do with replay, with two critical calls going New England's way in the fourth quarter.

The first, which required a lengthy video review, involved Julian Edelman muffing a punt. The original call was that the bouncing ball touched him. Replays, even in stop motion, seemed inconclusive, which means the call should stand.

But Riveron and his staff in New York saw enough evidence that Edelman never made contact with the football. Even Kansas City's laid-back coach, Andy Reid, became highly demonstrative with the overturned decision. Who could blame him considering how many dozens of such calls stick with what on-field officials determined?

The Chiefs, perhaps in a dose of poetic justice, soon after intercepted a pass that went off Edelman's hands.

But later in the quarter, Chris Hogan attempted a one-handed catch on third down. Reid challenged, and replay indicated far more evidence the ground helped Hogan make the catch than the previous review showed Edelman whiffed on the ball.

No matter. The catch was upheld, and six plays later, Sony Michel scored a touchdown.

Chiefs linebacker Dee Ford also went offside on the Patriots' final drive in regulation, negating an interception by Charvarius Ward that could have clinched a win. But there was little controversy there.

The league has been under heavy scrutiny and drawn massive criticism about its officiating in the last few years. The perception is that the NFL needs full-time officials, which might help somewhat, and in part is being done.

However, the deeper issues are too many rules and tangents to those rules; points of emphasis that get hammered in, then seemingly are discarded; and officials who struggle to keep up with the speed of the sport. The league prizes experience, but when one of its most experienced crews blows a call so blatant that even the perpetrator acknowledges he caught a break, the storm of protest will rage.