Column: Sports let their guard down, COVID makes a comeback 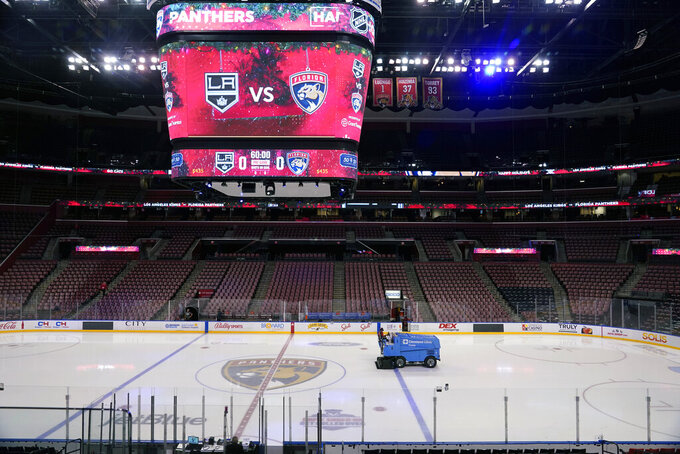 An ice resurfacer prepares the rink before an NHL hockey game between the Los Angeles Kings and the Florida Panthers, Thursday, Dec. 16, 2021, in Sunrise, Fla. The Panthers announced that eight players will not play due to the NHL's COVID-19 protocols. (AP Photo/Marta Lavandier)

When you saw the packed stadiums and arenas, when you knew that nearly all athletes had been vaccinated, when there was little mention of positive tests or quarantines, it was so easy to believe the worst was over.

Sports, it seemed, had survived the COVID-19 pandemic.

By taking their eye off the ball (or puck), professional and college sports left themselves susceptible to just the sort of chaos we've seen in recent days.

Games postponed. Practices canceled. Scores of players in isolation after testing positive or being around someone who did. The Cleveland Browns facing the possibility of starting a quarterback they just signed off the practice squad.

The virus has made a rousing comeback.

On Friday, t he NFL hastily pushed back three weekend games, including the one involving the Browns, to Monday and Tuesday. The NHL shut down two more teams, and the hard-hit Calgary Flames will remain on pause through the holiday break.

Even when games are played, they are often marred by those who aren't there.

In a rather ludicrous spectacle that passed for an NHL game, the Nashville Predators defeated the Colorado Avalanche 5-2 Thursday night with both rosters ravaged by COVID-19.

Colorado was losing players right up to the opening faceoff and took the ice with just 16 skaters — two fewer than normal. The Avs also dressed an emergency backup goalie.

Nashville had seven players sidelined by the virus protocols, not to mention its entire coaching staff. The Predators had to call up players from their minor-league affiliate in Milwaukee to fill in the gaps.

“It just seemed like one after another. It was weird," said Roman Josi, who scored for the Predators. "I don’t think any one of us ever went through something like that.”

The Avalanche were given the option of postponing the game.

They chose to play.

“I just went to our players and said, ‘Hey what do you guys want to do?’' Colorado coach Jared Bednar said. “We’re here to play a game. They were short-handed, we were short-handed. We’re not using COVID as an excuse.”

Less than 24 hours later, all games for the Avalanche and Florida Panthers were postponed at least through the Christmas weekend.

The NBA is dealing with the same sort of issues, along with several college hoops teams. A men's game was hastily thrown together Saturday in Las Vegas between No. 21 Kentucky and North Carolina after their original opponents — No. 15 Ohio State and No. 4 UCLA — pulled out because of COVID-19.

This comes on the heels of soaring infections in Europe, which has led the English Premier League to call off soccer matches and the German government to temporarily restricted Bundesliga arenas to 50% capacity or 15,000 fans.

Much of that depends of how effectively the pro leagues and college conferences are able to mitigate the spread of the virus in the next few weeks, a difficult task further hampered by the rise of the highly contagious omicron variant.

The NFL, which took a major hit when Green Bay quarterback Aaron Rodgers deceived the media and general public into believing he was vaccinated and flaunted virus protocols, announced Thursday a return to many of the stricter guidelines that were in place a year ago.

That includes everyone wearing masks at training facilities regardless of vaccination status, remote or outdoor meetings, no in-person meals, limiting the number of people in team weight rooms, and restrictions on activities outside the team facilities.

The NBA and its players also agreed to enhanced health and safety protocols through the holiday season.

The one thing that's not going to happen is a widespread shutdown of sports, like we saw at the beginning of the pandemic.

Sports lost billions of dollars in 2020. The owners are not about to let that happen again.

They'll likely get no objection to carrying on largely with business as usual from all those Americans who've decided that the best way to beat the virus is to simply ignore it.

Not surprisingly, that's been about as effective as a child covering his or her eyes to make something bad go away.

At least 800,000 Americans have died from COVID-19 in less than two years, according to John Hopkins University. Stunningly, far more people have died in 2021 than the previous year, even though highly effective vaccines are now widely available.

Many athletes who've tested positive show no signs of being ill, leading some to wonder if they should be forced to sit out when they feel perfectly normal.

Experts acknowledge there's little need to shut down for a few weeks or go to the sort of “bubble” system that allowed leagues to complete their 2020 seasons.

“We’re in a very different world from a year ago," said Dr. Peter Chin-Hong, an infectious disease specialist at the University of California, San Francisco. “It’s not too bad for young, healthy athletes.”

No argument there. But if athletes were allowed to compete while asymptomatic, they could pass on COVID-19 to someone who is at must greater risk. A coach, perhaps. Maybe a locker room attendant.

Here are some recommendations:

— Mandated vaccines. The players unions in every sport should sign off on requiring their members to take the jab. Getting vaccinated, then receiving a booster shot, remains the best protection against infection and serious illness. Every athlete should be vaccinated — or they can't play.

— Same for the fans. Pro leagues and colleges conferences should require proof of vaccination or at least a recent negative test to get into every arena (though this would surely be taken to court in some states). While there has been no evidence of a sporting event leading to a major outbreak, there is no need to take a chance.

— Stricter protocols. Like many of us, pro sports let down their guard when it looked like COVID-19 was waning. That was a major miscalculation. The NFL, as we mentioned, has restored many of the rules that were in place during the worst of the pandemic. They never should've gone away.

— Daily testing, and then some. The NFL Players Association raised questions several months ago about the league moving to weekly testing, which hampers the detection of outbreaks. “Once a week is so 2020,” Chin-Hong said. ”We have the technology to do it several times a day.”

Hopefully, at some point, we'll get to a stage in this horrible pandemic where most people are immunized and effective treatments are widely available.

Maybe there will come a time when COVID-19 is viewed as roughly the equivalent of the common cold.

But, as sports has discovered in recent days, we're not there yet.

Paul Newberry is a national sports columnist for The Associated Press. Write to him at pnewberry(at)ap.org or at https://twitter.com/pnewberry1963 and check out his work at https://apnews.com/search/paulnewberry